Couple suspected of negligence in Monday fire in North 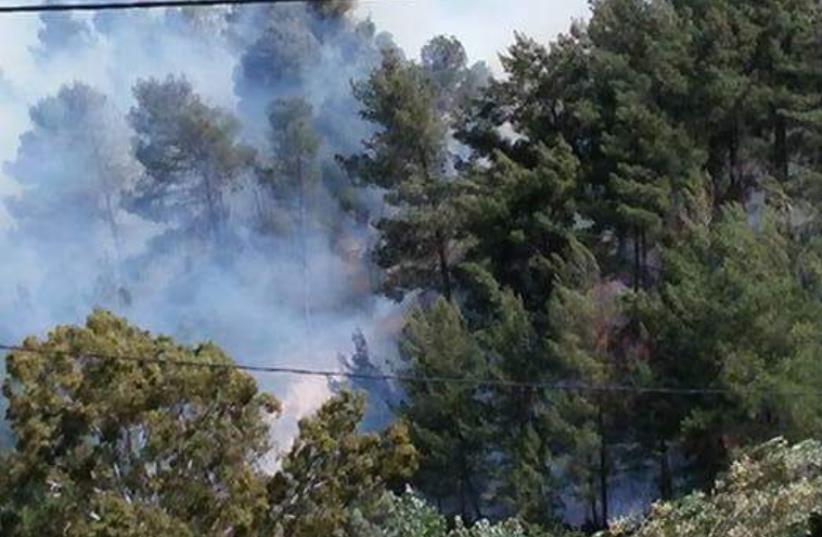 Fire breaks out in the North
(photo credit: Courtesy)
Advertisement
A dry, hot breeze wafted through most of the country Tuesday, with temperatures reaching record highs in this already unseasonably hot April.South of Lake Kinneret (the Sea of Galilee) a record-setting temperature for April of 40 degrees Celsius was reached at the Israel Meteorological Service’s weather station. The average April high at this spot is usually 28.3 degrees.Beersheba and Ashdod tied for second place with a high of 39 degrees in the late afternoon hours. Eilat, usually one of the country’s hottest destinations, had a 36-degree high.A cooling down is expected tomorrow as the IMS forecasts predict clouds in most parts of the nation and even some light rain. The high temperatures in most of the country are expected to be about 10 degrees lower in most spots by Wednesday.The heat didn’t seem to bother the hundreds of thousands of visitors to the parks and nature sites. The Israel Nature and Parks Authority reported at least 200,000 to its sites. Still, the plethora of tourists dramatically increased the threat of wildfires during the Passover holiday.Negligence is suspected of being a factor in a number of wildfires on Tuesday, including a forest fire that scorched hundreds of hectares outside Shlomi in the western Galilee.Police and firefighters deployed helicopters and other aircraft to fight the blaze, which also damaged a power line, causing electrical failures in the area.On the other side of the Galilee, a forest fire broke out in two spots next to the Jordan River near a popular rafting spot. The cause of this fire was not announced, and all visitors had to be evacuated from the area.In Jerusalem, two forest fires broke out on Tuesday, where temperatures hit a high of 33 degrees. One broke out near the Mount of Olives, but firefighters managed to contain it before it could cause any damage or injuries. Another blaze began in the city’s Peace Forest near the Abu Tor neighborhood. It, too, was contained, but residents of a nearby street had to be evacuated due to high levels of smoke.A couple from Beit Shemesh were questioned by police on Tuesday on suspicion of lighting a barbecue that sparked a forest fire the previous day outside Safed, forcing a partial evacuation of tourists and hikers from the area. The fire tore through a large section of the Biriya Forest, but firefighters were able to control the blaze by late Monday. Northern District police said on Tuesday that police and fire investigators are still working on the case, and that the couple is suspected of negligence. A spokesman for the district said that the couple told investigators that the wind suddenly picked up and their fire began to spread. They reportedly tried to put it out using water and all other means at their disposal, but when that failed, they called the fire department.At no point did they try to leave the scene, and they offered to help however they could, but they are still being investigated on suspicion of negligence, the police spokesman said.Police said no one was trapped by the fire, and no personal property was damaged.Light rain fell in Tel Aviv and other parts of the country Tuesday night, as the cooler air relieved the extreme heat.