Elkin: Israel should be part of Australian-led climate discussions

150 Australian volunteers clean up the shores of Lake Kinneret. 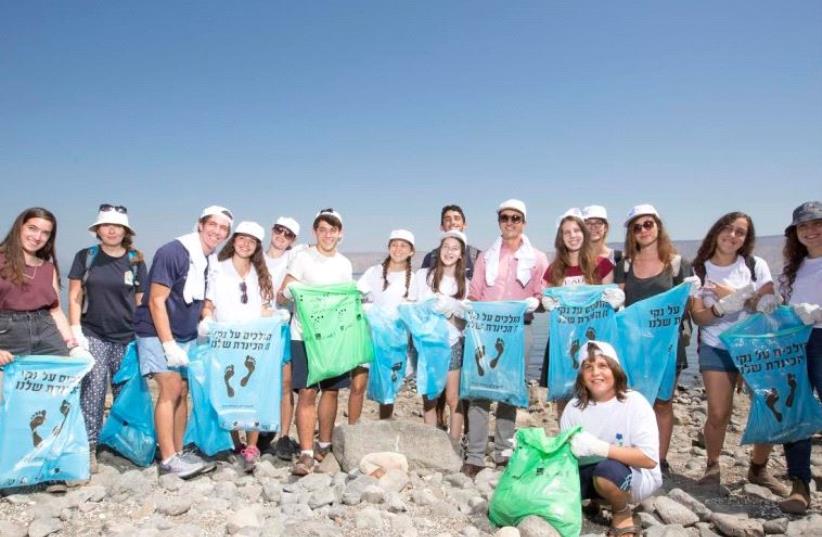 KKL-JNF, Australian Embassy and teens cleaning-up and collecting garbage at the Kinneret on Sunday w\ Australian Ambassador, Dave Sharma
(photo credit: MICHAEL HURI - KKL-JNF)
Advertisement
Israel should join a key circle of developed countries advancing the United Nations Framework Convention on Climate Change, Environmental Protection Minister Ze’ev Elkin told his Australian counterpart last week.During a meeting with Australian Environment and Energy Minister Josh Frydenberg in Canberra, Elkin stressed that Israel should become a full member, rather than an observer, of the UNFCCC “Umbrella Group,” to reflect Israel’s commitment toward reducing greenhouse gas emissions. Due to Australia’s chairmanship role in the group, Elkin requested that Frydenberg help Israel upgrade its status as a permanent participant in the body, the Environment Ministry said on Monday.The Umbrella Group is “a loose coalition” of non-EU developed countries that came together following the Kyoto Protocol – an international treaty adopted in 1997 that committed its parties to binding emission reduction targets. While the Umbrella Group lacks a formal membership list, its participants usually include Australia, Canada, Iceland, Japan, New Zealand, Norway, Russia, Ukraine and the US.In addition to discussing such matters, Elkin and Frydenberg spoke about opportunities for future cooperation between Israel and Australia in the environmental sector.“Israel and Australia historically have cultural and economic ties,” a statement from the ministry said. “The two countries also cooperate in the international arena. In this context, the two ministers agreed that climate change is one of the greatest challenges of our generation, with comprehensive environmental, economic and social impacts.”Elkin and Frydenberg reviewed the steps that each country is taking toward significantly reducing greenhouse gas emissions and achieving carbon neutrality, expressing their willingness to cooperate on relevant projects, according to the ministry. While Israel can bring to the table experience in clean-tech and water technologies, Australia has extensive experience in introducing energy-saving policies, the statement said.Following the meeting, Frydenberg instructed his director-general to work vigorously toward promoting the signing of a bilateral agreement for cooperation, in hopes that the ministers will meet again to sign such a pact by the end of this year, the ministry added.During the visit to Canberra, Elkin also met with various environmental bodies, in order to learn about how Australians handle some of the same challenges faced by Israel, such as coastal rehabilitation, sewage treatment and conservation, the ministry said.Unrelated to environmental fields, Elkin also met with Australian Foreign Minister Julie Bishop, as well as members of the Israel-Australia Parliamentary Friendship Group. He also attended Limmud FSU Australia, a festival which celebrates Jewish people from the “Former Soviet Union.”Just after last week’s ministerial visit to Australia, a delegation of some 150 Australian youngsters took to the shores of Lake Kinneret (Sea of Galilee) on Sunday, as part of international Clean Up the World Weekend.Clean Up the World Weekend – which this year officially took place from September 16 through 18 – is a community- based event that originated in Australia in 1990. The first UN Environment Program- sponsored Clean Up the World Day occurred in 1993, and the campaign has since mobilized some 35 million volunteers from 130 countries annually.Leading clean-up activities in Israel is Keren Kayemeth LeIsrael-Jewish National Fund. Together with Australian Ambassador Dave Sharma, embassy staff, the Kinneret Municipal Association, the Zionist Federation of Australia and the Kinneret Drainage Authority, KKL-JNF guided the Australian volunteers in their cleanup effort of the lake’s Zinbari beach. The volunteers made sure to separate garbage and recyclables, picking up litter under the hot sun, according to KKL-JNF.“The international clean-up day initiative, which started initially in Australia, has become an international tradition,” Sharma said. “One hundred years ago Australian soldiers fought right here against the Ottoman Empire to liberate the country, and now, Australian youngsters are here to safe keep and preserve it.”The clean-up activities in Israel will continue on Thursday morning, with a ceremony hosted by KKL-JNF in Afula. Meanwhile, Sunday’s Kinneret cleanup also marked the beginning of Australia week in Israel (OZRAELI), which celebrates the diplomatic, cultural and social cooperation between the two countries.“Our goal in the international day is to educate the young generation to be responsible and caring of the environment, to ensure a greener and cleaner environment for the current and future generation,” said KKL-JNF chairman Danny Atar. “It is not the first year that the Australian Embassy has joined the efforts, and I am thankful and appreciative of such, together we show that the environmental interest knows no boundaries.”