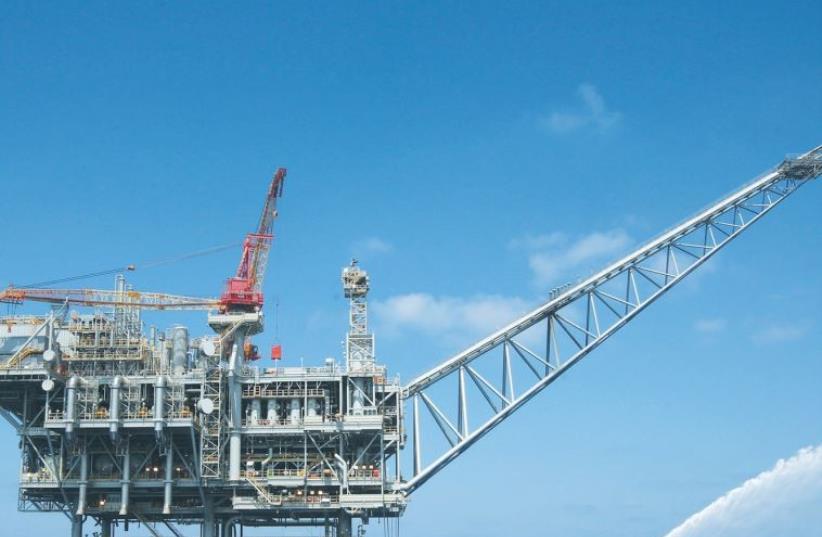 THE TAMAR gas field platform juts above the Mediterranean
(photo credit: MARC ISRAEL SELLEM)
Advertisement
The National Infrastructure, Energy and Water Ministry said on Wednesday said that the European Union is interested in receiving natural gas from Israel.According to a statement issued by the ministry, National Infrastructure, Energy and Water Minister Yuval Steinitz met with EU Ambassador to Israel Lars Faaborg-Andersen on Wednesday in order to “be updated on the time line regarding the development of gas reservoirs and the possibility of exporting natural gas from Israel to Europe.”The ministry quoted the envoy as saying that in the past few months, “the European Union’s interest in Israeli gas has been aroused” due to steps being taken to develop the 621-billion-cubic-meter Leviathan gas reservoir, as well as the prospect of finding more gas fields in Israel.Aside from the Tamar reservoir, which is active, the country has two smaller 70 BCM gas reservoirs Karish and Tanin, which have not yet been developed.At the meeting, according to the ministry, Faaborg-Andersen informed Steinitz that the EU’s commissioner for Climate Action and Energy, Miguel Arias Cañete, is expected to come to Israel on an official visit in the near future.A spokesman for the EU delegation had no comment.If the ministry’s statements regarding European interest prove true, they could be significant since there have been no formal moves nor letters of intent regarding gas export.So far, according to sources close to the industry, Leviathan’s biggest potential customers are in Egypt, Jordan and the Palestinian Authority.The meeting comes two days after Steinitz met with Noble Energy Inc.CEO David Stover, along with other company officials, to present him with the project’s timetable, as well as data on the gas field’s advancement, in hopes that it will “accelerate Leviathan’s development.”Houston-based Noble Energy owns a 39.66 percent stake of the Leviathan reservoir, while Delek Group subsidiaries Delek Drilling and Avner Oil Exploration each hold 22.67%, and Ratio Oil Exploration has a 15% share.