Environment Ministry: Israel must reduce greenhouse gas emissions by 30% by 2030 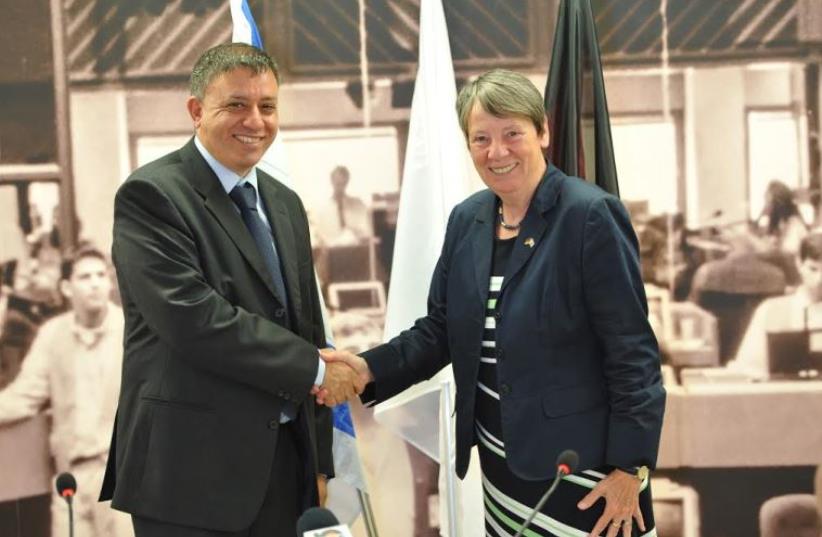 Environmental Protection Minister Avi Gabai with German Environment Minister Barbara Hendricks
(photo credit: AVIAD WEIZMAN)
Advertisement
To meet the standards of other OECD nations, Israel should reduce its greenhouse gas emissions by 30 percent by 2030, at the same time saving some NIS 125 billion, Environmental Protection Ministry officials recommended on Tuesday.The officials announced the target and other relevant goals at the Innovation and Sustainability Conference in Tel Aviv, convened by the Environmental Protection Ministry, the Economy Ministry and Germany’s Federal Ministry for the Environment, Nature Conservation, Building and Nuclear Safety.During the meeting, which took place ahead of December’s Conference of Parties (COP-21) in Paris, the Environment Ministry stressed the importance of adhering to the targets, which were formulated by an interministerial team.“Israel has all the conditions necessary to lead to an advanced climate policy: We have gas, sun, financing and brains that know how to find solutions,” Environmental Protection Minister Avi Gabai said. “Our plan will leverage all of these advantages to create a growth engine for the economy, and the technology developed here will provide solutions for dealing globally with climate change.”Participant nations in December’s COP-21 aim to forge a legally binding and universal agreement to ensure that global warming does not surpass 2° C. It will be the 21st such annual conference to take place as a result of the Rio Earth Summit in 1992, during which countries adopted the United Nations Framework Convention on Climate Change (UNF - CCC). Before COP-21, all participant nations are expected to submit their intended nation - al determined contribution (INDC) plans.Now that the interministerial committee has unveiled its recommendations on greenhouse gas emission targets, the government needs to approve Israel’s INDC – a decision that Environmental Protection Ministry officials said they hope will be made by September, enabling INDC submission to the UNFCCC later that month.In addition to curbing greenhouse gas emissions by 30%, the interministerial team recommended a variety of related measures.As far as energy efficiency is concerned, the team said there is great potential for savings through significant changes in industry and in energy management, as well as producing electricity through cogeneration. Such steps could save about 18% of Israel’s electricity consumption – or billions of shekels – and prevent unnecessary power plant construction, Environment Ministry officials said. The team like - wise suggested establishing a national fund to increase energy efficiency and create financial incentives to invest in green construction.Within the electricity sector, prioritizing gas over coal and diesel will be critical moving forward, to significantly reduce greenhouse gas emissions and air pollution, the committee determined.Also crucial to the electricity sector will be the swift advancement of renewable energy, the officials said. Increasing the proportion of renewable sources in the electricity generation mix to 22% by 2030 would decrease greenhouse gas emissions by about 20% of the total required reduction, according to the interministerial team.Regarding public transportation, the committee members determined that the imple mentation of medium- and long-term development plans in the sector by 2030 would see 25% of private transportation users switch to mass transit. The increased use of rail systems and trucks and buses operating on compressed natural gas rather than diesel could increase quality of life by reducing air pollution and easing traffic congestion, the committee said.“We can dramatically change the amount of green-house gas emissions with the help of an easing in bureaucracy, the adoption of new technologies and partnerships with the business sector,” Gabai said.German Environment Minister Barbara Hendricks discussed climate action’s role as “an important driver for the national economy, especially in a technologically advanced country like Israel."“An economy geared to climate action and focusing on energy efficiency offers major opportunities for growth,” she said.Hendricks described how Germany has reduced its greenhouse gas emissions by 27% since 1990, during which time the country’s economy has grown by 39%. Taking such action, she explained, “is a prerequisite for competitive and forward-looking economic activity – and hence for sustainable prosperity.”On the sidelines of the Tel Aviv conference, Hendricks and Gabai signed a joint declaration of intent to cooperation on air quality control, to promote an exchange of knowledge among German and Israeli experts. The countries also marked the 50th anniversary of diplomatic relations.Regarding COP-21, Hendricks expressed her support for reach an agreement among the participant nations in Paris.“Paris must send a clear signal: We need a joint decision by all countries to follow a low-carbon and climate-friendly development path,” she said.Other participants at the Tel Aviv event include Environmental Protection Min - istry director-general David Lefler and outgoing National Economic Council chairman Eugene Kandel, as well as representatives from the OECD, UNFCCC, Deutsche Bank and DENEFF – the German Industry Initiative for Energy Efficiency.Before the Environment Ministry’s announcement of the targets, Adam Teva V’Din (Israel Union for Environmental Defense) criticized the interministerial committee’s work, stressing the need to meet greenhouse gas emissions targets by 2020, rather than by 2030.The organization pointed out that in 2010, the cabinet passed a decision to have 10% of all electricity production from renewable sources and increase energy efficiency by 20% by 2020.Another pledge Adam Teva V’Din said Israel has failed to live up to was a 2009 declaration made by then-president Shimon Peres at the Copenhagen COP-15, that the country’s would reduce greenhouse gas emissions by 20% by 2020.In a policy paper written in reaction to the interministerial recommendations, Adam Teva V’Din demanded that the original 2020 goals on renewables and efficiency be satisfied, as well as a reduction in greenhouse gas emissions by 25% in 2025, compared to those in 2000. The group emphasized the need for the electricity supply to be based 50% on renewables by 2030.“This plan needs to be part of a long-term vision toward developing a sustainable energy economy, weaning off the use of fossil fuels and significantly reducing greenhouse gas emissions,” the NGO said.