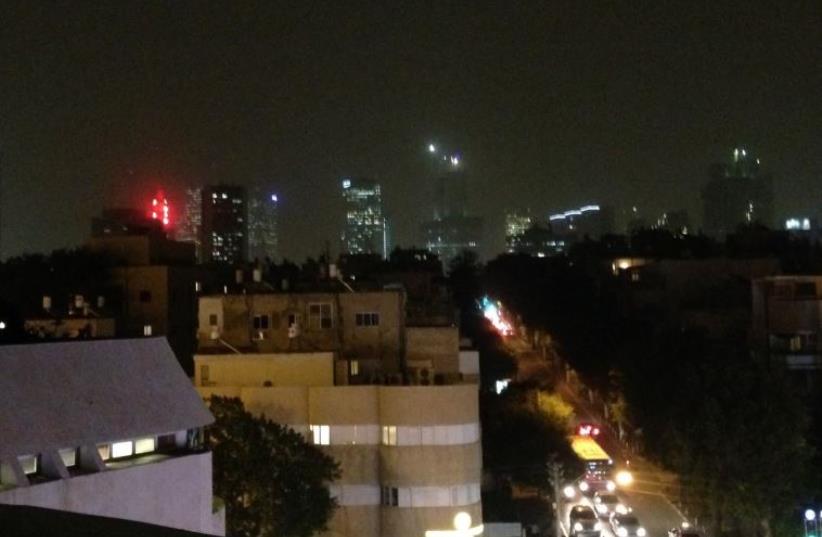 Hazy night sky in Tel Aviv on November 3, 2015
(photo credit: AVSHALOM SASSONI)
Advertisement
High levels of air pollution engulfed the entire country Tuesday evening as a strong southeasterly wind flow caused a dust transport to Israel from Saudi Arabia and Jordan.With the dust levels expected to remain high through Wednesday, the Environmental Protection Ministry advised all sensitive population members, including those with heart and lung conditions, the elderly, children and pregnant women to avoid strenuous physical activity.As a result of the hazy weather that overtook Jordan prior to reaching Israel, a Royal Jordanian Airlines plane traveling from Dubai to Amman was forced to make an emergency landing at Ben-Gurion Airport Tuesday afternoon. Israel has no diplomatic relations with the United Arab Emirates.The plane, carrying 66 passengers and crew members, requested to land in Tel Aviv due to difficulties landing in Amman, leading to a shortage of fuel and declaration of emergency, the Israel Airports Authority said.“The plane landed in Israel because weather conditions in Amman did not allow for landing,” a statement from Royal Jordanian confirmed. “Because the flight time was prolonged, little fuel remained and [the plane] requested to land at Ben-Gurion Airport as soon as possible. The flight landed safely.”At Ben-Gurion Airport, ground crew workers were pictured delivering boxes of the Israeli chocolate dessert “Krembo” to passengers onboard the aircraft.As warnings of hazy conditions began, Israel Electric Corporation stressed on Tuesday that its teams were preparing the national grid to withstand the weather threats. Last week, the company encountered multiple days in which tens of thousands of households suffered from power outages during intense storm conditions.“The combination of dust and rains has the potential to disturb the power supply, and the company is preparing accordingly,” a statement from the company said.The Israel Meteorological Service forecast isolated showers and thunderstorms, with hazy conditions prevailing in most areas for overnight Tuesday into Wednesday.A risk of flash floods in the eastern and southern wadis also was expected, with a slight drop in temperatures nationwide and strong easterly winds in the North and the mountains.By Thursday, the IMS predicted continued isolated showers and a chance of isolated thunderstorms, with the same risk of flash floods and slightly cooler temperatures.The haze was expected to subside gradually, the IMS said.For Friday and Saturday, the IMS again forecast isolated showers and a chance of isolated thunderstorms, as well as the risk of flash floods in the eastern and southern wadis.