Green groups and politicians have long seen the container, which stores all ammonia imported by Israel, as a “ticking time bomb.” 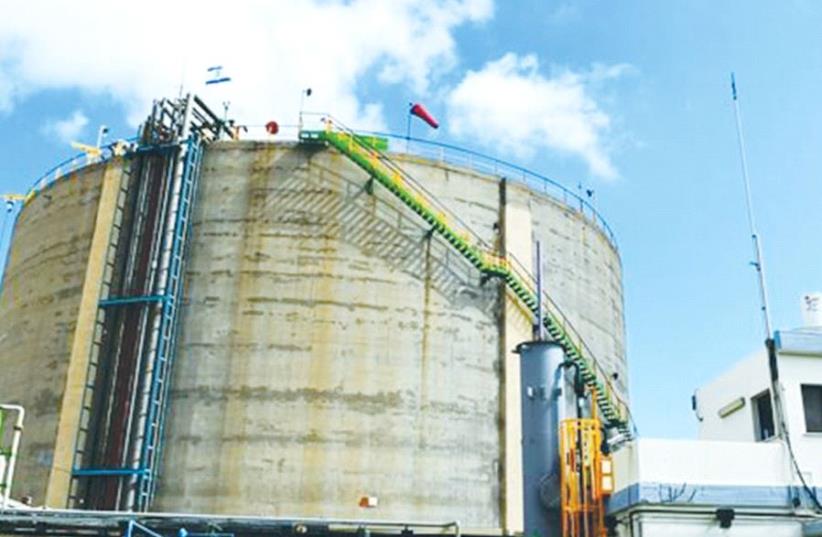 THE ENVIRONMENTAL PROTECTION MINISTRY will not renew the toxin permit for Haifa’s ammonia storage tank when it expires on March 1.
(photo credit: MATAN NAIM)
Advertisement
In a move that will shut down Haifa’s controversial ammonia storage tank by spring, Environmental Protection Ministry officials said Wednesday they will not renewing the facility’s toxin permit when it expires on March 1.To enable the industry to find an alternative supply of ammonia and ensure that provisions exist in a state of emergency, the facility will be allowed to continue importing ammonia until June 1, but, according to the ministry, no further unloading of ammonia into the tank may take place after March 1 unless it is proven that the existing amount of ammonia is insufficient for the economy during the transition period.The 12,000-ton ammonia processing and storage facility, operated by Haifa Chemicals in the Haifa Bay Industrial Zone, has been the subject of disputes and legal battles of late as the Haifa municipality and environmentalists fought for its closure. Green groups and politicians have long seen the container, which stores all ammonia imported by Israel, as a “ticking time bomb.”
Aerial police footage of the oil refinery explosion and fire in Haifa on Dec. 25, 2016 (credit: ISRAEL POLICE)
The tank began garnering international attention a year ago when Hezbollah chief Hassan Nasrallah threatened to attack it. Although ammonia is widely used in industrial refrigeration and fertilizer production, it is also a highly toxic gas once exposed to open air.“The container places the public and the environment at risk and we cannot accept this,” said Environment Protection Minister Ze’ev Elkin.In 2013, the government decided that the contentious ammonia tank would eventually be shut down and moved to a far less-populated location, Mishor Rotem in the Negev. However, the Environmental Protection Ministry announced in November that the tendering process for the transfer had failed.Earlier this month, the Haifa Municipality turned to the Haifa Local Affairs Court to demand the facility’s closure, following the publication of a report commissioned by the city that concluded that a strike on the facility and ammonia- delivery vessels could be catastrophic to the region. While an attack on the container itself could lead to the deaths of thousands of residents, the report said an attack on the ships conveying the ammonia to the region could kill hundreds of thousands – “numbers that were inconceivable in any apocalyptic scenario ever described by the security establishment in the State of Israel.”Soon after the report, the court ruled that the ammonia tank be emptied within 10 days, but Haifa Chemicals appealed the decision and the court delayed the implementation of its initial ruling until a further discussion on the matter scheduled for February 26.Elkin said Wednesday that, during recent hearings with Haifa Chemicals, ministry officials had asked the company to present a suitable alternative with a clear schedule regarding the future of the tank, but that because the company’s management did not follow through and the tender process for the southern facility failed, the ministry had “no choice but to decide on the nonrenewal of the toxins permit.”Haifa Chemicals responded to the ministry’s ruling, saying the company “is studying the decision and will act in accordance with the law.”MK Amir Peretz (Zionist Union), who served as environment minister in 2013 to 2014, praised the move, but said the right decision will include opening a facility in the Negev.“It is up to the government to close the plant and remove this horrific danger from the citizens of Haifa and North,” he said. “The suitable solution to this situation is reopening it in Mishor Rotem, and by doing that it would also create places of work in the South.”“Luckily, the court saved the public from danger, and its decision, which motivated the government to act, might have prevented a large-scale disaster,” he continued.MK Yael Cohen Paran (Zionist Union), chairman of the Knesset Haifa Bay Caucus, called on the government to implement the move immediately.“The northern front heating up puts us in a great security danger in the next three months, [and] we should not keep this option [hitting the plant] open to them.”