The highest temperatures on Sunday occurred in the Jordan Valley and the Arava region, at 43-46°C. 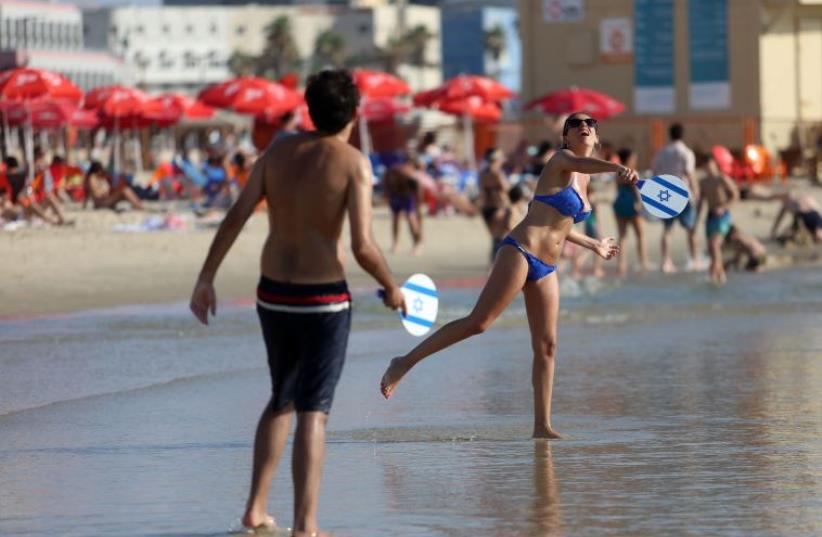 General view of Tel Aviv beach
(photo credit: MARC ISRAEL SELLEM/THE JERUSALEM POST)
Advertisement
For this second time this month, Israelis experienced the sizzling temperatures of an extreme summer heat wave on Sunday. While mercury levels did not quite climb to 49°C as they did earlier in the month, several places around the country achieved location specific all-time highs, according to Israel Meteorological Service data. Sunday was the peak of the heat wave – also known by its Hebrew term sharav – that began on Sunday and is expected to last the next few days, though with slightly cooler temperatures, said Dr. Amos Porat, head of the IMS Climate Department.The last heat wave, which began on August 2 and continued for about a week, was the result of an upper air ridge with high pressure, Porat explained. The latter part of that event, however, was influenced by a dynamic sharav depression more typical of the spring, he said. As a result, many areas such as the coastal plain, which usually experience muggy conditions during summer heat waves, actually encountered very warm and dry weather, Porat added. Like the end of the last heat wave, the current event is also the result of a dynamic sharav depression, Porat explained. Yet due to the fact that the system became very shallow as it reached Israel, the warm conditions have been accompanied by dryness in the inner regions and mugginess in the coastal plain, he said. The highest temperatures on Sunday occurred in the Jordan Valley and the Arava region, at 43-46°C, according to IMS data. Temperatures climbed to 41-43°C in the northern valleys and the northern Negev, 38-40°C in the Shfela and the southern Golan Heights and 36-37°C in the country's mountain ranges. The coastal plain received mercury levels of 35-37°C with a relative humidity of 60-70 percent, while the Mediterranean beach strip felt a cooler 31°C but with a relative humidity of 80%, the IMS said.  Although both the ongoing heat wave and that of earlier August are considered extreme events, the IMS stressed that such occurrences are by no means rare. Nonetheless, during both episodes, several local records were broken. On Sunday, IMS stations at Nir Haemek near Afula topped charts with 41.5°C as well as at Ein Horesh, with 37.6°C, the data said.