Although this jellyfish is not harmful to humans, its arrival serves as a warning that many much more dangerous creatures could be capable of invading Israel's waters as well, the researchers warned. 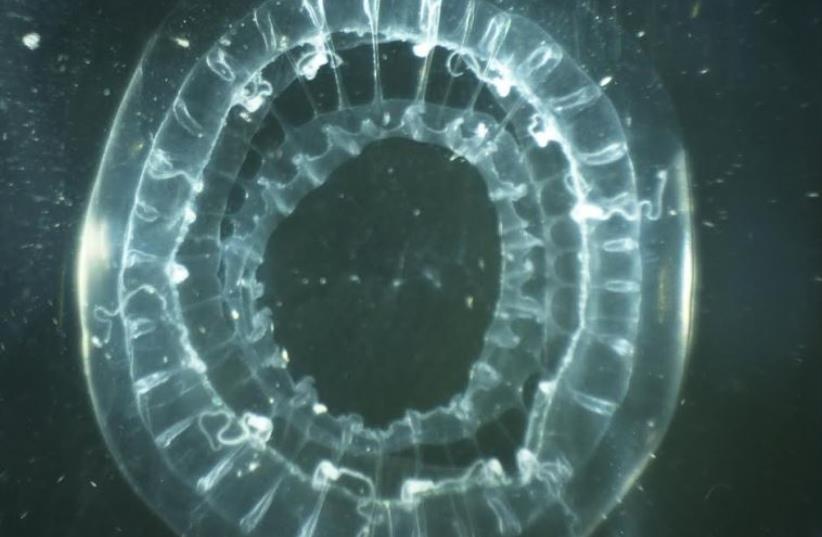 Fluorescent green jellyfish which migrated to the Mediterranean from Japan
(photo credit: UNIVERSITY OF HAIFA)
Advertisement
A fluorescent green jellyfish native to East Asia has found its way into Israel's Mediterranean waters, researchers at the University of Haifa recently observed. Most commonly found in the waters of Japan, the transparent and fluorescent jellyfish likely immigrated to Israel via the ballast waters of commercial vessels, the university said. The Aequorea macrodactyla jellyfish was identified during a routine survey performed by Dr. Gur Mizrahi, a researcher at the university's Leon H. Charney School of Marine Sciences in Dr. Dan Tchernov’s DEEP MED laboratory. Although this jellyfish is not harmful to humans, its arrival serves as a warning that many much more dangerous creatures could be capable of invading Israel's waters as well, the researchers warned. "This is a unique jellyfish, particularly because it contains a green colored fluorescent protein, whose role – despite many theories – is still not clear to science," Mizrahi said. "Despite its small body of just a few centimeters, it is considered to be filled with plankton and small crustaceans, but you can remain calm – it is not dangerous to humans."Mizrahi observed the jellyfish at two sites off the coast of Israel, in the Haifa Bay and near Beit Yannay, about 50 kilometers south, at relatively shallow depths of about 10 meters. This type of jellyfish is able to take advantage of very shallow up to very deep waters of up to 1,500 meters, according to Mizrahi. Because the jellyfish is so small and is composed 98 percent of water, it can also be nearly impossible to notice, he explained. The Aequorea macrodactyla belongs to the Hydrozoa class within the Cnidaria phylum – the phylum containing jellyfish, corals and sea anemones, among other organisms. "This jellyfish belongs to a class of species that are able to stay young forever," Mizrahi said. "In this class, there are jellyfish that are capable of renewing their youth, so that after they reach adulthood and create offspring, they can return to their embryonic state."While it is technically possible that the Aequorea macrodactyla could have lived in the depths of the Mediterranean for years and only now is rising to shallower waters, Mizrahi said that the more likely explanation for the organism's arrival is conveyance through ballast water. "Beyond the results of genetic analysis and morphology, the fact is that there is no jellyfish like this in the tremendous distance between Japan and Israel," Mizrahi continued. "In other words, the jellyfish arrived here thanks to the external intervention of humans, not naturally."Already in his research on the jellyfish, Mizrahi said he has found that its presence in the Eastern Mediterranean could impact the environment, as the organism brings added competition in the food supply chain – though he described this competition as "probably not significant." Mizrahi will be publishing an article on the subject in the July 2015 issue of the NeoBiota journal, in cooperation with Dr. Eli Shemesh. A relative of the Aequorea macrodactyla  – Aequorea victoria – attracted much attention globally in 2008, when Japanese and American researchers won a Nobel Prize in chemistry for their shared discovery of the Green Fluorescent Protein, the University of Haifa pointed out. This protein, which emits green, glowing light under ultraviolet radiation, is widely used in research laboratories to examine bodily processes in living organisms, such as detecting nerve cell damage from Alzheimer's disease, the university explained.No matter how the Aequorea macrodactyla jellyfish made its way to Israel, Mizrahi warned that its survival and even prosperity is indicative of the dramatic changes occurring in the Mediterranean's environment. "The changes are mostly due to man's interference with nature – overfishing can lead to the dwindling of natural enemies of jellyfish and its presence here can testify to the changes at a more global level, such as the warming of the sea," he said. "The concern is that changes in the marine environment will enable jellyfish that are dangerous to humans to immigrate to this area, and then, the damage would be dramatic."