MDA called on members of the public to check on elderly neighbors and relatives who live alone and help them find shelter from the cold weather if needed. 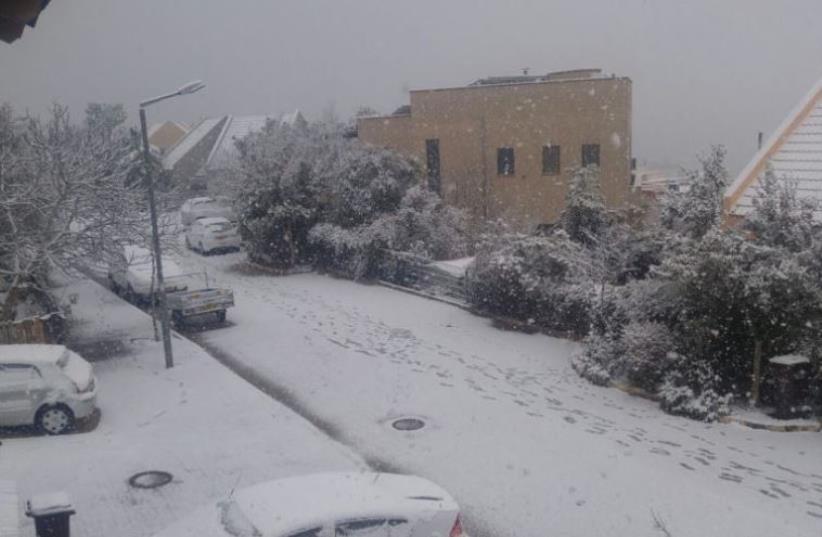 Snow in the northern Misgav Regional Council's Mount Halutz area
(photo credit: Courtesy)
Advertisement
The storms may have subsided but freezing temperatures took their place on Thursday, causing one person to die of hypothermia and leaving homes around the country without water after their pipes burst.In the morning, a homeless man, who originally came to Israel from the former Soviet Union, was found lifeless on a Bat Yam sidewalk by police. He had suffered from hypothermia due to the cold weather. Dr. Yuval Levy, deputy director of the hospital, said the man was divorced  and not in contact with his ex-wife who, lives in Israel, nor with relatives living in Russia and Greece. “He will get an honorable burial, but apparently with almost no family or friends attending,” said Levy.The night before, Magen David Adom was called to the home of an 85-year-old man, who was found  unconscious on the floor of his home, also suffering from hypothermia. He survived, but was last reported as being in serious, but stable, condition.MDA called on members of the public to check on elderly neighbors and relatives who live alone and help them find shelter from the cold weather if needed.In cities such as Jerusalem and Safed, residents reported cut-off water supplies and flooding in their homes from burst or leaking pipes, following the overnight winter chill,Numerous Katamon and German Colony residents took to Facebook’s Secret Jerusalem page, a site dedicated to the capital’s Anglo community, to get advice and to air their grievances.“Is anybody else without water in the German Colony/Katamon area?” wrote one user. “I’m worried our pipes may have frozen and burst. But wanted to see if it maybe was something that was an issue with the city system affecting other people.”The posting promptly received 19 responses.A spokesperson from the water company said that the unusually cold weather resulted in burst or leaking pipes throughout the capital, adding that residents should allow the cold water to drip, which prevents pipes from freezing.While the official did not know how many pipes were estimated to have burst or leaked, he said “it has been a busy day.”Temperatures were particularly frigid in the Golan Heights and the Galilee on Thursday. The l for Merom Golan was -9.1° Celsius, with the maximum rising only to 5.1° by Thursday evening, according to data provided by Dr. Amos Porat, head of the Climate Department at the Israel Meteorological Service. In Safed, the minimum was -3.1°.In Jerusalem, the 24-hour minimum sunk to -0.5°, while Negev temperatures also reached below zero, falling to -0.3° in Beersheba and -1.2° in Sde Boker.The IMS the sub-zero situation is expected to continue overnight with temperatures on Mount Hermon to dip  to – 10 degrees. The IMS said that temperatures could potentially warm over the weekend, with light showers expected in coastal areas.