Valls attends inauguration during his 3-day trip to Israel, calling the site another "chapter of cooperation between our two countries" and a sign of future work. 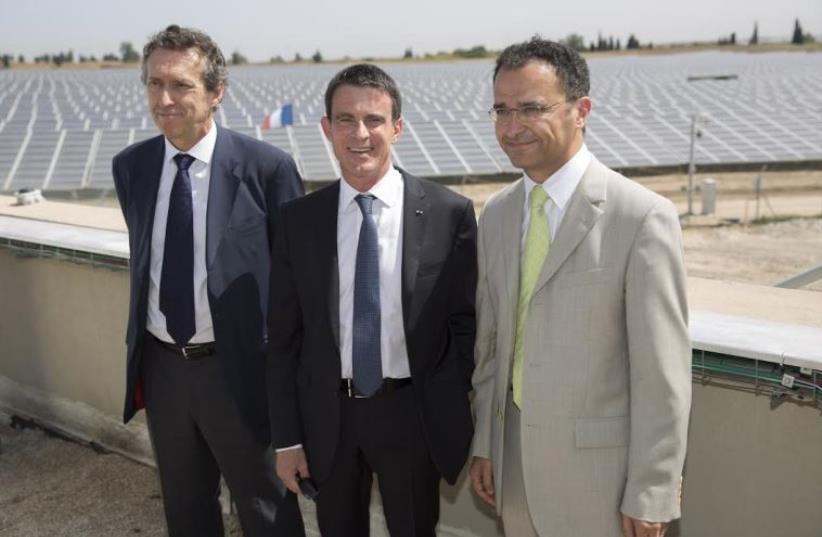 From Left: Antoine Cahuzac, CEO of EDF-EN, French PM Manuel Valls and CEO of EDF-EN Israel Ayaon Vaniche
(photo credit: Courtesy)
Advertisement
Israel came one step closer to a clean-energy future on Sunday, when the country inaugurated a 50-megawatt solar in the northern Negev, through a partnership with a subsidiary of France’s national electric company.The Zmorot Solar Park was built as a joint project of the Israeli partner Solex and EDF Energies Nouvelles Israel Ltd., with the support of a subsidiary of the Électricité de France’s renewable energy arm.French Prime Minister Manuel Valls attended the inauguration during his three-day trip to Israel, calling the site another “chapter of cooperation between our two countries” and a sign of future work. He hailed the Zmorot field as more than just a technical project. “It is a political project, a project that shows us a way for the future of renewable energy.”Planning for the 207,000-panel solar park began in 2010 and it took another three years for construction approval to be received. Once that happened, the Zmorot field was finished in 18 months.Earlier this year, it received approval to connect to the national electricity grid, where it will sell electricity to the Israel Electric Corporation for the next 20 years.CEO of EDF Energies Nouvelles Antoine Cahuzac told The Jerusalem Post that the Zmorot solar field is set apart by being the largest the company has built in Israel and because of its relatively fast development.“This one set a benchmark in terms of efficiency and speed of construction,” he said.Ayalon Vaniche, CEO of EDF Energies Nouvelles Israel, noted that the speed came from experience in building the company’s 10 other solar fields in Israel, which produce a combined 160 MW.“Our first project was 8 MW. It took us eight months to build it,” Vaniche said of the company’s first Israeli solar field. “Here [in Zmorot], on some days we built 2 MW [worth of solar panels] per day.”Speaking at the inauguration ceremony, Environmental Protection Minister Avi Gabbay said there has been a dramatic change regarding environmental issues in Israel in the past few months. Since the landmark UN Climate Change Conference held in Paris last December, known as COP 21, Gabbay said Israel has managed to reduce its use of coal by 19 percent.His ministry, along with the National Infrastructure, Energy and Water Resources Ministry, backs a goal for 17% of Israel’s power to come from renewable resources by 2030. That number now stands at 2.6%.Bureaucracy issues, Gabbay said, are “keeping us at 2.6%.” “I know that EDF has suffered from that a lot,” he said. “I know that we are going to change it because today everybody wants renewable energy.”Regarding bureaucracy, Cahuzac said all countries have some problems with it and that it is not an issue for EDF. Vaniche even said Israel’s solar regulations are more “clever” than other countries.Cahuzac said the company intends to build more solar fields in Israel, although nothing is under construction at the moment. Vaniche noted that a few are in the development stage and are awaiting approval from the Energy Ministry.“We have the building permits ready. We have everything ready. We just need the green light from the [Energy Ministry],” he said. “We will keep on being a key player in the sector of renewable energy in Israel.”EDF is also looking into ways to better store renewable energy in order to provide a stable flow of electricity to consumers at night and on cloudy days, Cahuzac said.Vaniche said a pilot project is under way in France with EDF, French energy corporation Areva and Israeli battery start-up EnStorage. A similar, larger-scale pilot in Israel is also in the works, he said, and has recently received approval from the Economy Ministry’s Chief Scientist’s Office.Aside from solar energy, EDF is also conducting a hydro-power project on Mount Gilboa in the North, which Vaniche noted could produce 300 MW, six times that of the entire Zmorot field.