A variety of Israeli, German and Jordanian ornithology and climate experts will meet for the 2nd German-Israeli Climate Talks

By SHARON UDASIN
AUGUST 27, 2015 20:48
Yellow Wagtail bird
(photo credit: ITSIK MAROM)
Advertisement
As climate change continues to influence bird migration behaviors, a team of Israeli and German researchers aims to find ways of coping with these ever-evolving patterns.“The climate is a key factor in migration,” veteran ornithologist Prof. Yossi Leshem told The Jerusalem Post on Wednesday. “Some of the birds are coming back much earlier to Europe, and then if they come back earlier, they sometimes have no food.”Leshem, a professor at Tel Aviv University’s zoology department and the founder of the Society for the Protection of Nature in Israel (SPNI)’s Israel Ornithology Center, is hosting next week’s “2nd German-Israeli Climate Talks,” which will focus on the impacts of climate change on bird migration and on the Dead Sea region. Organized by Tel Aviv University in collaboration with the German Foreign Affairs Ministry and a number of other partners, the convention will feature a variety of Israeli, German and Jordanian ornithology and climate experts.At the talks, which follow a similar December event, the experts will both share their knowledge in a series of lectures as well as visit hot spots in the Dead Sea region.Following the convention, the hope is to launch a comprehensive study on the impacts of climate change on bird migration, with the participation of Israeli, German, Jordanian and Palestinian parties, according to Leshem. 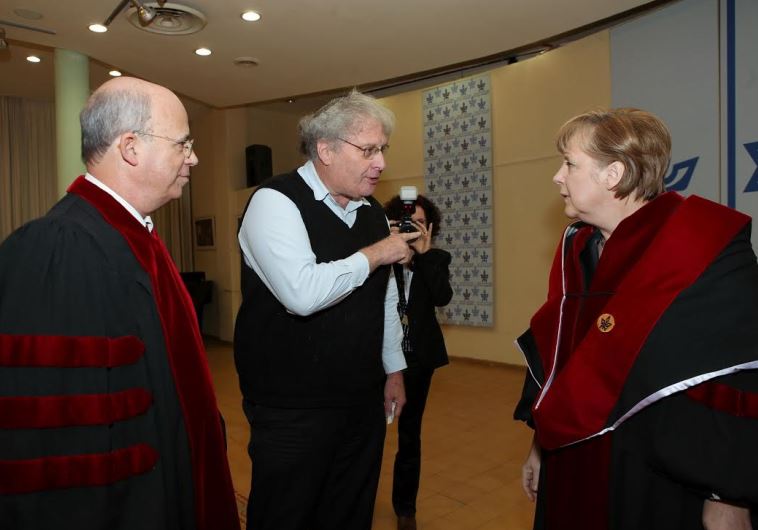 Prof. Yossi Leshem with Angela Merkel in 2011 (photo credit: Yossi Leshem).The partners in such a study are likely to include the German federal government, Tel Aviv University, SPNI, Israel’s Science, Technology and Space Ministry and Regional Cooperation Ministry, the Amman Center for Peace and Development, and the Palestine Wildlife Society, he said.“Germany will play a key role in helping us,” Leshem said. “Germany is very interested in it because most German birds are migrating over Israel, the bottleneck of the Middle East. Most of the storks, mainly from eastern Germany, migrate over Israel.”Leshem has a long history of working with the German government on the region’s bird issues, stemming back to Chancellor Angela Merkel’s time roughly 20 years ago as environment minister. At the time, Merkel provided the funds necessary to attach transmitters to storks in Israel, as well as those for the development of the Israeli ornithology website birds.org.il, he said.Leshem noted that he and his colleagues have noticed significant changes in migration patterns of certain bird populations. About 110,000 lesser-spotted eagles, which he has been studying since 1980, typically visit Israel between about September 25 and October 1-2, he explained. Recently, however, they have been arriving a week later.Pelicans, on the other hand, are now arriving early, Leshem said. When he originally began studying the birds in the 1970s, about 50,000 would visit between October and November – an arrival date that has now become as early as September.One of the main problems with the change in patterns is that the pelicans have no natural food sources when they arrive, causing them to head to fish farms, he explained.As a result, he and partners at the Israel Nature and Parks Authority have launched an effort to provide them with the food they need earlier on.“The idea is to get them the food and then they go to Africa,” Leshem said. “If suddenly they are coming one month earlier, you have to get the fish ready and feed them.”“With this monitoring study, we will be able to see what’s going on,” he added.