Ministry officials gathered in the northern coastal city to present the first quarterly report of the National Action Plan for the Haifa Bay Area. 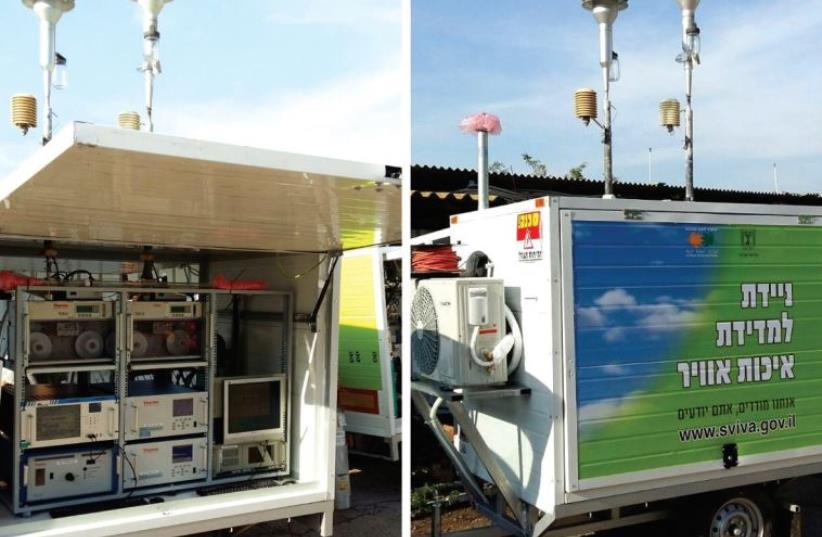 A MOBILE air-quality testing trailer is deployed by the Environmental Protection Ministry. Its motto, printed on the side, is ‘We measure, so you know’
(photo credit: RONI MAIMON)
Advertisement
The Haifa Bay region has experienced an 11-percent drop in air pollution levels resulting from the industrial sector over the past year, the Environmental Protection Ministry announced on Tuesday.Ministry officials gathered in the northern coastal city to present the first quarterly report of the National Action Plan for the Haifa Bay Area – a comprehensive program approved by the government in September.The five-year plan, which received a budget of NIS 330 million, aims to improve the region’s air quality, mitigate environmental risks, promote research, increase accessibility to data and bolster supervision, enforcement and monitoring.“Today is an historical day,” said Haifa Mayor Yona Yahav.“For the first time in the history of Israel, a government representative has assumed not only the authority, but also the responsibility, of the state to correct the distortions and even the crimes committed in the Haifa Bay.”Among the achievements documented in the industrial sector thus far has been the 11% reduction in volatile organic compound emissions from 2014 to 2015, or a 65% drop since 2009. Meanwhile, 77% of the largest Haifa Bay factories are now required to comply with much stricter emissions reductions obligations, the ministry report said.Four plants in the bay area have invested tens of millions of shekels in installing equipment to curb emissions, and 58 of 75 air quality monitoring devices are sending in updated data from factory chimneys – all made available online to the public, according to the report.Government supervision over such facilities have also increased in the fourth quarter of 2015, with spot checks occurring at 27 sites and fullfledged inspections at 17, the ministry report said. Enforcement proceedings for violations have begun at 11 different factories, the ministry added.In the transportation arena, just two days ago, heavy trucks were banned from operating during Haifa’s downtown area during rush hour, as a first step toward creating the country’s first official Low Emission Zone (LEZ). As of the beginning of the new year, lighter trucks – those up to 12 tons – began receiving discounts to divert their routes through the Carmel Tunnels rather than via the city’s center.Two public transportation fleets have received orders to reduce emissions levels, while 177 polluting vehicles have been removed from the streets during roadside spot checks, the ministry report said. In addition, about 90% of fueling stations in the Haifa Bay region have installed vapor-reducing systems, according to the report.As far as air pollution measurements are concerned, two new mobile air quality monitoring stations are now operating in the region, on top of the 25 that were already working there, the ministry said. Locations of bi-weekly air quality sampling points, meanwhile, have been doubled from four to eight.In the hazardous materials sector, the final stage recently began in the tendering processing for establishing an ammonia factory in an unpopulated area of the South, which will enable the removal of the existing storage container in Haifa Bay, the report said.A final achievement presented in the report was related to the ongoing rehabilitation of the Kishon River, describing how some 80,000 cubic meters of contaminated sludge has already been removed for treatment from the bottom of the basin.“Five months since the launch of the program and we already have results on the ground,” said Environmental Protection Minister Avi Gabbay.“We still have quite a lot of work to do – we will continue to work diligently to reduce air pollution in and around Haifa Bay, from both industry and transportation. We will increase supervision and enforcement. We’ll increase monitoring and sampling of air quality, and we will ensure that the quality of life for residents of and near Haifa will improve dramatically.”Mayor Yahav emphasized how issues of environment and health are of primary importance to the city, and pledged his commitment toward doing everything in his power to stop the expansion of the area’s oil refineries and the production and storage of petroleum, volatile materials and other potentially dangerous substances.The mayor in large part credited Gabbay for working alongside him to ensure that Haifa is “no longer be the backyard of the State of Israel and will no longer be the basket in which we throw polluting industries.”In response to the report, the executive director of Adam Teva V’Din (Israel Union for Environmental Defense), Amit Bracha, praised the Environmental Protection Ministry for the important steps taken thus far to fight air pollution and associated morbidity, but also voiced words of caution.“However, we must keep in mind that in addition to these important steps, there are – under the protection of the law – plans to expand polluting industrial activities of Israel Oil Refineries in the bay,” Bracha said. “The Environment Ministry must express strong opposition to this plan.”