Preliminary results from the company's Ness-3 at which initial analyses indicate the presence of hydrocarbons in the vertical drilling sections. 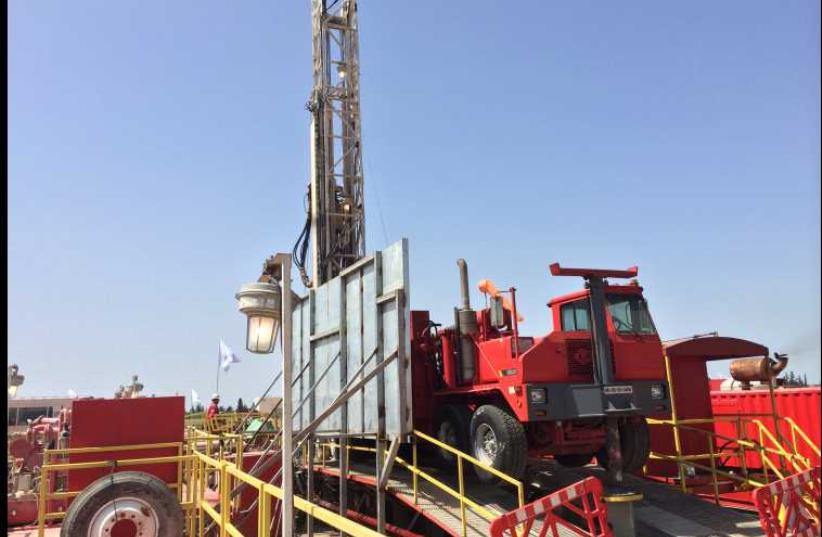 Golan oil rig
(photo credit: SHARON UDASIN)
Advertisement
The Afek Oil and Gas company has identified the presence of hydrocarbons at a second drilling site in its Golan Heights exploration project, parent firm Genie Energy Ltd. announced on Tuesday.Preliminary results from the company’s Ness-3 well are consistent with the previous findings at its Ness-5 project. Those initial analyses indicated the presence of hydrocarbons in the vertical drilling sections, according to a report from the New Jersey-based company.It stressed, however, that the volume of resources and how well they can be extracted remain to be determined, adding that the resources do not constitute proven or even possible reserves at this point.“The results are encouraging,” Afek Oil chief geologist Dr. Yuval Bartov said on Wednesday. “We are now continuing further analysis of the logging results from the two wells, and we are preparing to carry out trial production and the continued execution of the drilling program, in accordance with the program approved by the planning institutes – at the end of which we will publish the results and whether we have in our hands an Israeli commercial oil reservoir.”Drilling at the approximately 0.6-hectare (1.5- acre) Ness-3 site, located near the Bnei Yehuda industrial area, began on June 10. The site is the second of up to 10 such sites on the southern Golan Heights for which Afek has a license to explore for conventional oil over the next three years.The 0.7-hectare (1.7-acre) Ness-5 site is located about 5 km. south of Ness-3, just northwest of the Avnei Eitan and Nov moshavim and south of Kibbutz Natur and the town of Katzrin.Work at Ness-5 began in mid-February, and Genie announced the presence of hydrocarbons at this site on May 5.Afek has nearly concluded analyzing the cores removed from Ness-5 and other information garnered from that well, and is continuing its analysis of both the cores and logging data obtained at Ness-3, according to Genie.At the next site, the Ness- 6 plot located southeast of Gamla, drilling is slated to begin in mid-August, Bartov said. He estimated that the work there would take approximately one month.The Afek Oil project first received its exploratory drilling license for a 39,500-hectare (97,600- acre) zone south of Katzrin in April 2013, followed by the approval of the Northern District Committee for Planning and Building in July 2014.In the six months that followed, however, the company faced delays due to environmental opposition.Protests outside the site led by Greenpeace, the Society for the Protection of Nature in Israel and others, set the project back. In addition, a High Court of Justice petition filed in September by Adam Teva V’Din (Israel Union for Environmental Defense) temporarily paused the work. The High Court dismissed the petition in December, however.Following the court decision, Afek was able to proceed with the drilling in February of this year.“We remain optimistic about the results to date,” Howard Jonas, chairman and CEO of Genie, said on Tuesday. “After many years of work on this project, we are now gathering the data to determine if there is a significant extractable resource. We stand behind our world-leading scientific team and are pleased that the preliminary results are consistent with their theories.”