BirdLife: Millions of birds killed around Mediterranean each year. 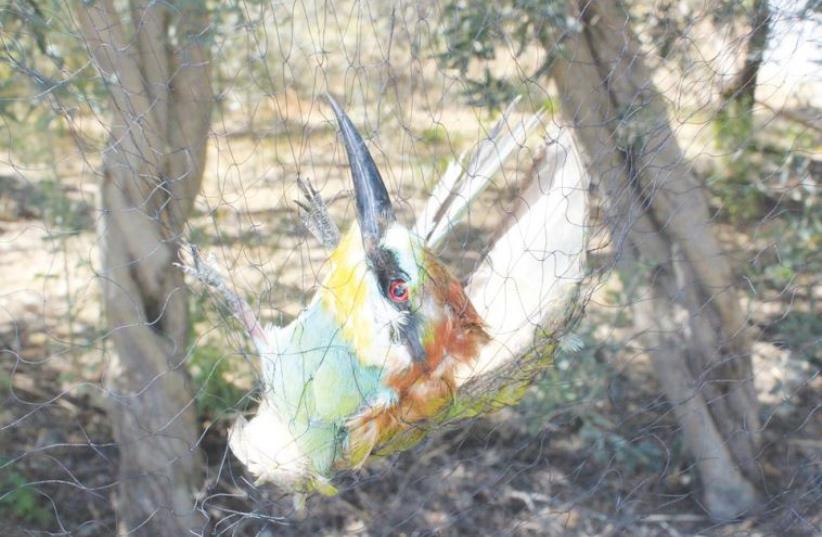 A bird falls foul to a trap in Egypt. Some 5.7 million birds experienced a similar fate there last year, according to BirdLife International
(photo credit: NATURE CONSERVATION EGYPT)
Advertisement
Israel – and the small British territory of Gibraltar – are the only areas in the Mediterranean region where negligible numbers of birds are illegally killed, a report to be released on Friday says.Tens of millions of birds are killed across the Mediterranean each year, while a number of species face destruction and many are subject to cruel methods of killing such as shooting, nets, glue traps and luring sounds that mimic other birds.The report was conducted by BirdLife International, a UK-based global partnership of conservation organizations, along with local conservation partners including the Society for the Protection of Nature in Israel. Its findings were to be published on Friday ahead of the Birdfair 2015 event that is taking place at the Rutland Water Nature Reserve in England this weekend.BirdLife is the world’s largest nature conservation collective and has 120 partners worldwide.Although many of the countries at the top of the list are Middle Eastern and North African nations plagued by conflict, some European countries also feature high in the rankings.“The report distinguishes Israel favorably, as one of the few countries where the number of birds hunted illegally is very small, and indeed almost nonexistent,” SPNI said in a statement.A team of SPNI representatives is in England this weekend to participate in the Birdfair convention. While illegal hunting of birds in Israel has not quite disappeared, the numbers are trivial in comparison to those of other countries in the BirdLife report, according to SPNI.Of the 26 countries and territories surveyed, Egypt has the worst record. An average of 5.7 million birds per year were illegally killed or taken there in 2014-2015.Trailing closely behind Egypt was Italy, with 5.6 million birds captured or killed annually, followed by Syria, with 3.9 million. Lebanon had 2.6 million illegal killings or captures per year and Cyprus had 2.3 million.Greece has the sixth worst record, with 704,000; then France, with 522,000; Croatia, with 510,000; Libya, with 503,000; and Albania, with 265,000.Famagusta, a northern Cypriot port city under Turkish control, was the city with the worst bird-killing record, according to the document.Malta placed 15th on the list, with an annual mean estimated number birds illegally killed or taken of 108,000.The Palestinian Authority placed 16th, with a mean of 89,700 birds targeted per year, while Jordan placed 23rd, with 17,300.Eurasian chaffinch topped the “kill list,” with an estimated 2.9 million killed each year. About 1.8 Eurasian blackcaps, 1.6m.common quails and 1.2m. song thrushes are killed annually.A number of species hunted, such as the Eurasian curlew, are listed as vulnerable species on the International Union for Conservation of Nature’s Red List, the review said.Upon reading the report, the SPNI described the numbers of birds killed and taken illegally around the Mediterranean as “frightening.”“There are a variety of hunting methods revealed in the report: shooting, nets (in Egypt, the majority of birds are caught in nets), glue traps (a method widely accepted in Europe),” the SPNI said. “The most hunted birds, surprisingly, are rather small songbirds.”Israeli ornithologists and conservation activists joined the global effort to combat illegal bird hunting in 2014. That year, the Israeli organization initiated the annual Champions of the Flyway competition, in which bird enthusiasts work in teams to identify species for 24 hours in the country’s South. Thus far, Champions of the Flyway has raised $115,000 for campaigns against poaching in Georgia, Malta and Cyprus, the SPNI said.“At the end of March 2016, SPNI will hold its third Champions of the Flyway, and the funds raised this time will go to campaigns on the subject in Greece,” the organization said.Profiling some of the top offenders in greater detail, the review found that “indiscriminate hunting has become commonplace in Egypt.” The authors attribute this in part to the fact that the country’s legal framework regarding trapping and its rules on permissible hunting are complicated and not entirely understood by trappers and hunters. Illegally caught birds are often served in markets and restaurants there, the report adds.The writers pointed out that the organization Nature Conservation Egypt, the Egyptian government, and the African-Eurasian Waterbird Agreement have decided on a new action plan to tackle such killing in the country and raise awareness about the issue.In the European Union’s worst Mediterranean offender, Italy, the report describes how 43 percent of the country’s 348 bird species are regularly being killed in significant numbers. Despite existing laws on the subject, Italy “has a long history of hunting and illegal killing for food,” and such activities are widespread throughout the country, according to the review.“This review shows the gruesome extent to which birds are being killed illegally in the Mediterranean,” Patricia Zurita, CEO of BirdLife International, said. “Populations of some species that were once abundant in Europe are declining, with a number even in free-fall and disappearing altogether.“Our birds deserve safer flyways,” Zurita said. “We want conservation efforts to be increased now, before it’s too late.”