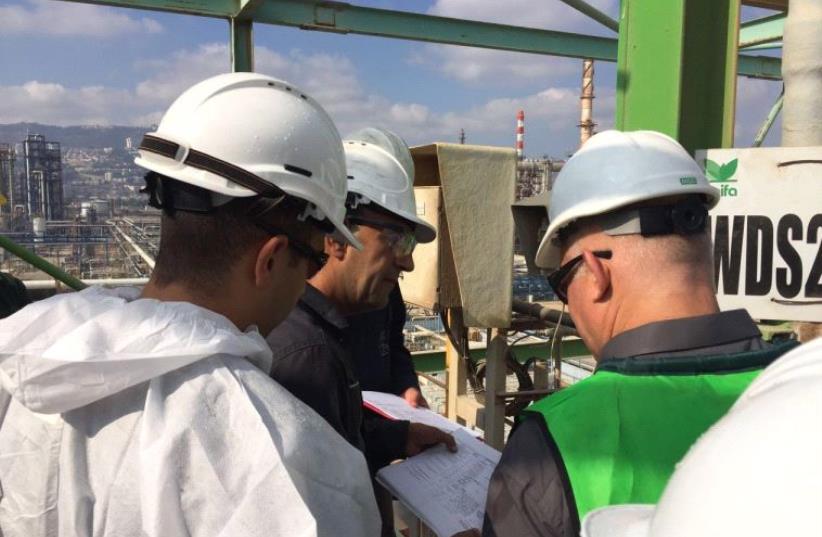 Environmental Protection Ministry director-general Yisrael Danzinger during the checks
(photo credit: HAIM ELBAZ/ENVIRONMENTAL PROTECTION MINISTRY)
Advertisement
During spot checks of 27 chimneys at five Haifa factories, inspectors uncovered deficiencies at every site, the Environmental Protection Ministry announced on Sunday.The operation, led by ministry director-general Yisrael Dancziger and deputy minister Yaron Mazuz last Thursday, aimed to determine the environmental soundness of Haifa Bay-area chimneys, evaluating compliance with emissions permits and business licenses.Members of the ministry’s Green Police and Haifa district bureau checked the chimneys at Haifa Chemicals, Carmel Olefins, Gadiv, Gadot Chemical Terminals and S.H. Alhalad Coating.A preliminary analysis revealed numerous flaws in most of the chimneys examined, and all five plants were found to be in violation of either their emissions permits or conditions established in their business licenses, according to the ministry.Officials said they would be launching enforcement proceedings against the factories, including monetary sanctions and immediate repairs of the defects uncovered.“I take very seriously the irregularities discovered at the factories,” said Environmental Protection Minister Ze’ev Elkin. “That is why I have instructed the deputy minister and the ministry director-general to place an emphasis on field visits, including unannounced visits, particularly in Haifa Bay, so that factory owners will understand that it doesn’t pay to not meet the requirements determined by the law.”The five factories and chimneys selected came from a much larger list of more than 200 chimneys in the Haifa Bay region – chosen due to a suspicion of noncompliance with sampling procedures, the ministry explained.“From the moment I took office, I made clear that we will have no patience for polluters, and therefore we will make use of the law against violators who continue to endanger the residents of Haifa,” Elkin said.Dancziger likewise stressed that “any violation will be prosecuted immediately, in the most serious manner.”The increased number of chimney checks that began to take place in 2015 arose from an overall strengthening of monitoring activities in the Haifa Bay region – efforts that Dancziger said would continue all over the country.