Gabbay: ‘We must reduce emissions and ensure long-term energy stability.’ 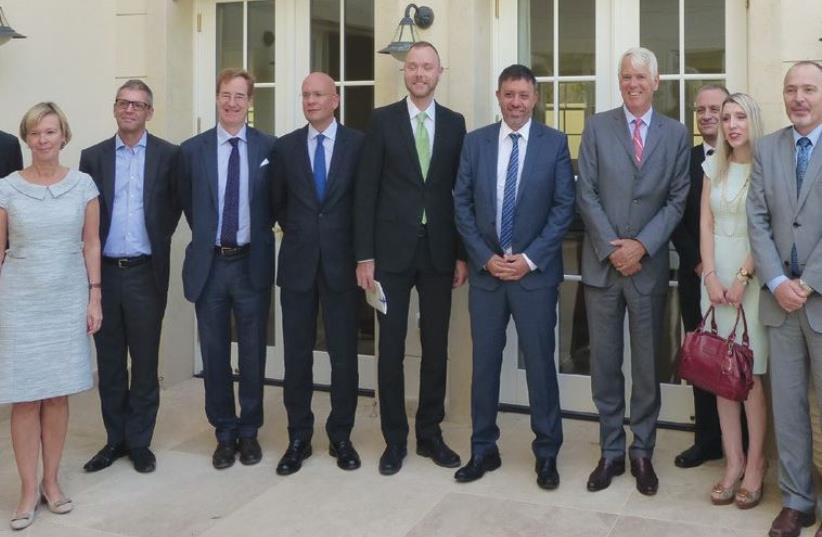 Environmental Protection Minister Avi Gabbay (center) meets with EU Ambassador to Israel Lars Faaborg-Andersen and other ambassadors of EU countries in Herzliya yesterday to address climate change
(photo credit: Courtesy)
Advertisement
As December’s United Nations Conference on Climate Change approaches, Environmental Protection Ministry officials and European Union ambassadors committed on Tuesday to strengthen cooperation on this critical global issue.“We must do something extreme about climate change,” said Environmental Protection Minister Avi Gabbay.“Israel was not really part of this effort 10 years ago; the EU is a pioneer in these issues, and we are glad to be working with you on these issues now.”Gabbay was addressing his European colleagues at the Herzliya home of EU ambassador to Israel Lars Faaborg-Andersen, where a number of diplomats and ministry officials gathered to discuss Israel’s preparations for the upcoming Paris climate conference, also known as the Conference of Parties (COP- 21). As Israel presses forward with its own plans to combat climate change, the minister described the EU as a key partner in this journey.“The climate issue in Israel is now high on the agenda – it’s an issue that everyone speaks about,” Gabay said. “We are confident that we are going to make a change together.”Faaborg-Andersen expressed similar sentiments, stressing that “close partners like the EU and Israel” must “continue to cooperate closely to ensure that high-level expressions of wills are transformed into actual commitments at the negotiations table.”In mid-September, ahead of COP-21, the Israeli government approved environmental targets to be met by 2030, among other relevant goals, in order to submit its mandatory Intended National Determined Contribution (INDC) plan to the United Nations Framework Convention on Climate Change (UNFCCC).Israel’s targets involve reducing greenhouse gas emissions by 25 percent by 2030, limiting Israelis to 7.7 tons of carbon dioxide per capita, involving an initial budget of NIS 300 million for four years. In addition to setting goals for curbing greenhouse gas emissions, the government’s plan involves making renewable energy resources responsible for 17% of the country’s electricity mix by 2030, as well as reducing overall electricity consumption by the same percentage. The targets also include a 20% decrease in private vehicle usage.Participant nations in COP- 21 are aiming to achieve a legally binding and universal agreement to ensure that global warming does not surpass 2°C. The summit will be the 21st such annual conference to occur as a result of the Rio Earth Summit in 1992, during which countries adopted the UNFCCC. Prior to COP-21, all participant nations are expected to submit their INDC plans, the terms of which can vary according to their individual national conditions.Reviewing the progress that has been made so far leading up to the COP-21 event in his home country, French ambassador Patrick Maisonnave said that thus far, 154 countries – collectively responsible for some 87% of global greenhouse gases – had submitted their INDCs.“Beyond those figures, it’s clear that something has happened, in the sense that the contributions submitted clearly show that there are major changes,” the ambassador said. “Many countries have adopted and launched a sustainable transition toward low-carbon development models. This is already a positive outcome of the Paris conference.”Nonetheless, Maisonnave acknowledged that the INDC emissions reduction plans submitted at this time will only likely help curb temperature increases to 4-6°, rather than the hoped-for 2° maximum.Striving to “see the bottle half full,” the ambassador said he felt that the 2° global warming cap is still “within reach, if efforts are made to increase the dynamics of the first round of contributions.”“There is something absolutely crucial in the Paris negotiations,” Maisonnave added. “It is how to set a framework to review each country’s commitment.” Both Maisonnave and Faaborg-Andersen emphasized the need to continuously monitor that countries are following COP- 21, to ensure that they remain on the right track.Looking at Israel’s record in particular, Dr. Gil Proctor, of the Environment Ministry’s air quality and climate change division, described the inter-ministerial work now taking place to devise a national action plan, following the government approval of emissions reduction targets.Some of the primary goals in implementing and realizing these targets will involve leveraging private funding for energy efficiency investments, tackling barriers that have stalled renewable energy installment and developing the public transportation sector, Proctor explained. Also critical will be achieving higher efficiency through green taxation of private cars, as well as decarbonizing the national electricity grid – by shifting the country’s heavy dependency on coal toward natural gas and renewables, he added.Particularly because Israel is, in terms of its infrastructure, an island nation, the country must both reduce emissions and “ensure long-term energy stability, which is paramount to our continuous economic development,” Proctor said.Gabbay likewise stressed the importance of moving forward with efforts to combat change due to the fiscal benefits of achieving a cleaner environment.“It’s an issue that will improve our economy, and we believe that we must be a country that contributes,” the minister said.