The Red Sea dive will be the first in a series of such protests around the world. 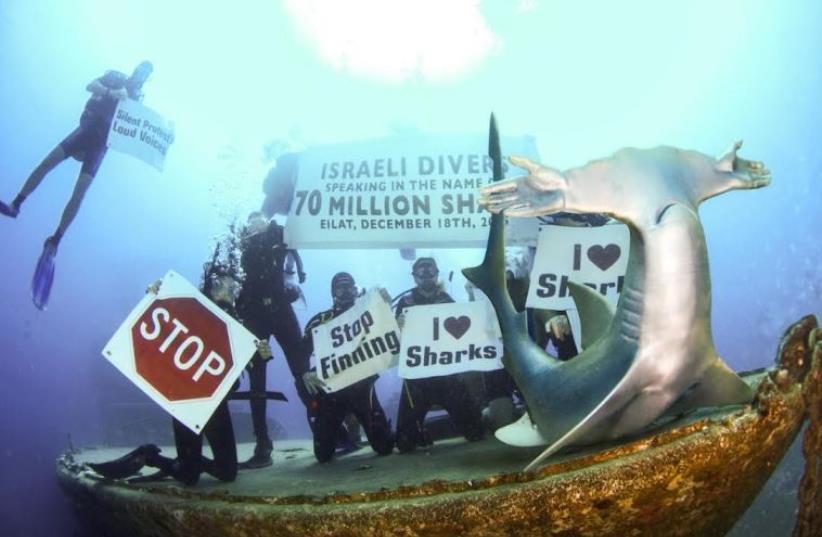 Anti-shark hunting demonstration.
(photo credit: BOAZ SAMORAI)
Advertisement
About 100 Israeli and international divers will plunge into the Red Sea on Friday as part of a mass underwater demonstration to save sharks around the globe.The Red Sea dive will be the first in a series of international protests that aim to raise awareness about the global disappearance of sharks.The underwater demonstration campaign – called “Silence of the Sharks” – is being led by underwater photographer and diver David Pilosof, who has partnered with the Eilat municipality and the Tourism and Culture and Sport Ministries for the event.“I have a grandson, and I really want that when he becomes older and a diver, he will be able to see a shark swimming in the ocean and not just watch him on television,” Pilosof told The Jerusalem Post on Tuesday.Pilosof’s grandson is twoand- a-half years old.Since 1972, the number of blacktip reef sharks around the world has dwindled 93 percent, while the number of tiger sharks has decreased by 97% and bull sharks by 99%, Pilosof said. Every year, some 70 million sharks are hunted globally, particularly in the Far East, he added.That being said, even the European Union allows for the personal import of 20 kg.of shark fins, and the United States has also failed to make shark fishing illegal, Pilosof continued. In Israel, however, shark fishing is prohibited.Ahead of Friday morning’s Eilat dive, Pilosof said he and a few fellow divers did a practice run two weeks ago, during which they took photographs with a plastic shark for campaign posters for the event.The logo for the campaign was designed by illustrator Shlomo Cohen, while the shark model was 3D-printed by Israeli startup Massivit.Among the 100 people registered for the event are divers from Israel, Germany, Great Britain, France and Monaco, Pilosof said. They will dive to a 20-meter depth and spend about 30 minutes underwater, taking photographs with the two-meter shark model, he explained.Participation in the dive costs NIS 90, and those interested can register at idive.co.il.It is Pilosof’s hope that Friday will be just the beginning of a series of similar events around the globe, culminating in a final dive in Cyprus on October 23, 2016.Another dive is already scheduled in South Africa for June 4, and Pilosof said he is in talks with other activists in Germany, France and Italy about arranging dives in their countries.Acknowledging that there are already some 400 shark conservation NGOs around the world, many of which have been operating for years, Pilosof said he is confident he can bring something new to the table as a diver-photographer- activist.“We are going to do an underwater protest, which photographs quite nicely,” he said. “We believe we will bring some awareness to this situation.”