Exhibition and conference organized in Tel Aviv for the third year in a row by the Fuel Choices Initiative in the Prime Minister's Office. 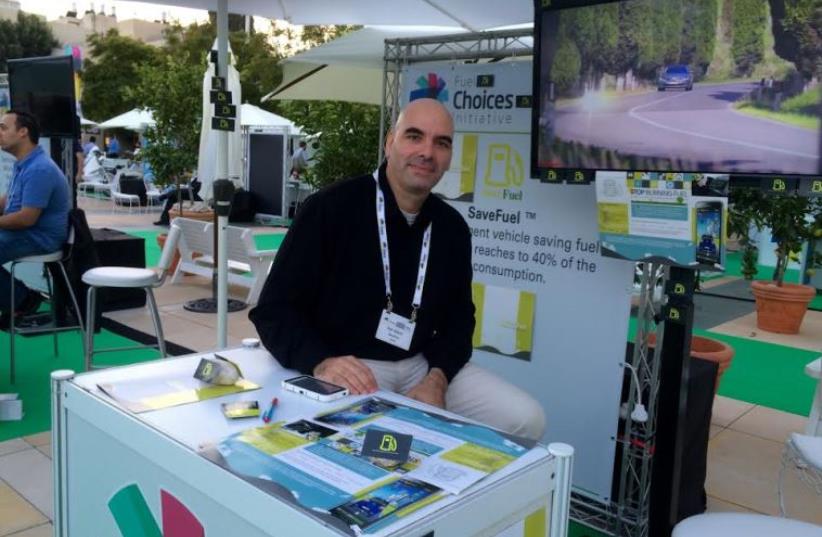 Ron Adoni, CEO of SaveFuel
(photo credit: SHARON UDASIN)
Advertisement
As the transportation sector awaits the mass integration of electric vehicles and other innovative technologies, one start-up is focusing on conserving gasoline – and money – in the cars that still dominate the world’s roads.Israeli company SaveFuel has developed a mechanism capable of strategically choosing when to shift an automatic vehicle’s gears from “drive” to “neutral,” doing so without the involvement of the driver, the firm’s CEO, Ran Adoni, told The Jerusalem Post on Tuesday.Aiming to both foster a cleaner environment and conserve fuel, the mechanism can recognize situations in which the car or truck can optimally perform in idle mode, Adoni explained.“We haven’t created a new engine and a new technology, but we are using existing technology to combine the mechanisms that allow us to maximize the potential of driving and speed,” he said.Adoni was speaking at his company’s booth at the November 10-11 Fuel Choices Summit, an exhibition and conference organized in Tel Aviv for the third year in a row by the Fuel Choices Initiative in the Prime Minister’s Office.While a number of the world’s leading scientists and government officials in the alternative transportation sector presented their work inside the Habimah Theater, rows of Israeli start-ups set up shop in the courtyard outside.As far as SaveFuel is concerned, the driver can simply press a button to launch the system, with the option to deactivate its functions at any time, Adoni explained.“If you touch the gas or break, the system releases and returns the responsibility to be driver,” he said. “It’s like a cruise control but exactly the opposite.”Accompanying the physical mechanism integrated within the car’s engine is a smartphone application – also accessible from built-in screens in luxury cars – from which the driver can access a variety of functions.In addition to maximizing the use of the neutral gear, SaveFuel’s system works with the existing sensors and indicators within a vehicle – such as air conditioning, heat and tire pressure – to advise the driver on other ways he or she can conserve gas best, Adoni said. For example, the app might advise the driver to raise the car’s temperature or fill the tires with more air in order to save a specific amount of fuel, he explained.SaveFuel is in the advanced stages of acquiring approvals from relevant government bodies to make the system commercially available within about six months, Adoni said. The company has run tests using one private car and two trucks from a major Israeli trucking and bus firm, he added. Adoni’s hope is that the system – expected to cost $400- $500 – will catch on in Israel and then eventually abroad.Focusing on an entirely different way of conserving fuel, another start-up featured at the exhibition – FanZone – coordinates buses, VIP taxi services, ride shares and other eco-friendly travel options specifically for sporting and music events. Already operating in Israel, the UK, Germany and France, FanZone launched its sporting event services last year, as well as its concert options six months ago – with the Robbie Williams performance in Israel.“The main thing that makes us unique is that we have a solution for big events,” said Neta Friedlander, director of marketing at the company.For the recent Tel Aviv Bon Jovi concert, FanZone organized 42 group buses, she explained. In addition, the company made arrangements with Israel Railways to provide customers with combined options for buses en route to the Shabbat evening event – which began prior to the beginning of rail service for the night – and train rides for the way home, she added.The company is already set to work with the Union of European Football Associations’ 2016 UEFA Euro Championship in France and is providing services for Sports 5 TV company-sponsored events in Israel, as well as the upcoming December Jerry Seinfeld performances, Friedlander said.Regarding FanZone’s ride-sharing option, Friendlander described the sense of community fostered among the like-minded fans who end up repeatedly riding together to see their favorite teams.“When it comes to sports... one of the beautiful things we see in FanZone [is that] we have regular drivers who come to every game,” she said.