Similar to each year, as child bicyclists and pedestrians take over the country’s major arteries, the nation’s urban centers experienced much more breathable air for the duration of the holiday. 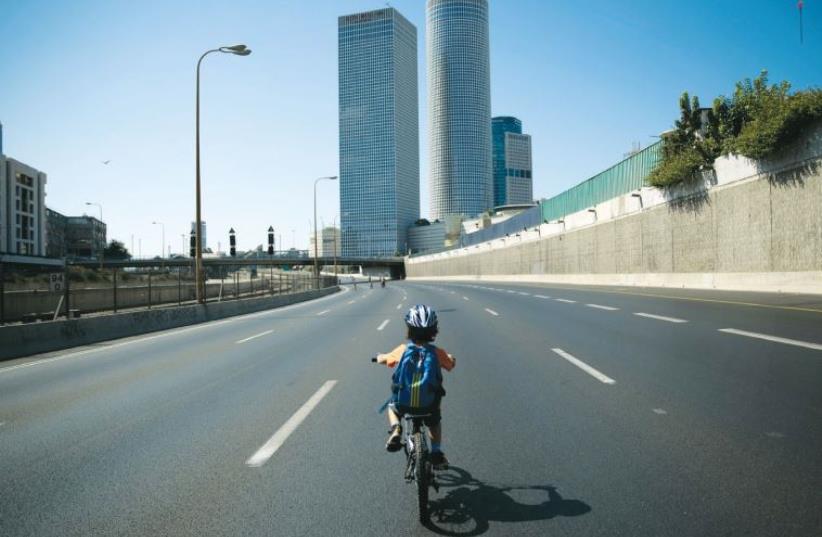 A boy rides his bike on the empty Ayalon highway on Yom Kippur
(photo credit: REUTERS)
Advertisement
As traffic rolled to a stop for the duration of Yom Kippur, so too did levels of nitrogen oxides – contaminants prominent in vehicular emissions.
Similar to each year, as child bicylcists and pedestrians take over the country's major arteries, Israel's urban centers experienced much more breathable air for the duration of the holiday. The dramatic improvement is indicative of transportation's role as the major source of pollution in cities, the Environmental Protection Ministry said on Wednesday night.
In the Gush Dan region, nitrogen oxide levels decreased to about 50 times lower than those prior to Yom Kippur – from 139 parts per billion to just 2.8 parts per billion, according to the ministry. Jerusalem's nitrogen oxide levels plunged to about 64 times lower than pre-holiday values – from 179 parts billion also to 2.8 parts per billion – while those in Haifa fell to about 82 times lower – from 229 parts per billion to 2.8 parts per billion as well, the ministry said.
Nitrogen oxides are able to penetrate deep into the airways, causing symptoms of respiratory diseases and reducing the human body's resistance to bacteria, the ministry explained. Symptoms can range from eye and lung irritations to weakened defenses against respiratory diseases like pneumonia. Children are typically the most sensitive to high exposure, tending to become more sick with colds that settle in the chest and bronchitis, according to the ministry.
In order to continually reduce the amount of nitrogen oxides present in Israeli cities, the ministry stressed that it is implementing a variety of programs, including tax incentives for green vehicle purchases, the conversion of trucks and buses to natural gas, subsidies of apparatuses to reduce heavy vehicle emissions and encouragement of bicycle use around the country.
On Sunday, the government approved Israel's new greenhouse gas emissions reduction targets program, which contains many measures aimed at overhauling the transportation sector, as well as other major pollution sources. Although the approved plan's targets are significantly slimmed down in comparison to those originally presented by the Environment Ministry, among the goals is a decrease in private vehicle usage by 20% by 2030.