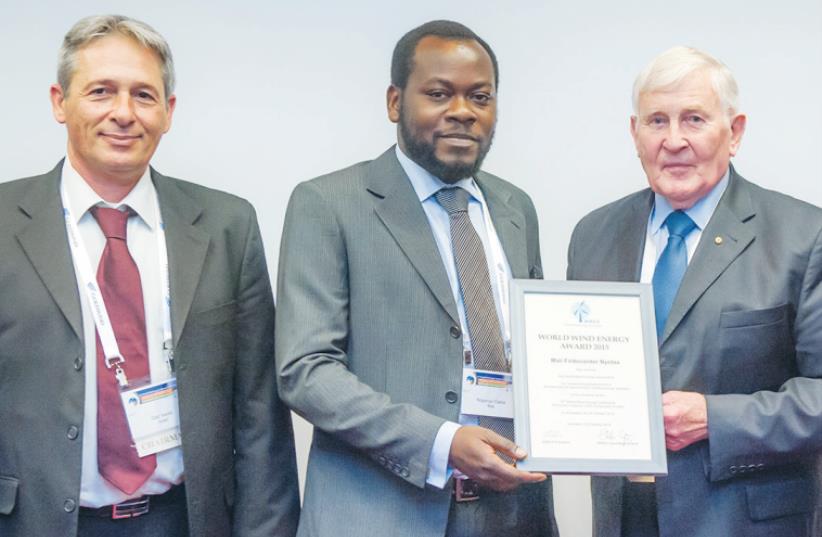 THE WORLD WIND ENERGY AWARD 2015 is presented to Mali-Folkecenter Nyetaa representative Nopenyo Dabla (second left) by WWEA president Peter Rae at the World Wind Energy Conference in Jerusalem yesterday. Also pictured are WWEA vice president and Israel WEA chairman Gadi Hareli (left) and WWEA secret
(photo credit: CHEN DAMARI)
Advertisement
Although the government has thus far failed to realize its visions for the wind energy sector, those involved in the industry are hopeful that the gap between plans and reality will soon begin to narrow.“I believe that wind energy in Israel is just a few years and steps behind solar,” said Uri Noy, a senior partner at the Erdinast, Ben Nathan & Co.law firm, at a conference earlier this week. “The coming years are the years of the maturity of the wind energy. I think there are good reasons for this optimism.”Noy, who specializes in energy and infrastructure, was addressing participants in the 14th World Wind Energy Conference in Jerusalem on Monday – a three-day event that brought together 340 people from 30 countries to discuss global wind energy advancements. While much of the convention focused on international issues facing the sector, Israeli experts also discussed the specific challenges facing the industry at home.The World Wind Energy Conference – organized this year by the World Wind Energy Association, the Israel Wind Energy Association (IsraWEA) and the Paragon Group – is held at different locations around the world each year.Although some 500 MW of renewable energy has been developed in the past five years in Israel, bringing renewables to about 2 percent of the country’s electricity mix, almost none of those megawatts can be attributed to sources other than solar energy, Noy explained. Looking at renewables as a whole, the government has consistently neglected to meet its goals in the sector, he added.“There is a failure to reach targets that have been determined by the Israeli government and the failure to develop until now all other kinds of renewable energy other than solar,” Noy said.The most updated targets, approved by the government in September, call for achieving 17% renewables by 2030.Previously, the goal was to achieve 5% by 2014 and 10% by 2020.While the government approved a 800mw quota for large-sized wind farms in 2011 – eventually downgraded to 730mw in 2014 – today the country only has about 6mw worth of wind energy, on a farm operating since the 1980s, Noy explained.Despite this apparent lack of progress, Noy said he feels some optimism as a result of several bureaucratic hurdles that have recently been overcome, such as the creation of a national outline plan for the sector and the approval of a feed-in tariff scheme.Although companies may still be struggling to cope with some elements of bureaucracy and regulation, projects are being promoted and the various planning committees are learning how to handle the requirements of the wind industry, according to Noy.“It’s still in a very delicate situation,” he said. “There is a lot of effort to be done on the part of regulators and authorities to support these projects and help them happen.”Already, a 21.25-MW project called Sirin Heights – with a 9.35mw farm at Sirin and a 11.9-MW farm at Gilboa – is in the late stages of construction and is slated to be completed in 2016. In addition, a much larger project of around 100 MW for Emek Habacha on the Golan Heights is in the pipeline for 2017, and 500 MW worth of provisional licenses have been distributed.One of the two Sirin Heights farms is already slated to be grid-connected in the coming days, added Gadi Hareli, chairman the Israel Wind Energy Association and now vice president of the World Wind Energy Association.In a phone conversation with The Jerusalem Post on Thursday, Hareli likewise expressed his optimism about the sector’s growth.“I am optimistic, and that’s why I am here,” he said. “I don’t give up.”Hareli praised the recent progress made by the various regulators and bureaucrats toward opening the sector, stressing that “everyone is doing his best.” However, he noted, the problem remains that “no one is the project manager” and that the industry requires a unifying leader.All in all, Hareli said he feels that the industry in Israel still faces two major obstacles. The first, he explained, is simply public perception and awareness – overcoming the idea that “we are a small country and that our influence on global warming is not that much of an issue.”A second obstacle is the ongoing hurdles posed by the aviation and military sectors, where concerns remain about potential interference from wind turbines to radar signals, Hareli said.“But there are so many technical solutions to this so I’m sure that it could have been resolved and resolved very fast,” he added.Acknowledging the legitimacy of many security concerns, Hareli stressed that part of the problem is that the precise nature of the concerns cannot necessarily always be disclosed – particularly in Israel.“I’m an engineer and I’m fully aware of the technologies, and from previous experience with these claims raised, I can tell you that 99.9% of whatever has been said in the past is because of the fear of unknown,” he said. “I’m sure it will be resolved."