“We are waging a long struggle against the building plan, which will bring serious harm to the city,” Nir Barkat said on Wednesday. 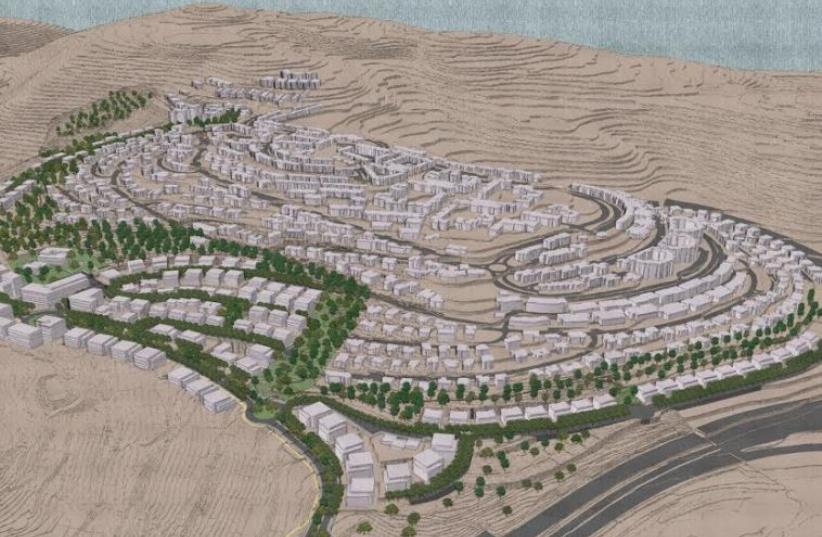 A renderings of the planned Ramat Slopes neighborhood
(photo credit: ISRAEL LANDS AUTHORITY)
Advertisement
Jerusalem Mayor Nir Barkat and environmentalists decried the national planning committee’s approval Wednesday of an expansive new neighborhood that they say will threaten the area’s ecology.The Committee for Preferred Housing Projects (the Vatmal), established in 2014 to fast-track housing projects, authorized the “deposit” of a program from the Israel Lands Authority for the construction of 1,638 housing units in a future Ramot Slopes neighborhood. Located in the northwestern portion of the capital city just south of Ramot, environmentalists have charged that the plans will impact sensitive natural spaces.“We are waging a long struggle against the building plan, which will bring serious harm to the city,” Barkat said on Wednesday.Wednesday’s deposit authorization is followed by a 45-day period in which members of the public can file their objections.The new neighborhood would largely be characterized by relatively low and terraced buildings, creating continuity with respect to the older Ramot neighborhoods, plans published by the ILA explained. However, some of the construction plots may feature higher buildings of between seven and 11 floors, the plans said.Of the 1,638 housing units, 203 will be designated for assisted living and 1,435 will be standard residences – 25 percent of which will be small apartments.An urban plaza will be surrounded by commercial and assisted-living buildings, making up the center of the neighborhood, the ILA plans show. A network of paths will lead to the older Ramot neighborhoods and into the open space to the south of the new area – Mitzpe Naftoah and Emek Haarazim Park, according to the plans.The neighborhood is being designed by Jerusalem-based Ari Cohen Architects & Town Planners LTD.In recent months, environmental activists have continuously protested the plans, which resurfaced from past construction attempts as a fast-track building project for the city following housing cabinet approval in June. Keren Kayemeth LeIsrael-Jewish National Fund, the local Ramot for the Environment movement and the Society for the Protection of Nature in Israel have been leading the fight against the program.At a meeting with municipal officials last week, the environmental groups said that Jerusalem Mayor Nir Barkat likewise voiced his opposition to both the project and the mode of operation of the Vatmal in general.On Wednesday evening, Barkat again expressed his dissatisfaction with the plan’s approval, stressing that he intends to submit a court petition against the Vatmal for depositing the plans contrary to the wishes of the municipality.He said that the city and its residents must focus on building 30,000 housing units in non-disputed areas, “rather than a small number of units in controversial green spaces.”Despite Barkat’s objections and the difficulties a lack of municipal consent may pose to the plan’s implementation, KKL-JNF regional director Hanoch Tzoref explained that the Vatmal’s power as a national planning committee surpasses that of the city.“It’s very difficult to stop a plan once it’s approved in the first stage,” he told The Jerusalem Post.Nonetheless, the environmental groups are planning to do their utmost to halt the program.A survey conducted by KKL-JNF together with Ramot for the Environment and SPNI demonstrated that the area planned for the neighborhood contains a unique ecological niche for flora and fauna, Tzoref explained. “Because of the special ecological merit of this area, we think that this should be preserved,” he said.Highlighting just one example of potential damages to region’s biodiversity, Tzoref said that a representative from SPNI on Wednesday showed Vatmal members how constructing the neighborhood would destroy half of the gazelle habitats in the area. The SPNI representative also raised a counterproposal at the meeting to cancel the plan entirely, which was defeated with nine votes against, one in favor and two abstentions.An additional environmental survey conducted in coordination with the Jerusalem Municipality indicates that Mitzpe Naftoah is an area of particularly high ecological value from an urban perspective as well, Tzoref added. “People think that areas right next to neighborhoods aren’t rich in natural assets,” he said. “We found that this is the No. 1 urban natural site in Jerusalem.”For its part, the ILA stressed that despite environmental concerns, 41% of the area allotted to the Ramot Slopes project would remain open space, including Mitzpe Naftoah and the nearby Emek Haarazim Park. Emphasizing the ecological and scenic importance of the region, the ILA said that the planning process has paid great attention to detail, and has received a supporting opinion from the Vatmal’s environmental consultant.“In light of the fact that this area constitutes just a small part of an expansive open area, which includes Emek Haarazim and Mitzpe Naftoah, the committee’s stance is that the damage will be relatively minimal, and that the plan strikes a balance between the development and conservation needs of the area,” a statement from the ILA said.In response to the ILA’s explanation, Tzoref pointed out that the planners and the environmentalists define Mitzpe Naftoah quite differently. “If you are talking only about the top of the hill, then Mitzpe Naftoah is preserved,” he said. “Nobody was planning to build on the top of the hill.”“We are not only arguing about this hill but the whole area around it,” Tzoref continued.Addressing the ILA’s claim that 41% of the project’s zone will be open space, Tzoref explained that much of this space will exist not as a continuous, expansive area, but instead as isolated plots within the neighborhood itself.While the environmental groups plan to continue voicing their objections to the project, Tzoref said that he remains pessimistic about their potential success, particularly due to what he sees as an unbalanced structure within the Vatmal.“We think this way of planning is bad for the future of Israel,” he added.