Kenyan governor: We must learn from Israeli agriculture expertise

Kisii County governor pushes for increased cooperation between countries in meeting with Israeli ambassador to Kenya. 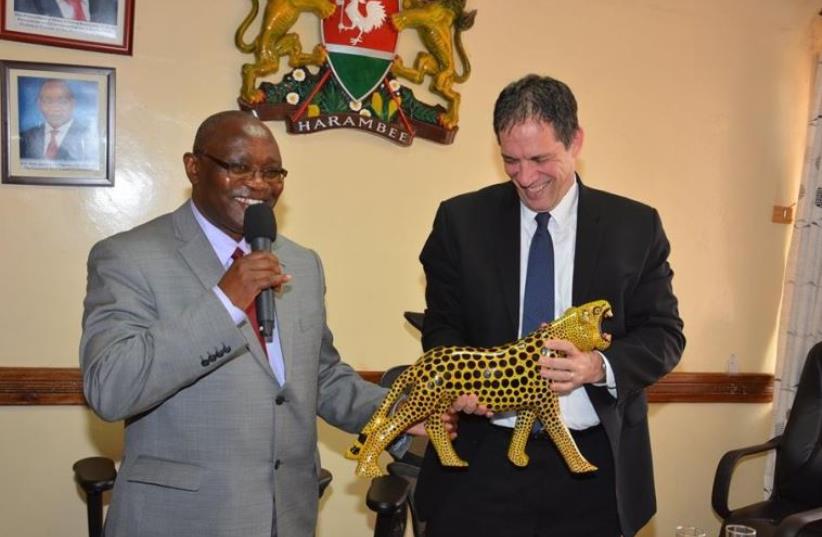 Kisii County Governor James Ongwae (L) and Israeli Ambassador Yahel Vilan
(photo credit: FACEBOOK)
Advertisement
In a meeting with the Israeli ambassador to Kenya last week, a southwestern Kenyan governor pushed for increased cooperation between the two nations in improving his country’s agricultural sector.“We need to learn from Israel in the area of agricultural management and land use,” said Kisii County Gov. James Ongwae.“The State of Israel has made achievements in about 65 years despite its arid environment.”During his meeting with Ambassador Yahel Vilan last week, Ongwae requested that the Israeli government support Kisii County in further equipping the Science and Technology Park housed within the Kisii Agricultural Training Center, according to the governor’s office. Discussing Kisii County’s struggle with continuously diminishing land availability, the governor stressed the need to “adopt new technologies like greenhouse farming” over more traditional farming techniques, a statement said.“We look forward to getting support from Israel in equipping our newly established Science and Technology Park, to facilitate business incubation and technology transfer to our farmers,” Ongwae added.Vilan was visiting Kisii County for the launch of the area’s “Catch the Rain Project” at Itierio Primary School in Bonchari Sub County – which includes a 30,000-liter rainwater harvesting kit, a fish pond, a greenhouse and drip irrigation units.The project aims to serve as a demonstration center for the local Bomorenda ward area, and a precursor for 45 such projects in other wards, the governor’s office said.The Colorado-based School Communities Offering Projects that Empower (SCOPE) program is funding the project.While the Israeli Embassy is not involved in an official capacity, the Israeli-run firm Amiran Kenya supplied much of the greenhouse and irrigation equipment for the project, Vilan told The Jerusalem Post on Sunday.At his meeting with the governor, Vilan voiced the Israeli government’s willingness to support the country in the fields of agricultural research, education, environmental conservation, health and water. Describing Kenya as a key friend in East Africa, the ambassador emphasized the importance of building upon the relationship between the two countries.Vilan pointed out that the Israeli presence in Kenya’s agriculture continues to expand. For example, the Israeli company Green Arava recently signed a deal to provide drip irrigation to coffee farmers. The deal, according to The Star newspaper, is worth some $300 million and will bring irrigation to farmers in the Kenya Planters Cooperative Union.Regarding collaboration between Israel and Kenya on a governmental level, Vilan said he told Ongwae that he would be happy to increase partnerships through Mashav, Israel’s Agency for International Development. Mashav is particularly active in a variety of African and Asian countries, furthering drip irrigation and other types of agricultural projects in many different countries.Bolstering agricultural activity in Kenya would not only be significant to the African nation, but would be beneficial to Israel as well, the ambassador stressed.“It’s important to Israel because Kenya has been a very friendly country to Israel throughout the years, so it’s one of the ways we can show our support and friendship,” he told the Post. “Also, economically, we think there is a big potential for Israeli companies.”