Developed by Israeli researcher Yaron Zinger at Monash University in Australia, successful tests of the Biofilter have been completed already in Kfar Saba in 2010. 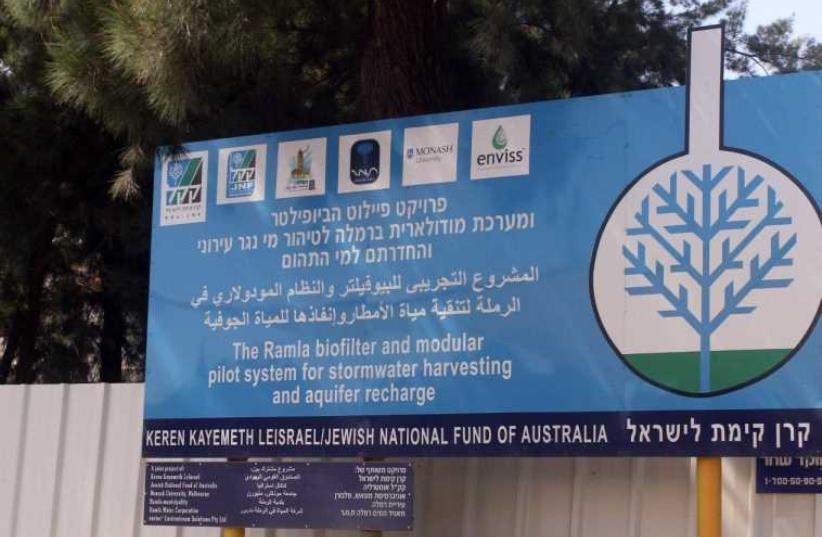 biofilter inauguration in Ramla on Wednesday
(photo credit: RONI SHITZER KKL-JNF)
Advertisement
Aiming to salvage rainwater, Keren Kayemeth LeIsrael- Jewish National Fund has completed the installation of a “Biofilter” system in Ramle on Wednesday.This is the second such installation of the Biofilter in an Israeli city, occurring as part of a study to examine the mechanism’s efficiency in trapping and purifying surface runoff. It was developed by Israeli researcher Yaron Zinger at Monash University in Melbourne, and successful tests have been completed already in Kfar Saba, where KKL-JNF installed the mechanism in 2010. The hope is that the Biofilter will eventually be integrated into municipal plans throughout the country.The Biofilter employs both physical and biological processes, trapping and storing water, which then passes through a screening component that uses adapted vegetation and sandy soil layers.Bacteria within the Biofilter is able to remove a variety of pollutants from the water and then enable the permeation of clean water into the aquifer, KKL-JNF said.Such a tool can play a critical role in urban infrastructure, because as construction around Israel expands, rainwater is not able to effectively percolate into regional aquifers, the organization explained.Instead, rainwater flows on roads, carrying along with it debris and pollutants and emptying out into the drainage systems and from there, into streams and seas. The groundwater level declines, and the aboveground waterways become increasingly contaminated, the organization said.While in Kfar Saba, KKL-JNF tested the mechanism in a new neighborhood. In Ramle, the organization is evaluating the performance of the Biofilter near a major traffic artery – Route 40.In Bat Yam, the next municipality slated to receive a Biofilter, researchers will look at its operation in an established neighborhood of the coastal city.The new and future facilities in Ramle and Bat Yam, which have the support of JNF Australia, are being installed with the help of Blue Box donors and members of the JNF Australia Gold Patrons Club.The technology aims to absorb up to 90 percent of surface runoff in its area of installation and is 14 percent cheaper than typical desalination, requiring less energy and taking up less space, KKL-JNF said.“The Biofilter is designed to be built within cities, on traffic islands or in city parks, as part of the city’s green lungs,” the organization said.