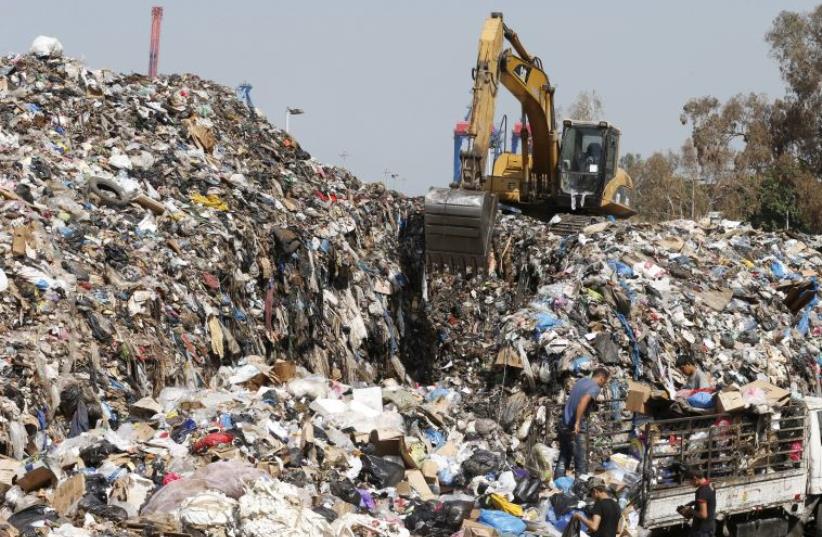 Men unload trash from a pick-up truck as scavengers sift through garbage at a temporary dump
(photo credit: REUTERS)
Advertisement
During its first two years of operation, the Environmental Protection Ministry’s David Unit has thwarted some 300 attempts to illegally dump trash in the West Bank, the ministry reported on Wednesday.Since the unit’s establishment in December 2013, its members have confiscated a variety of waste types destined for unauthorized dumping – such as wood shavings for charcoal and materials that could be used to manufacture explosives, the ministry said.Companies often make use of trash-smuggling vessels to avoid landfills in Israel, where they must pay levies for both sorting and disposal of waste, the ministry explained.“The environmental impact of illegally dumping waste are severe, and include water contamination, soil contamination, and waste fires that constitute a nuisance to nearby residents,” the statement said.On the night of December 22 alone, the David Unit, in cooperation with the Civil Administration for Judea and Samaria, stopped three trucks carrying smuggled electronic waste from Israel to the West Bank. The trucks contained about 100 tons of trash heading to Hebron , the ministry said.Just two weeks ago, the David Unit stopped and confiscated seven vehicles carrying smuggled waste. The drivers were summoned to a hearing and may face the revocation of their waste transfer permits and further police complaints, the ministry said.