“Following a complex and professional cleanup conducted by the Environmental Protection Ministry, the northern coast has been returned to the public.” 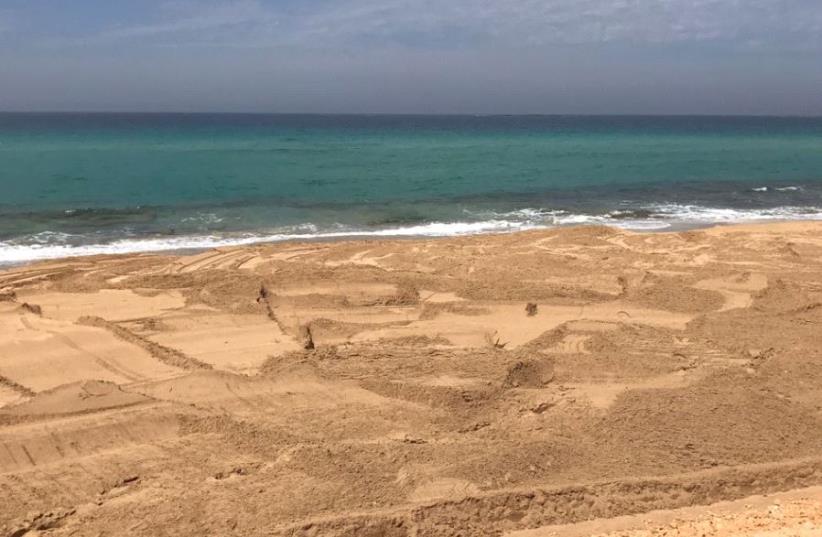 A section of the Nahariya beach following cleanup.
(photo credit: YORAM VARGA)
Advertisement
After a six-year intensive cleanup of friable asbestos from areas around the Western Galilee, the Environmental Protection Ministry is now welcoming visitors to a variety of sites in time for the Passover holiday vacation.To mark the end of the first stage of the cleanup project, the ministry on Sunday opened one of the most prominent places affected by the asbestos contamination: the western portion of northern Israel’s Nahariya beach.Over the past six years, some 150,000 cubic meters of soil polluted by asbestos were removed throughout the region at a cost of NIS 327 million, with 40,000 cubic meters alone eliminated from the beach, at a cost of NIS 80m., the ministry said.“Following a complex and professional cleanup conducted by the Environmental Protection Ministry, the northern coast has been returned to the public,” Minister Ze’ev Elkin said. “This is after the removal of a health and environmental hazard.”Due to the complex nature of the asbestos removal involved and “the severity of the unique hazard to the Western Galilee,” Elkin explained that the government spearheaded the project, financing the costs in partnership with Eitanit – a former asbestos cement factory in the Nahariya area responsible for the contamination.The ministry and the former owners of Eitanit split the cleanup costs about half-andhalf.Operating from 1952 until the factory was closed in 1997, Eitanit was responsible for most of the asbestos waste that accumulated across the Western Galilee, according to the ministry.The government passed the Law for the Prevention of Hazards from Asbestos and Harmful Dust in March 2011, tasking Eitanit with paying up to NIS 150m. worth of the cleanup, and the evacuation project began later that month.During the first stage of the project, waste was cleaned or removed from 342 sites, including the beach, the ministry said. Removal and cleanup has occurred at areas in Nahariya, Ben Ami, Betzet, Beit Ha’emek, Liman, Bustan Hagalil, Ga’aton, Yehiam, Kabri, Nes Amim, Netiv Hashayara, Sa’ar, Evron, Rosh Hanikra and Mizra’a.“A significant part of the project has been completed before the [Passover] holiday, allowing the public to enjoy the beach during this holiday, as well as the spring and summer months,” Elkin said. “We are currently examining, together with the municipality and other entities, how we can continue the project for the benefit of the public and the area.”The Nahariya beach suffered from significant contamination as it was regularly saturated with asbestos from Eitanit’s discharges of waste into the sea beginning in the 1980s, the ministry said. In 2002, the Nahariya Municipality began conducting a partial cleanup of the area, removing 40,000 cubic meters of waste at a cost of NIS 80m.Upon completing the latest cleanup project over the past six years, the Environment Ministry has now deemed the western strip of the beach safe for visitors. However, the ministry stressed that this is the only part of the beach where soil samples have been taken, to ensure the absence of asbestos from the sand – where beachgoers spend significant amounts of time.According to the ministry, asbestos was also found on the rocks in the area where the sand meets the sea, where Eitanit’s drainage channel was once located. The rocks are covered by concrete casting, which are supposed to remain durable and safe for years, but the ministry continues to test and monitor their condition. At this point, the project’s steering committee has decided not to treat the rocks themselves, as they present a much lower risk than the contaminated sands, the ministry said.