Sites welcomed some 430,000 visitors on Sunday. 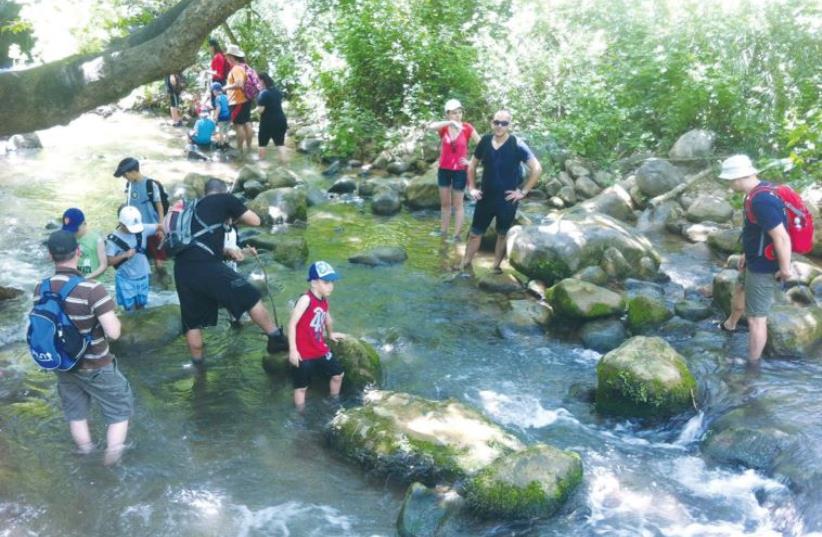 Nation celebrates spring festival at natural wonders.
(photo credit: ISRAEL NATURE AND PARKS AUTHORITY)
Advertisement
The country has gone into full vacation mode as parks, forests, nature reserves and archeological sites welcomed some 430,000 visitors on Sunday, the first day of Hol Hamoed, the intermediate days of Passover.According to the Israel Nature and Parks Authority, 180,000 people visited the nation’s parks and nature reserves while another 250,000 visited parks maintained by Keren Kayemeth LeIsrael-Jewish National Fund. Before noon, the INPA had reported that 50,000 people had already visited its sites.At Lake Kinneret (the Sea of Galilee), tens of thousands arrived at its shores. Some beaches around the Kinneret had reached full capacity and were not accepting any new entrants.Last year on the first day of Hol Hamoed, the INPA reported 200,000 visitors to its sites, while KKL-JNF reported 150,000.Temperatures throughout the country on Sunday were high, despite partial cloud cover in some spots. Most cities saw maximum temperatures in the high 20s and low 30s. Eilat had a high of 36˚ and earned the title of hottest spot, while Tiberias came in second with a 33˚ high. The evening hours brought a bit of a cool as lows hovered around 20˚ and even lower in most parts of the country. According to the Israel Meteorological Service, the heat is expected to drop slightly throughout the week, though temperatures will remain “unseasonably warm.”With almost half a million people out in full vacation force, there were also a few injuries.In one incident at the Ein Prat nature reserve, a 27-year-old man was moderately injured by a falling eucalyptus tree. He was taken to Hadassah University Medical Center in Jerusalem’s Ein Kerem. Authorities at the nature reserve noted that Magen David Adom had incorrectly reported earlier in the day that the entire site was closed due to falling rocks, but emphasized in a statement that only the reserve’s eucalyptus grove and Tamar pool were closed following the incident.In a separate incident, a teen sustained a back injury while trying to jump off a four-meter- high wall at the Ein Akev spring near Sde Boker. He had to be evacuated by an MDA helicopter to Soroka University Medical Center in Beersheba for treatment. In a third incident, a hiker fell down a steep cliff while hiking along the Temarim Stream near the Dead Sea. He sustained light injuries from the fall and was taken by ambulance to a nearby hospital after being rescued by a police rescue team.Nurit Dreifuss, a KKL-JNF park ranger at the Ben Shemen Forest near Lod, told The Jerusalem Post on Sunday that the main things to watch out for while hiking are fires and – though less threatening – garbage. In her four years working for the KKL-JNF forestry department, her message to hikers was clear: Don’t start fires and don’t leave trash.“Each of us deserves a clean forest and it is important to keep it clean for the wildlife too,” she said. “The forests are open to the whole public for free, so visitors should keep in mind those who come after them,” she said.If anyone spots people leaving garbage, starting bonfires or creating any other kind of violation, Dreifuss said the public can report it to the forest hotline at 180-350-550.On a lighter note, Dreifuss also spoke about her favorite sites to visit when not on duty.In the North, she highly recommends the Lake Hula Nature Reserve in the Hula Valley. It is a central winter resting spot for millions of migrating birds and as their host areas in Europe begin warming up, this will be the last chance to see them until next winter.Another one of her favorite northern getaways is Goren Park, home to Montfort Castle and Kziv Stream. Furthermore, parts of the park are handicap accessible, she noted.For those looking for a bit of nature in the central region, Dreifuss recommended the Ayalon-Canada Park for its diverse ecology, many springs and archeological sites, including a Roman bathhouse.