The structure, comparable in height to an 80-storey building, is now under construction in Plot B of the ambitious Ashalim Solar Field 35 km. south of Beersheba. 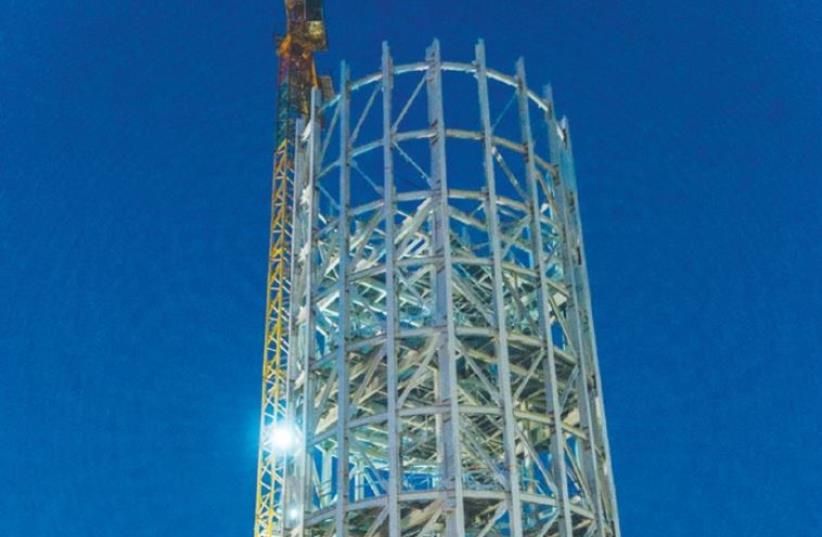 THE 250-METER-HIGH Ashalim Solar tower, now under construction south of Beersheba.
(photo credit: BRIGHTSOURCE ENERGY)
Advertisement
When one thinks of “solar power,” one envisions an array of photo-voltaic cells stretching to the horizon. However, if all goes according to plan, next year Israel will be home to the world’s tallest solar thermal tower soaring 250 meters above the Negev Desert.The structure, comparable in height to an 80-storey building, is now under construction in Plot B of the ambitious Ashalim Solar Field 35 km. south of Beersheba. When completed in late 2017, the solar thermal power station will generate 121 megawatts of electricity daily – enough to power 120,000 homes. During daytime hours, it will be able to supply 1 percent of Israel’s electricity needs.The project, which costs NIS 2.8 billion, comprises 50,600 computer-controlled mirrors spread across 3.15 square kilometers that focus sunlight toward a boiler at the tower’s apex. The water, super-heated to 600ºC, provides steam to drive a series turbines and generators. The 121 MW output will bring Israel closer to its goal of generating 10 percent of the country’s electricity from renewable resources by 2020.Currently, renewable resources generate 2.6 percent of Israel’s electricity.The project field is owned by Megalim Solar Power Ltd., a consortium made up of NOY Infrastructure & Energy Investment Fund (49.9% ownership), BrightSource Energy (25.05%) and General Electric (25.05%). GE is responsible for the engineering, procurement and construction aspect while Brightsource is providing the solar technology itself.Ashalim consists of three plots that have a tender to provide 250 MW of power to Israel Electric’s grid when completed. The twin solar thermal power stations each have a 121 MW capacity, and a third will be able to provide between 30 and 40 MW.Plot A’s future was a bit uncertain in late June after the field’s owner, Spanish company Abengoa S.A., requested to be dropped from the project due to financial woes. NOY fund and Spain’s TSK engineering development company were requested to replace Abengoa. Though the Finance Ministry had weighed the option of canceling the Plot A section altogether, the ministry’s accountant-general ruled that the economic damage would be too great.