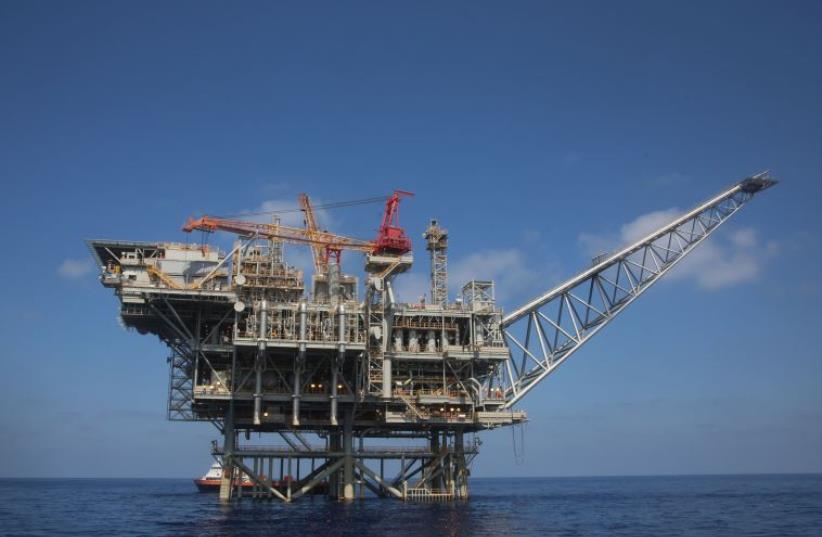 Tamar gas field‏
(photo credit: MARC ISRAEL SELLEM/THE JERUSALEM POST)
Advertisement
Prospective natural gas resources located in the eastern Mediterranean Daniel license zones may come close to the quantities found in Israel’s Tamar reservoir, a Tel Aviv Stock Exchange report revealed Sunday.Best estimates for resources in the “Og Prospect,” located within the Daniel East license, as well as those for the entire Daniel West zone, amount to 1.1 trillion cubic feet (33 billion cubic meters) and 7.9 tcf (221 BCM), respectively – or about 254 BCM in total – according to the report filed by the Isramco Negev 2-LP exploration firm.In comparison, the Tamar reservoir, which has been providing gas to Israel since March 2013, contains about 282 BCM of gas.For both Daniel East and Daniel West, estimates for the “unrisked gross prospective resources” were sent on Friday to the license partners by the Texas-based firm Netherland, Sewell and Associates, Inc.In the Og prospect, located within Daniel East, Netherland, Sewell and Associates said the best estimate of gas contents was 300.7 bcf (8 BCM) in Og’s upper sand, and 884 bcf (25 BCM) in its lower sand. In total, the best estimate for the license was therefore about 1.1 trillion cubic feet (33 BCM).Netherland, Sewell and Associates estimated a 38 percent chance of a geologic success in finding gas in Og’s upper sand, and a 43% chance in the lower sand.The upper and lower sands of Og also may contain a total of 0.4 million barrels of condensate, according to best estimates published in the report. Condensate is a liquid, hydrocarbon by-product of natural gas extraction that can be used in the petrochemical industry.For the Daniel West license area, which includes nine blocks that contain various divisions, the Netherland, Sewell and Associates report projected a best estimate of 7,885.5 bcf, or 7.9 tcf (221 BCM), of gas.In the nine blocks of Daniel West, the probabilities of geologic success range from a low of 24% in the DWN3 block to a high of 42-57% in the two sections of the DWCS1 block, with the projected success rates in the remaining blocks falling somewhere in between these figures.Best estimates for the amount of liquid condensate in the Daniel West zone were about 2.8 million barrels, the report said.Regarding both Daniel East and Daniel West, Netherland, Sewell and Associates stressed that the estimates made were for prospective resources only, and that “the prospective resources included in this report should not be construed as reserves or contingent resources; they represent exploration opportunities and quantify the development potential in the event a petroleum discovery is made.”Isramco owns 65% of both Daniel licenses, while Modiin Energy Limited Partnership has a 15% share. I.O.C. – Israel Oil Company Ltd. owns 10% of the zones, while ATP Oil & Gas Corp. and Petroleum Services Holdings AS each have 5% stakes.National Infrastructure, Energy and Water Minister Yuval Steinitz welcomed the report of gas prospects in the Daniel zones.“As I declared many times, there is a considerable probability of additional significant gas fields, awaiting discovery in Israel’s economic waters, and which are expected to contribute greatly to the economy, to energy security, to increasing competition and to the export of gas abroad,” Steinitz said. “The Energy Ministry will closely follow the data and act to promote drilling in area, in order to ensure the potential of the gas and its production.”Dr. Amit Mor, CEO of the Eco Energy Financial and Strategic Consulting firm, called the data “encouraging” due to the high likelihood of geological success, but also offered words of caution.“Nevertheless, there is still a long way to go,” Mor told The Jerusalem Post on Sunday.“Exploration drilling should take place, which will take time.”Noam Pinko, an analyst at Psagot Investments, likewise stressed that “there is still no need to open bottles of champagne,” as it will take at least a year to know whether a viable gas reservoir exists in the license zones. First and foremost, he explained, the partners will need to raise funds and bring in a high-quality drilling operator to conduct such explorations.“In terms of the Israeli economy, if gas was discovered there, this would be excellent news, because there would be real competition among reservoirs held, in part, by different owners,” Pinko said.“Thus, if it would finally be decided to convert coal-fired power plants to gas, the Israel Electric Corporation would be able to implement a true bidding process with several entities,” he continued. “Existing customers would also in the future be able to exchange, according to their contracts, some of their Tamar gas for another gas source.”However, MK Shelly Yacimovich (Zionist Union) – who has been among the most vocal opponents of the government’s handling of the natural gas sector – argued that a discovery at Daniel would not generate the hoped for competition. Isramco, the controlling shareholder in the Daniel licenses, also holds a sizable chunk of the Tamar reservoir, she explained.Today, Isramco owns 28.75% of Tamar, as opposed to the 36% share of Noble Energy and the 15.625% pieces of two Delek Group subsidiaries, Delek Drilling and Avner Oil Exploration.However, Noble Energy is expected to downsize to 25% and the Delek companies must exit the basin entirely within six years, in accordance with the country’s new gas sector framework.The framework – the result of a comprehensive deal aimed at settling disagreements between gas developers and the government, as well as fostering competition in the sector – was officially activated on December 17, and continues to face fierce disapproval from the Knesset opposition and activists.“The possibility of a discovery in Daniel East and Daniel West is unparalleled good news for the Israeli economy and Israeli citizens, but if the outline is not revoked, it will only intensify the power of the monopoly,” Yacimovich said. “The gas price will be outrageously high and the contribution to the Israeli consumer will be zero each round.”If the outline did not provide the country’s largest gas operators with exemptions from antitrust policies as well as guaranteed stability for the next decade, a new discovery could be leveraged to generate competition with the Tamar and neighboring Leviathan reservoirs, she argued.“Instead, the Noble-Delek-Isramco conglomerate just received more gas, in order to increase the power of the monopoly,” Yacimovich said.