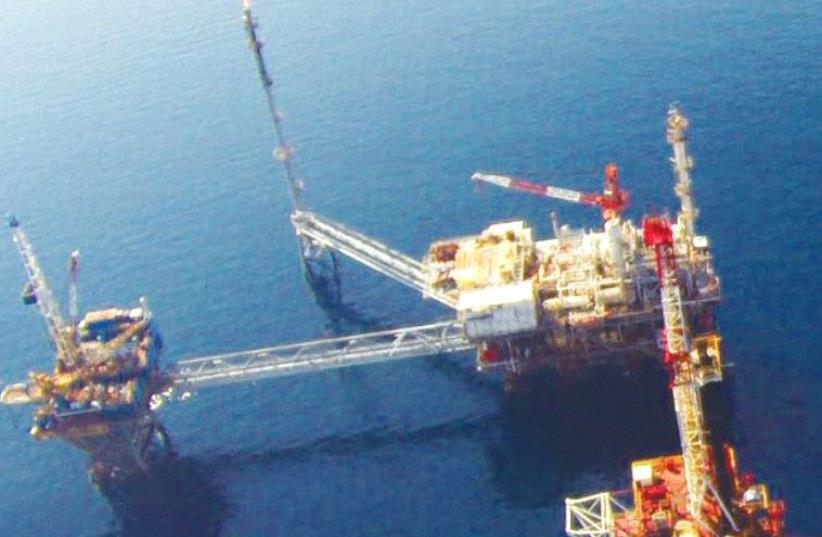 AN AERIAL SHOT of Prinos, a Greek oil reservoir that belongs to the energy firm Energean.
(photo credit: Courtesy)
Advertisement
The expected purchase of the Karish and Tanin gas reservoirs by the Greek oil and gas company Energean will be a catalyst for other international companies interested in exploring Israel’s Mediterranean, a source linked to the project told The Jerusalem Post on Tuesday.Energean’s entrance into the Israeli gas industry “opens the sector,” the source said.“The signal to the market is given: there’s something going on in Israel. You used to have a monopoly. Now you have a potential market.”Although still pending Israeli government approval, the $148.5 million deal was signed by Athens-based Energean Oil & Gas in mid-August to purchase the gas reservoirs from two Delek Group subsidiaries, as well as pay the Israeli companies royalties from future gas and condensate sales. The likely sale of Karish and Tanin marked a first concrete step toward advancing Israel’s gas industry, following recent approval of the contentious “gas outline” that rattled the sector for all of 2015.Meanwhile, just a week and a half before the signing, the National Infrastructure, Energy and Water Ministry announced that the country, after a four-year hiatus, would be opening up its Mediterranean waters to new exploration – marketing 24 new blocks in an international tender.“It’s very important that ahead of this tender regarding the 24 blocks, that there’s a newcomer that gets in the Israeli market,” the source said. “It’s not just Delek and Noble as we’re used to.”The entry of Energean into the sector, according to the source, will incentivize other companies to come explore as well.“It encourages other companies to participate, to check what’s going on,” the source said. “That’s what happened in Cyprus.One got in and the others followed.”Israel’s decision to open up its waters is coupled not only with its own existing finds, but also with ongoing projects in Cyprus and last summer’s discovery of Egypt’s large Zohr reservoir. This latest find has accelerated the development occurring in the entire region, according to the source.For its part, Energean has operated oil and gas-producing assets since 1981, and currently holds four licenses in Greece and one in Egypt. Of those, the Prinos field is producing oil and one South Kavala is producing gas. The company has made $300 million in investments over the past year, mainly in Greece, and is currently executing new investments in production that amount to about $200m.In addition to the Israeli deal, Energean has signed an agreement for the exploration of two offshore blocks in Montenegro, also pending that government’s approval.Once the Karish and Tanin purchase receives government approval, the company will deliver a development plan for the reservoirs within six months, the source told the Post.Many experts stressed that the development of Karish and Tanin will not likely happen before development of the much larger, 621-billion cubic meter Leviathan reservoir, which itself faces potential financing hurdles. But the source argued this may not be the case.One question frequently posed regarding the two reservoirs is whether their relatively small size – at 58.7 bcm total – financially justifies construction of an independent infrastructure.“It is a project that may be implemented without Leviathan,” the source said. “It is not necessarily connected to Leviathan.”Energean, which would supply gas to the domestic market through Karish and Tanin, has a number of potential alternatives regarding infrastructure required for the reservoirs, such as building independent facilities, sharing them with Leviathan, or gaining third-party access to infrastructure developed by an state-appointed operator.Asked by the Post whether the firm was leaning toward building its own facilities or sharing them, a spokesman for Energean responded that the company has “nothing to say for the time being,” until the development plan is issued.Regardless of the details of the development plan, and whether or not Karish and Tanin’s advancement will be linked to that of the Leviathan reservoir, the project’s source reiterated the critical role Energean’s entry will serve in attracting more players to the sector in Israel.“The signal has already been given,” the source said.