Steinitz criticized what he said were six years’ worth of delays in getting the Leviathan Reservoir’s development off the ground. 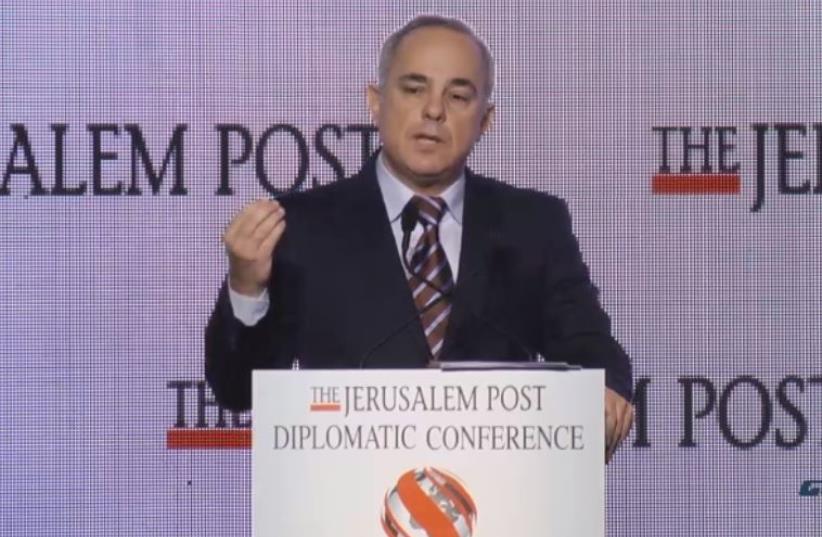 Yuval Steinitz at the Jerusalem Post's Diplomatic Conference
(photo credit: Courtesy)
Advertisement
With Israel’s natural gas market seemingly moving forward, it came as a surprise on Wednesday when National Infrastructure, Energy and Water Resources Minister Yuval Steinitz kicked off the fifth annual Israeli Infrastructure Conference with harsh words.Steinitz criticized what he said were six years’ worth of delays in getting the Leviathan Reservoir’s development off the ground.“These past six years have caused tens of billions of shekels worth of damages.Some even say NIS 100 billion,” he lamented. “We’ve lost financially and lost environmentally.”“Even with 12 regulators, none were able to make a decision,” he said.However, now that the nation’s natural gas framework has been approved, Steinitz praised the development of the natural gas industry for being the “central factor” in warming regional relations. “Natural gas was the main reason for the reconciliation and normalization with Turkey,” he said, while also pointing out that gas exports were among the topics of discussion when Egyptian Foreign Minister Sameh Shoukry visited Israel on Sunday.Later in the day, Yaniv Friedman, deputy CEO of Delek Drilling and Avner Oil Exploration, said that the news of warming relations with Israel’s neighbors were signs of a “new Middle East.”“We have been in negotiating with the Turks for a long time,” Friedman said. “Now with normalization [of ties], that will be accelerated.”Regarding Delek Group’s two 26.5% shares in the Karish and Tanin natural gas reservoirs, which the company is in the process of shedding, Steinitz called on the gas companies to “hurry up,” noting that they were already halfway through the allotted 14-month sale period. “Don’t wait until the last minute.There this no guarantee that we’ll agree to a 60-day extension.”Steinitz threatened that the state will take over responsibility for the sale of Karish and Tanin, which contain a combined 70 billion cubic meters of gas, if the companies blow past their deadline.Friedman responded to Steinitz’s warning, saying that they were in the “very advanced stages” of the Karish-Tanin sale. Speaking about the 500 billion cubic meter Leviathan reservoir, of which Delek and Avner each own a 22.67% share, Friedman noted that they were also determined to stick to the development timetable for that as well and repeated the consortium’s goal of having gas begin flowing to customers by the end of 2019.Meanwhile, Adi Hachmon, head of the energy sector at the Finance Ministry’s Budget Department, emphasized the ministry’s understanding of the importance of keeping the natural gas market competitive.He said for the time being, the Finance Ministry is trying to not interfere but said that “if it seems there issues, we will do what we need to do.”Hachman was referring to a clause in the updated gas framework that allows the government to have input in the country’s natural gas policy. An original version, rejected by the High Court, had called for a 10-year freeze on gas prices and regulations.Although the ability to oversee prices was “still on the table,” he said the Ministry had “chosen [market] competition over price controls.”“We think there are possibilities of developing more gas fields, and oversight will not lead to new development,” he said.