With the help of more than 50,000 volunteers, Leket Israel rescues 1.5 million hot meals and some 11 million kg of produce and perishable goods annually. 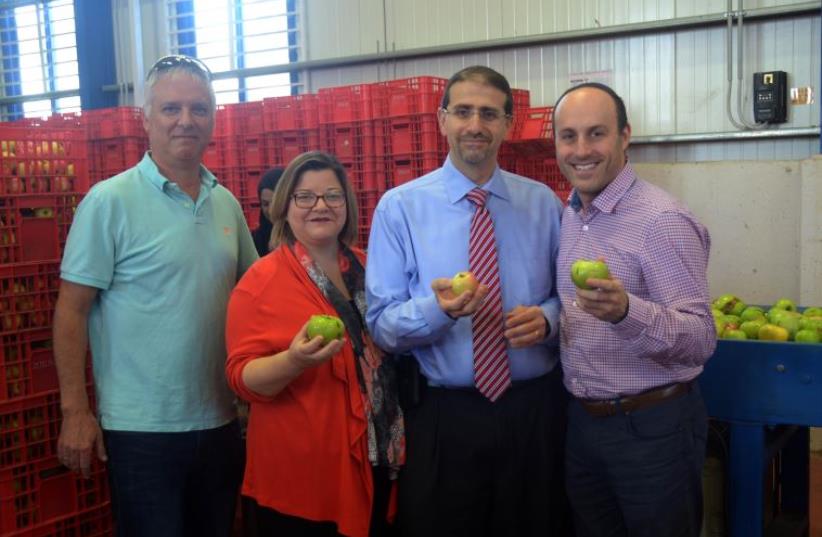 Dan Shapiro and his wife Julie Fisher at the Leket Israel facility
(photo credit: Courtesy)
Advertisement
Apples, potatoes, carrots, and dairy products – all food that would otherwise go to waste if not for the work of Leket Israel – The National Food Bank.“Take a look at these apples, what’s wrong with them?” Joseph Gitler, founder and chairman of Leket Israel said on Thursday. “Nothing, they are perfectly fine and these would all have gone to waste.”Gitler was speaking to US Ambassador Dan Shapiro and his wife Julie Fisher, who are volunteers of the organization, during a tour of the newly rebuilt Leket Israel logistics and distribution center in Ra’anana.In August of last year, a fire broke out at the main logistics center. Triggered by an electrical short, the fire caused extensive damage to the building and to the food and equipment stored at the center.“The fire was devastating, but the silver lining is that we could rebuild the center to better answer our needs,” Gitler told the ambassador.The newly rebuilt state-ofthe- art center features a massive sorting room where people from all sectors of Israeli society volunteer to sort produce alongside the sorting machines. Adjacent to the sorting room are several chilled areas for storing fresh dairy products and produce, before they are shipped out and redistributed.“These rooms can be full one week and completely empty the next, depending on the produce and products we receive,” he explained.Outside the logistics center, towers of empty crates stand testament to the amount of food the organization is able to rescue.“I think we have the largest supply of plastic crates in Israel,” Gitler joked.With the help of more than 50,000 volunteers, Leket Israel rescues 1.5 million hot meals and some 11 million kg. of produce and perishable goods annually.Food that would have otherwise gone to waste is redistributed to 180 nonprofit partners caring for the needy, reaching more than 140,000 people weekly.Sitting down with The Jerusalem Post following the tour, Gitler said, “There is a dissonance between how much food we waste and the abundance and overproduction in the West.”According to the founder, one-third of food that is grown around the world is going to waste. Couple that with the large number of people who desperately need food and the situation is “unacceptable,” he said.One of Leket’s main projects year-round is its gleaning initiative, which sends thousands of volunteers and dozens of paid pickers into fields and orchards to gather produce that was donated or left un-picked by farmers.“Leket’s gleaning operation is the largest operation in the world,” Gitler said. “And we’ve only touched the tip of the iceberg.”The organization recently formulated a new plan, Leket 2020, which, by the year 2020, aims to quadruple the amount of food rescued – from some 15,000 tons to over 50,000 tons annually. In addition, as part of the plan, Leket is investing resources in updating and renovating its smaller nonprofit partners so that they can be better equipped to expand as well.Despite all its efforts, Gitler said, “It’s never enough.” He said that real change needs to come from Israeli society and from a social awareness of the problem, which is lacking in Israel.“You can especially see this in the culture of how people load their plates in hotels,” he said.“People always laugh when I say this, but it’s true.”Gitler continued, “We need to change the culture because our use of food is disturbing, about 50% of food waste is happening in our own homes.”Gidi Kroch, Leket Israel’s CEO, told the Post that the organization was at a “cross point.”“We can grow incrementally or make a huge leap forward.We have the infrastructure but it is a question of funding,” he said.According to Kroch, in Europe the issue of food waste is on the agenda, and people are aware that it is a growing problem that governments are taking action to address. This is not the case in Israel, Kroch said, adding that the government has been unresponsive to the issue of food insecurity and food rescue.“The government needs to input [the issue] into societal awareness. We are an excellent tool and they can utilize us to rescue food and to feed the poor.”