"If we don't win here, the sand that is currently saving the cliff will be thrown into the deep sea," says Environmental Protection Minister. 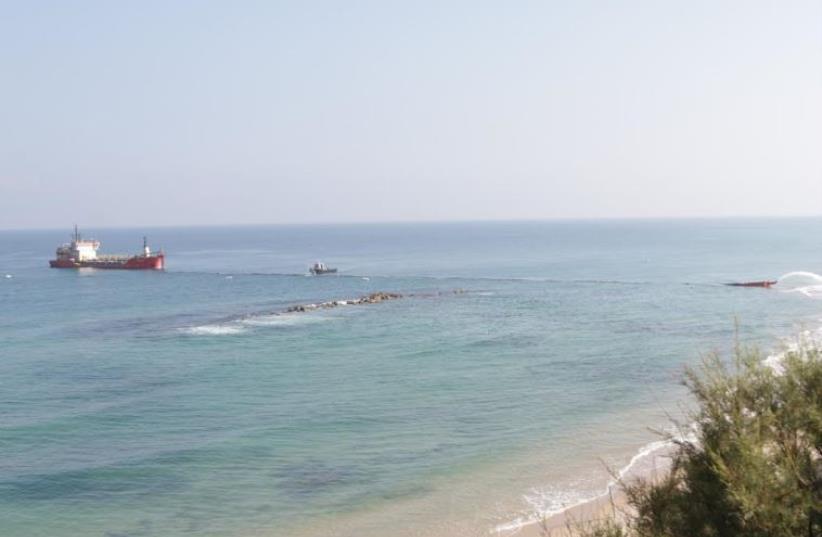 Ashkelon beach.
(photo credit: BENNY WEINER)
Advertisement
In an effort to prevent further cliff erosion, the Environmental Protection Ministry is now overseeing works to restore sand to the Ashkelon beach.A few weeks ago, ministry officials said they had received a permit request from the Israel Electric Corporation to extract 80,000 cubic meters of sand from areas adjacent to the Rutenberg Power Station in order to deepen the anchorage area for ships that dock there and dispose of the sand farther into the sea. The officials said they decided that rather than granting the request, the sand must be returned to the Ashkelon beach. The project of relocating the sand has begun in recent days.Ships are now bringing sand to the Ashkelon beach, a spectacle that Environmental Protection Minister Avi Gabai observed with the city’s mayor, Itamar Shimoni, on Wednesday.“Israel must prevail over bureaucracy,” Gabai said. “If we don’t win here, the sand that is currently saving the cliff will be thrown into the deep sea. When I heard that the IEC is planning to take the sand that has accumulated near its Ashkelon power station and dump it into the sea, I explained that I would not let this happen. We will not sit by quietly and allow such foolishness.The sand of Ashkelon will save the beaches of Ashkelon.”The coastal cliffs are located along a 45-km. stretch of the Mediterranean coastline, between the cities of Ashkelon in the south and Hadera in the north. Made of kurkar – a type of limestone – the cliffs tower at heights ranging from 10 to 50 meters, the ministry said.The ministry called the cliffs a “natural asset”and explained that they have been retreating eastward gradually for years.The Ashkelon region could end up losing up to a meter from just one strong winter storm, it warned. In some areas along the coast, the cliffs have been retreating by 40 to 50 cm.each year – both endangering human lives and leading to billions of shekels in potential damages to real estate, heritage sites and infrastructure.The government has for several years been promoting legislation to handle the issue, first passing a resolution in 2010 and then approving a half-a-billion shekel coastal cliff protection program in April 2011. To facilitate the program, the Mediterranean Coastal Cliffs Preservation Government Company Ltd.was established in late 2013.Last month, the housing cabinet approved a national outline plan, developed by the Environmental Protection Ministry and the Interior Ministry, to protect the cliffs.This program, the ministry explained, will enable local authorities to issue expedited building permits for the construction of protective structures to reinforce areas in danger of collapsing.As far as the Ashkelon sands are concerned, in response to the Environmental Protection Ministry’s claims, the IEC said the company “attaches great importance to the protection of coastal cliffs.”“Throughout the years, the Environmental Protection Ministry has instructed the IEC to evacuate the sand into the shallow waters north of the [cooling] ponds,” IEC said.Once every few years, the firm performs digging works in the power station’s cooling ponds to ensure proper operation of the pools, prevent the penetration of sand into the cooling systems, and to make the anchorage of coal ships arriving to the docks easier, the IEC said. The company has a multi-year agreement with a contractor to perform the appropriate measures, depending on dumping permits from the ministry.The IEC said that sand accumulated at this plant this past winter and created an immediate need to remove it. This caused the company to file for the permit. Following the permit submission, the IEC became aware that the Mediterranean Coastal Cliffs Preservation Government Company now intends to use the excavated sand to feed into the coast, requiring new transport methods, the firm said.“Thus the IEC has already begun working with the Mediterranean Coastal Cliffs Preservation Government Company’s engineer to work out solutions for using excavated sand directly on the beach,” the IEC said. “At the same time, the company is preparing to implement new guidelines, through a procedure to change the tender conditions of the implementing contractor.”