The Beersheba team is the first-ever Israeli Team to become iGEM finalists competing against 259 groups from around the world. 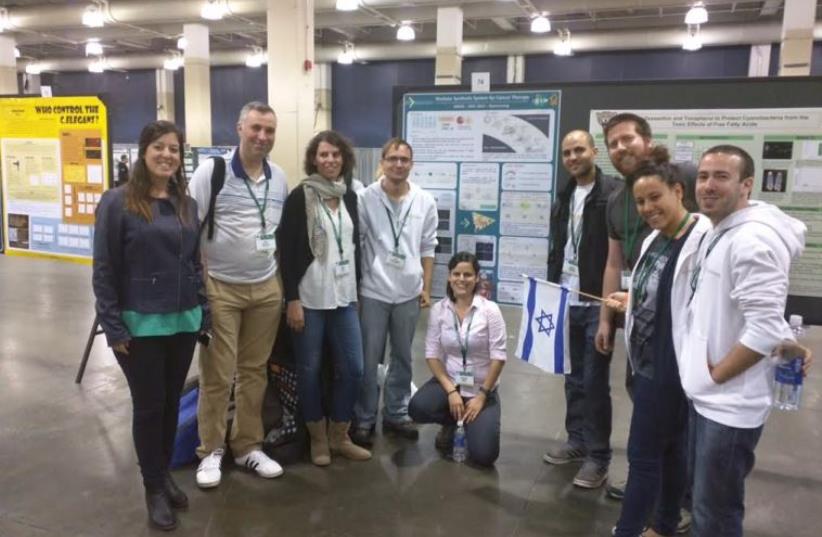 Ben-Gurion University student team at Boston’s International Genetically Engineered Machine Competition.
(photo credit: BEN GURION UNIVERSITY OF THE NEGEV)
Advertisement
A Ben-Gurion University of the Negev student team placed first in the health and medicine category for their “boomerang cancer therapy” project in the prestigious iGEM (International Genetically Engineered Machine) 2015 Giant Jamboree Competition.The Beersheba students are the first-ever Israeli team to become iGEM finalists, competing against 259 groups from around the world, BGU announced on Wednesday.The winners were announced at the awards gala on Monday at the Hynes Auditorium in Boston. IGEM is considered one of the most important ventures in the global sphere of science.Nearly 4,600 students competed last week in this year’s event. Their local experiences in a global community, said BGU, “impart unique perspectives in the field, especially as projects span a broad range across 15 different tracks – including health and medicine, energy, environment, food and nutrition, manufacturing, and others.”The BGU Student Team members, who are pursuing a diverse range of degrees, include Shai Duchin, Bar Gazit, Dafna Goldman, Shalev Goldfarb, Shoham Rigbi, Adi Stein, Vlad Shumeiko, and Ori Zelichov. Professor Smadar Cohen is the team leader and a member of BGU’s Avram and Stella Goldstein-Goren department of biotechnology engineering. In addition to Cohen, the team faculty advisers who accompanied the students, Dr. Emil Ruvinov and Dr. Efrat Forti, are from the same department.The BGU Boomerang project is based on advanced methods of genetic engineering and synthetic biology. It has many applications that rely on the special characteristics of cancer cells to identify and alter cells, as well as treat the disease at the molecular level.As a cancer therapy, Boomerang works as a modular system that recognizes cancer cells at a high level of specificity. It can disrupt genes essential for cancer survival or activate suicide genes so that the cancer or tumor kills itself. Boomerang can also produce color proteins for cancer cell detection so that the edges of a tumor are visible to ensure complete surgical removal. The name “Boomerang” mirrors the actions in which the synthetic system uses cancer cells’ own genetic alterations against them, the students explained.“Most treatments cannot distinguish precisely enough between cancer and healthy cells,” according to the BGU iGEM team website. “Low specificity means higher toxicity and a high rate of adverse effects. The BGU Boomerang system can be potentially designed according to unique characteristics of a patient’s tumor, paving the way to personalized medicine. We believe our strategy demonstrated in the winning prototype/proof-of-concept studies can change the approach to cancer treatments.”In addition to winning the grand prize in the graduate level Best Health and Medicine Project category, the BGU team was a first runner-up in the overall competition, and the first Israeli team to reach this level in iGEM. Lastly, the BGU team also won the Best New Basic Part Award for developing and submitting the best new functional DNA sequence to this year’s competition.“The university is so proud to have succeeded in this prestigious competition,” said Cohen. “Our success in the competition shows tremendous student dedication and excellent heterogeneous cross collaboration between students studying various subjects that include biotechnology, biology, economics, engineering, medicine, neuroscience and cognition, as well as political science.”Randy Rettberg, iGEM Foundation president, described the event as “Much more than an annual student competition.” He continued, saying, “The iGEM Giant Jamboree is also an international incubator for the synthetic biology industry that has spun out more than 20 competition projects into new startups.”Rettberg reminded the public that iGEM cares about the future generation.“With a spotlight on innovation, the iGEM Giant Jamboree also is about collaboration and giving back. IGEM competition teams submit biological parts from their projects to the Registry of Standard Biological Parts in a cycle that helps tomorrow’s iGEM teams and research labs.”