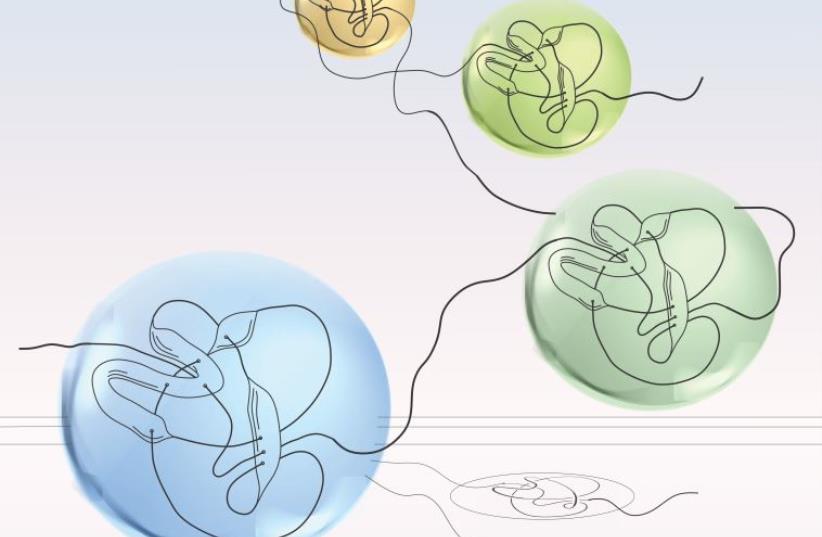 BGU's "talking knots."
(photo credit: BEN GURION UNIVERSITY OF THE NEGEV)
Advertisement
Researchers at Ben-Gurion University of the Negev, Dr. Daniel Moskovich and Dr.Avishy Carmi, have invented a new graphical language for information and computation based on quipus – or “talking knots” – an ancient Incan form of communication.The research was published under the title “Tangle Machines,” and ran as a cover story for the British scientific journal Proceedings of the Royal Society A.After studying the ancient communication method, the researchers wondered what ideas could be expressed using knots and tangled, colored pieces of string and they determined that colored, decorated tangles can express the fusion of information and the flow of computational processes in a compact and intrinsic way.The language, they said, not only expresses what could have been said before, but also provides tools to convey new ideas.Tangled strings are flexible and can be shifted like beads on an abacus; the action of moving strands mirrors the process of switching between different information flows to achieve the same goal but at different costs, the Beersheba-based researchers said.The best way to achieve that goal can be chosen from these flows, they said, adding that the principle could be used to design more efficient computational systems or to hide the workings of a secret computation.Moskovich and Carmi suggested that their work may pave the way for a new research field focused on the topology of information, dealing with the qualitative aspects of the theory of information.The Incas, the largest empire to ever rise in the Americas and the biggest in the world at the time, were considered a highly sophisticated civilization and were well known for their unique art and architecture. Even today, their legacy continues to impress visitors to Machu Picchu, an ancient Incan relic.Moskovich and Carmi are also members of the Center for Quantum Information Science and Technology, directed by Prof. Ron Folman. Proceedings of the Royal Society A is a descendant of the world’s oldest scientific journal, Philosophical Transactions of the Royal Society, which began publishing in 1665.