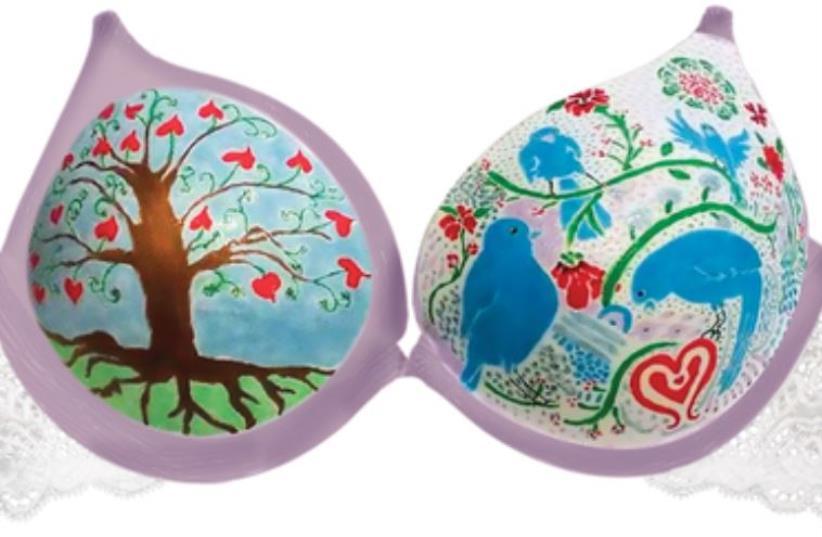 A bra decorated through Hadassah's The Uplift Project
(photo credit: AGNES GREGORIO, SR. GRAPHIC DESIGNER, HADASSAH/ JNS)
Advertisement
BRCA. It’s the gene mutation that gives Ashkenazi Jews a higher risk of breast cancer than the general population. But the women’s Zionist organization Hadassah is using three of BRCA’s letters—b, r, a—as a platform to help American women lead healthier lives and become more educated about breast cancer.Through Hadassah’s The Uplift Project, participants—among them breast cancer survivors and celebrities—decorate bras to draw attention to Breast Cancer Awareness Month, which is marked annually in the month of October. According to Mindy Bloom, Hadassah’s national vice president and The Uplift Project chair, the premise is a familiar one—you learn by doing, touching, and feeling. Involved since the inception of the project in 2014, Bloom says you can hear something all you want, and you can be told something. But to touch it and do it will make a lasting memory.“By talking about breast cancer, breast cancer research, all the wonderful work that is done by our fantastic researchers at Hadassah hospital [in Jerusalem] and all the major differences it has made to women in the world, this means a lot. But when you put it in their hands and you say, ‘Here, let’s take a bra and decorate it, and let’s tell your story through your decorations,’ this is even better,” Bloom tells JNS.org.At events of The Uplift Project, she says, participants “start decorating and begin to share their stories, which are amazing. Stories of survival.”Each bra that is decorated represents thousands of women saved through Hadassah’s breast cancer research and awareness programs. One recent research item posted on the organization’s website describes how Hadassah has done extensive research with the BRCA gene mutation, which significantly increases a woman’s risk of developing breast cancer. It was Hadassah that discovered at least a 10-times-greater frequency of the BRCA mutation among Ashkenazi Jewish women. In addition, Hadassah found a different mutation in the BRCA gene in Persian women.Marcie Natan, Haddassah’s national president, is a two-time survivor of breast cancer. In November 2013, Natan called out the New York Times for its failure to credit Hadassah’s contributions to breast cancer research.“In her important November 26 article, ‘In Israel, a Push to Screen for Cancer Gene Leaves Many Conflicted,’ Roni Caryn Rabin delves into a complicated subject; however she fails to fully give credit where credit is due,” Natan wrote in a letter to the editor. “In the article, Rabin mentions studies conducted by the International Journal of Cancer and the Gertner Institute for Epidemiology and Health Policy Research, but neglects to mention the admirable work done by other organizations like Hadassah Medical Organization. Rabin dutifully informs readers that 1 in 40 Ashkenazi Jewish women carry a harmful genetic mutation, compared to less than 1 in 100 women generally. While this statistic is indeed accurate, it is something that was uncovered by Hadassah in 1996.”Natan added, “Immediately following the discovery of BRCA1 and BRCA2, the inherited gene mutations that can show a predisposition to breast or ovarian cancer, the Hadassah Medical Organization (HMO) joined with researchers at the National Institutes of Health to publish the groundbreaking dominant genetic research on BRCA1 mutations in the Ashkenazi Jewish community. One of the findings was in fact that Ashkenazi women were much more likely than others to carry the BRCA mutation. And subsequently, HMO developed a new, easier blood test to detect the presence of these genes.”One source of significant public awareness about the BRCA gene mutations is the fact that actress Angelina Jolie has publicized the importance of being tested for breast cancer. In February 2013, Jolie underwent a preventive double mastectomy after learning she had an 87-percent risk of developing breast cancer due to a defective BRCA1 gene.In an article titled “My Medical Choice,” published in May 2013 in the New York Times, Jolie wrote, “I choose not to keep my story private because there are many women who do not know that they might be living under the shadow of cancer. It is my hope that they, too, will be able to get gene tested, and that if they have a high risk they, too, will know that they have strong options.”Bloom tells JNS.org that an increase in the public’s breast cancer awareness means that people are more willing to share their personal stories with the disease. “The Uplift Project’s programming gave [women] the environment in which they could share their stories,” she says.The project, says Bloom, is “a place to initiate the conversation.” “We’ve done other programs to increase awareness, including a program called Check It Out. This is a program that reaches out to high school kids. We go into high schools and talk about breast cancer, and they have the breast where you can feel the lump. It’s been amazing. I have friends in Richmond, Virginia, that have been doing this program for over a decade and they know they have helped the kids,” she says.Bloom recommends performing a self-exam for breast cancer. She points to Hadassah shower cards, which provide the following instructions: “Put the opposite arm up in the air and with the other hand check around that area, all around the entire area. If you feel something that isn’t right, then go get it checked. Also, we encourage women to live a healthy lifestyle. On our website (www.Hadassah.org) women can find details about our walking program called Every Step Counts.”“We’re so proud of The Uplift Project and of the women who participated in it,” Bloom says. “Outreach is so critical. The whole idea of Hadassah has always been that it’s a people organization. When you get people talking, you’ve got an organization. That’s exactly what Hadassah has done.”