Cracking the mystery of the avian egg shape

To unravel the mystery of egg shape, an international team of researchers used a multi-step, multidisciplinary process and applied tools from many fields of science and mathematics. 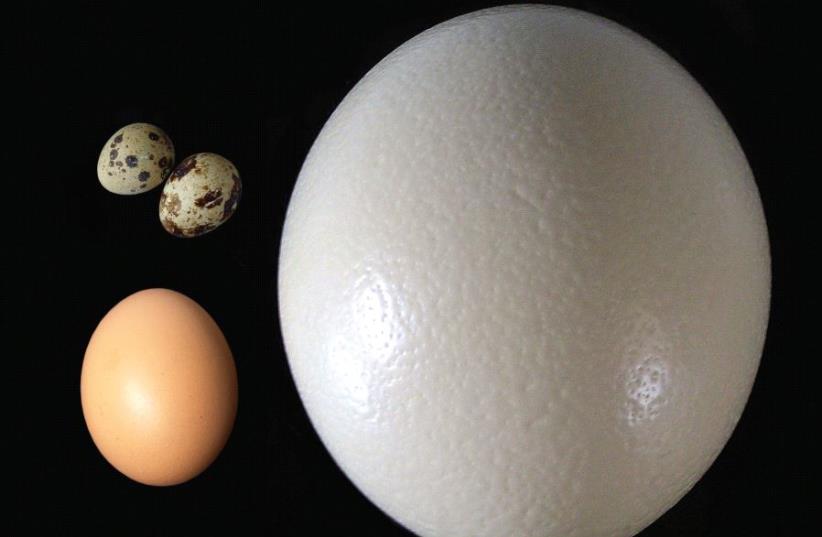 BIRDS TEND to lay more asymmetric and more elliptical eggs if they are better fliers. Size aside, can you guess which of these came from a quail, a chicken and an ostrich
(photo credit: Wikimedia Commons)
Advertisement
Which came first, birds’ ability to fly or the shape of their eggs?In fact, the shape of eggs – from ellipses in hummingbirds, spheres in owls, pointy ovoids in shorebirds and almost everything in between – has been found to be determined by flight ability, and it may be the egg’s soft membrane that determines the hard shell’s shape. That is the surprising finding of a new study in the journal Science.According to the research, in which an Israeli researcher participated, egg shape in birds is related to adaptations for efficient flight, and a mechanistic model reveals how different egg shapes may be formed.Avian egg shape has fascinated humans for millennia – even Aristotle wrote about it – but until now, there has been no answer to the simple question of why did different egg shapes evolved and how.Dr. Derya Akkaynak of the University of Haifa and Interuniversity Institute of Marine Sciences in Eilat was a member of the team that was headed by Dr. Mary Caswell Stoddard of Princeton University and included Dr. Joseph Tobias of Imperial College London, Dr. L. Mahadevan of Harvard University, Dr. Ee Hou Yong of Nanyang Technological University and Dr. Catherine Sheard of the University of Bristol.“In contrast to classic hypotheses, we discovered that flight may influence egg shape. Birds that are good fliers tend to lay asymmetric or elliptical eggs,” said Stoddard.  “In addition, we propose that the stretchy egg membrane, not the hard shell, is responsible for generating the diversity of egg shapes we see in nature.”To unravel the mystery of egg shape, an international team of researchers used a multi-step, multidisciplinary process and applied tools from computer science, comparative biology, mathematics and biophysics. First, the team used photographs to analyze the shapes of nearly 50,000 eggs representing 1,400 species. The eggs came from across the globe and were largely collected by naturalists in the late 19th and early 20th centuries.By combining the power of high-throughput digital image analysis with the wealth of data in the museum egg collection, the team was able to map the world of egg shapes. The team then developed a biophysical model to explain how processes in the bird’s oviduct might generate different egg shapes. They started with the simple observation that an egg’s shape is not determined by the shell; dissolve away the calcified shell, and the shell-less, membrane-encased egg still retains its shape.“By adjusting two basic properties – changes in the thickness of the egg membrane as a function of location, and a pressure jump across the membrane – we show that our model can produce a wide variety of egg shapes, encompassing the entire range of observations,” said Mahadevan.The team used an evolutionary framework to test hypotheses about egg shape. Using a recently constructed phylogeny, or family tree, of birds, the researchers compared egg shapes across different bird lineages. In this analysis, they included details about nest type and location, clutch size, diet and flight ability. “Variation across species in the size and shape of their eggs is not simply random but is instead related to differences in ecology, particularly the extent to which each species is designed for strong and streamlined flight,” said Tobias.The analysis revealed that birds tend to lay eggs that are more asymmetric and more elliptical if they are better fliers. The researchers suggest that as birds’ bodies became adapted for powered flight, this resulted in morphological changes like reduced body size and a reduced abdominal cavity.Birds may then have had a packaging problem, needing to fit a large volume into an egg (for healthy chick development) while still maintaining a sleek body for flight. They likely solved this by laying eggs that were pointier and more elliptical, which increases egg volume without increasing the egg’s maximum width. The discovery that morphological constraints associated with flight may contribute to egg shape challenges the conventional wisdom that egg shape is largely influenced by clutch size or nest location.