The contestants have just three minutes to discuss before a panel of judges in a unique and interesting way their favorite subject in science, technology, engineering, mathematics or medicine. 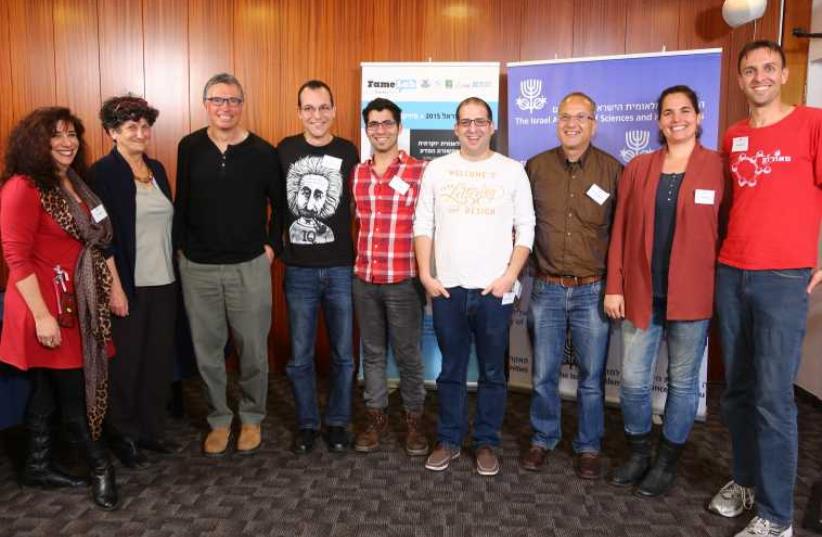 Finalist to compete in Britain’s FameLab competition explaining science in three minutes will be chosen on Thursday
(photo credit: ISRAEL ACADEMY OF SCIENCES AND THE ARTS)
Advertisement
Five young physicists will on Thursday take part in the finals in Tel Aviv for FameLab-Israel, a competition whose winner will represent Israel in the British Council’s prestigious international competition in June.The contestants have just three minutes to discuss before a panel of judges in a unique and interesting way their favorite subject in science, technology, engineering, mathematics or medicine.It is held annually as part of the Cheltenham Science Festival.The international contest was launched in 2005 and is now held in 25 countries across Europe, Asia, Africa and North America, including Israel. A monetary prize is given to the winner. The Israeli finalists preparing for Thursday’s local competition are; Ben Ohayon, Avital Dery, Amir Weizman,Tal Lev-Or and Elad Schleifer. All five have bachelor’s or master’s degrees in physics and participated last month in a unique master class under the direction of renowned British expert Malcolm Love and experts from Israel.The competition this year marks the 50th anniversary of Geneva’s CERN particle accelerator facility of which Israel’s has become a full partner.The local competition is being organized by the Israel Academy of Sciences and the Arts, together with HEMDA (the Tel Aviv Science Education Center) and the I-Core center for excellence in physics.The aim is to encourage and train young scientists to combine communication abilities with a public career in science and technology.Ohayon, a 28-year-old Jerusalemite, is a doctoral student at the Hebrew University’s Racah Institute of Physics, who has been researching the fundamental forces of nature and the building blocks of matter, elementary particles and the ways in which forces and particles interact with each other. The building blocks can be studied by creating explosions with tremendous energy and controlled measurement of flying debris from the crash using the Large Hadron Collider in Geneva. Ohayon, however, does it differently with precisely controlled experiments at low temperatures created by laser cooling.Dery, 23, is a doctoral student in physics at the Weizmann Institute of Science in Rehovot and lives in Tel Aviv. She is investigating elementary particles and is a singer of classical music and performs across the country. Three years ago, the Higgs-Boson Particle (or “God’s Particle”) was discovered after efforts for 50 years to understand the mechanism of particles in the early days of the universe. Dery’s research group is examining possible models to answer these fundamental questions and understand the implications.Weizman, 33, has a master’s degree in materials engineering from Ben-Gurion University of the Negev and who studies metals and smart materials for use in the healthcare industry. He works at Microtech Medical Technologies to develop sensors implanted in blood vessels to measure blood pressure using advanced ultrasound technology. This could be used for early detection of liver, heart and lung diseases, as these can cause undetected rises in blood pressure.Lev-Or is a doctoral student in astrophysics at Tel Aviv University looking into questions such as whether life is possible on other planets in the Milky Way. Born in Moscow and living on Modi’in, he is married with two children. He is the grandson and great-grandson of physics teachers, including one of the pioneers of space medicine in the former Soviet Union.Schleifer, 28, has a master’s degree in physics specializing in nanoscience and nanotechnology at HU and investigating acceleration resulting from the interaction of protons with a powerful laser plasma.He also teaches undergraduate physics students.
Sign up for the Health & Wellness newsletter >>