The high-school students came from the Upper Galilee and became trapped after intense rain and hail. 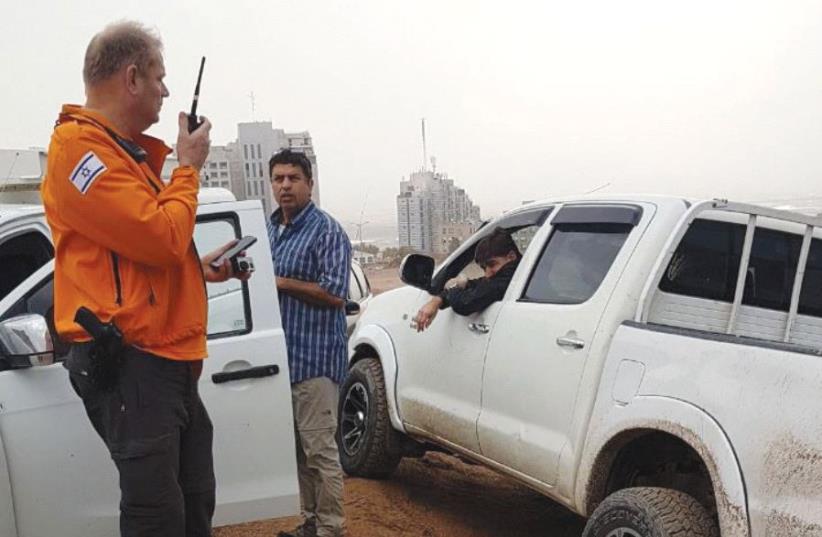 POLICE RESCUE units enter the flooded area of Eilat yesterday
(photo credit: EILAT POLICE)
Advertisement
A police rescue unit came to the aid of 130 teenage hikers who were trapped in their campsites on Wednesday morning near Eilat after heavy rains caused flooding.The high-school students came from the Upper Galilee and became trapped after intense rain and hail.None of the teens sustained injuries and there was “no fear for their lives” in the incident, according to a statement by Eilat District Police.However, they were found soaking wet.“When we heard the strong rain we understood that some people may be in trouble because of the flooding so we went out to see the places that were in danger and we took them out,” Shraga Green, commander of the police rescue unit in the Red Sea city, told The Jerusalem Post. “Then we got a notification from group of 130 students who were trapped.”Green said the rescue effort was a combination of police forces, the Israel Electric Corporation and volunteers who came with jeeps to remove the teenagers from the flooded area.“I organized every vehicle and four-wheel drive vehicle to help get [the students] out of the flooded area to road,” Green said. “We didn’t have enough jeeps so we asked on Facebook for anyone that had the right car to come.”The students were on an annual camping trip on the Israel Trail in remembrance of Israel’s fallen soldiers.“We knew there could be a trickle at night, but there was no expectation that the showers would be so powerful,” said Raya Afner, who organized the trip and spoke with Walla News.“We settled in the high part of the valley, but at 4 a.m. suddenly hail the size of eggs began to fall and torrential rain came even to the high part of the valley,” she said.Meanwhile, Green also conducted a rescue operation of another group of around 300 high school students who were stranded in a flooded parking lot north of Eilat. The storm also caused the temporary closure of the city’s airport in the morning, while workers cleared the runways of floodwater.“Everything is good now. The sun is shining,” Green said on Wednesday afternoon once the storm had subsided.