Given Imaging’s ‘Pillcam’ available at Rambam for colorectal cancer screening 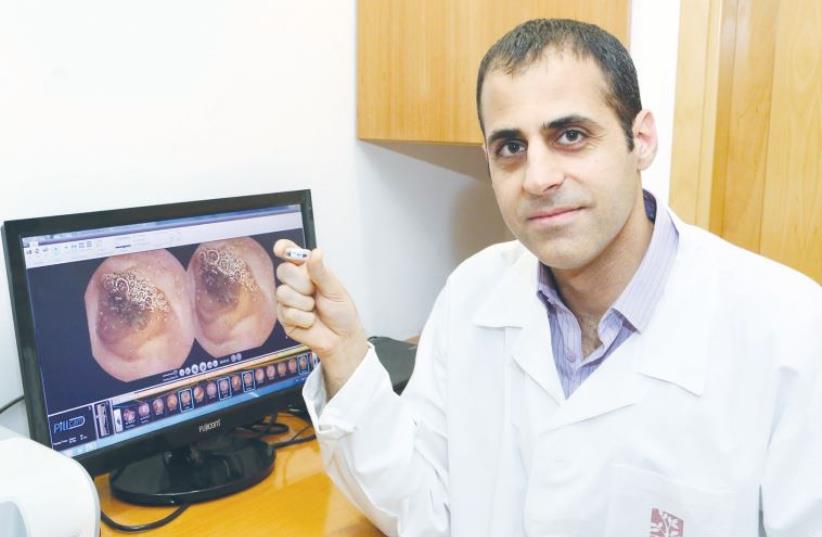 DR. ITAI MAZA shows off Given Imaging’s colorectal cancer Pillcam
(photo credit: RAMBAM HOSPITAL SPOKESMAN)
Advertisement
A new version of the Pillcam – a 3-cm.- long miniature camera in a pill used to screen colorectal cancer in “healthy” people with no symptoms such as anemia or gastrointestinal bleeding – is now available at Haifa’s Rambam Medical Center as part of the national health basket provided by the four health funds.Pillcam was invented by Given Imaging in Yokne’am. In March 2014 Given Imaging was acquired by Dublin-based Covidien.Only a fifth of people over the age of 50 go for a periodic colonoscopy, an invasive technology in which an endoscope containing a tiny video camera is threaded through the bowel to detect a precancerous polyp or – when it is too late to catch a polyp – an actual tumor. It is not painful when a mild anesthetic is given, but preparation for cleaning the bowel is unpleasant, and many people are ashamed to undergo it, even though the procedure could save their lives.Colorectal cancer is one of the most common and lethal in the Western world, where early detection of the disease can significantly increase the percentage of survival. According to recent epidemiological data, every year more than 900 Israelis diagnosed with early- stage colon cancer recover and get their lives back. The most commonly used but not fully accurate screening test is the fecal occult blood test in which a health fund lab looks for small amounts of blood in a stool sample.The most popular use of the Pillcam has been to detect cancer in the small intestine. The new version, which was developed in Yokne’am with Rambam researchers, is suited to do the same in the large intestine and rectum.After the capsule is swallowed, it takes nine hours for it to emerge from the rectum, after which the images are assessed for the presence of a polyp or tumor. The Pillcam test is designed for those who are not able to complete colonoscopy despite good preparation, are at high risk for anesthetics, or have cardiac or respiratory problems. The second-generation is in clinical use so far only at the Haifa medical center. The new capsule was recently approved for clinical use by the US Food and Drug Administration, and the Health Ministry.Dr. Itai Maza, a senior Rambam gastroenterologist who is responsible for using the new capsule at his hospital and who was a member of the team that deciphered the results for Given Imaging during the capsule’s development for the highly popular small intestine screening tool, explained the advanced medical technology. In the coming years, he said, "the use of the colorectal capsule will become commonplace."In the hospital, the gastro team diagnoses the video of the colon broadcast by the tiny camera, looking for pathological findings. The capsule cannot be used, however, if imaging tests indicate a narrowing or blockage in the gastrointestinal tract.“March is a Colon Cancer Awareness Month,” the Rambam gastroenterologist concluded. “Today, there are many options to catch the cancer in its early stages, and medical technology continues to evolve and offer more solutions. No matter which test you choose. If you passed the age of 50, go to get tested. It may save your life.”