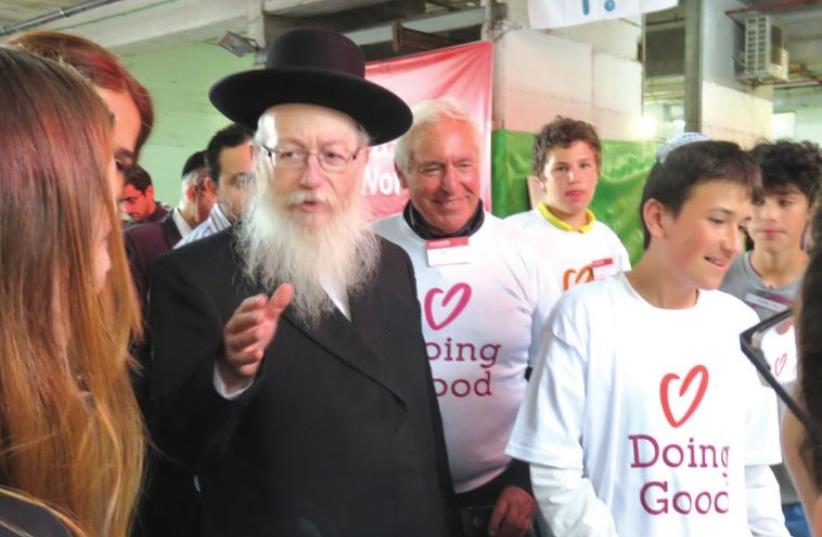 ‘MAKE-A-THON’ PARTICIPANTS develop projects to help disabled youth at the capital’s Alyn Orthopedic Hospital and Rehabilitation Center
(photo credit: JUDY SIEGEL-ITZKOVICH)
Advertisement
To do a good deed, one doesn’t have to give charity, paint a poor person’s apartment, pick up garbage or walk an old lady across the street.One can also hear a disabled child’s wish for a solution to a problem and design and build it during a 12-hour “Make-athon.”That’s how Tikkun Olam Makers, the local branch of a global organization, helps others: by spending National Good Deeds Day on Tuesday at Jerusalem’s Alyn Orthopedic Hospital and Rehabilitation Center. Some 90 designers, engineers, developers and even high school pupils gathered in the hospital’s covered parking lot, working in 11 teams to create and build solutions, some using 3-D printers donated by a Givatayim firm.Numerous companies such as Intel and Cisco and academic institutions like Jerusalem College of Technology and Hadassah Academic College participated, with representatives and others as well who helped them.Health Minister Ya’acov Litzman, who had never seen a 3-D printer in action before, spent an hour viewing the projects and talking to “Makers.”The hospital’s Zvi Ginossar said, “The short-term aim was to make the children’s wishes come true, but the long-term target is to create an innovation center to develop solutions for disabled children, and eventually, even adults with Parkinson’s and other diseases.”A child who suffered from such bad tremors that he couldn’t eat soup asked for help. A team developed a comfortable brace of cloth, straps and stiffening material to keep his hand steady.A teen who lost all his fingers to frostbite in Nepal asked for a way to keep him occupied with a PlayStation console and another with hand problems wanted to play X-Box video games, two teams, including seventh-grader Yonatan Schechter, designed solutions for them. When an Alyn child liked the electronic game Simon Says but couldn’t play because of paralysis, a team created a device that allowed her to play by moving only her head.Avi Follman, the manager of a metal plant in Haifa who has for years participated in Alyn’s Wheels of Love fund-raising campaign, came to Jerusalem for the day to design a back brace to help a severely disabled girl sit straight in her wheelchair.Two teams found different solutions for one girl who has a dysfunctional arm that she cannot use to make a ponytail for herself without great effort. Eli Segal invented a helmet-like device set on a fixed pole that uses a blower to push her long hair into a hole and a cone that snaps a rubber band to make a ponytail.Other projects were designing a “grabber” device for objects using one’s mouth instead of the hands, a plastic smartphone holder for wheelchairs and a page-turning device for a severely disabled child.Eli Banai asked to create an active game of lights for playing in a swimming pool, designed floating pieces with lights that have to be collected according to even numbers and other criteria, thus constituting a health-promoting and fun game.“This is new and amazing,” Litzman said enthusiastically, dropping his usual publicly stern countenance. “This project of good deeds is a refreshing innovation. I am hopeful that it will lead to a real advance for disabled children and adults, and I want to see what will come of it a year from now.”In the swing of things, he related to the “Makers” that he himself “did a good deed today”: “I persuaded a hospital to keep for another two weeks a little girl who suddenly became very disabled and would have nowhere else to go until the end of renovations in her home.”