Critical to the NIS 260m. program approved on Thursday night is the reduction of air pollution from 80,000 aging diesel cars on the road, the ministry said. 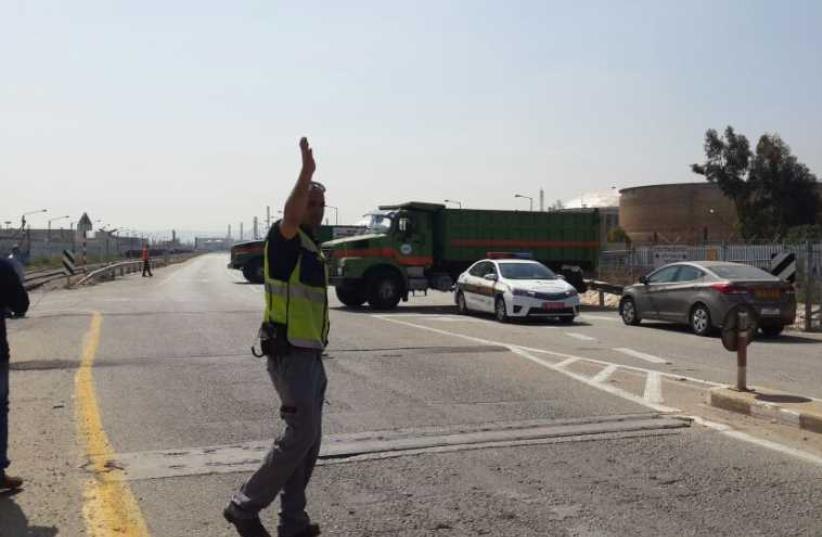 Municipal trucks block entrance to factories linked to air pollution.
(photo credit: Courtesy)
Advertisement
In line with global efforts to curb greenhouse gas emissions, the government authorized a NIS 260 million air pollution reduction program on Thursday night as part of the country’s 2017-18 budget.Following this latest approval, the Environmental Protection Ministry’s total resources for combating air pollution will now amount to NIS 1.4 billion, an amount that Environmental Protection Minister Ze’ev Elkin described as “unprecedented.”Among the key elements of the newest two-year plan, which focuses on transportation, are investments toward eliminating diesel trucks, subsidies for particulate filter installations and grants encouraging vehicle scrapping. According to the ministry, implementing the program will prevent hundreds of premature deaths annually and encourage economic growth.“Air pollution is one of the most difficult problems in Israel,” said Elkin. “Israeli citizens deserve clean air. I thank the finance minister [Moshe Kahlon] for his willingness to provide support that will enable us to enact for the first time in Israel’s history a revolutionary program for the significant reduction of air pollution from transportation – bringing the state’s investment in the area of reducing air pollution in the coming years to an unprecedented amount of NIS 1.4b.”“We will continue to work toward reducing pollution and risks to residents of the country,” Elkin added.Critical to the NIS 260m. program approved on Thursday night is the reduction of air pollution from 80,000 aging diesel cars on the road, the ministry said.The owners of such vehicles will be able to dispose of them and receive a government grant in return. For others, the government will offer subsidies to install particulate filters that reduce about 97 percent of the contamination emanating from these heavily polluting vehicles.Although diesel trucks and buses make up only 20% of kilometers traveled in Israel, they are responsible for 80% of the country’s vehicular air pollution, according to the ministry.The budget will also help establish “clean air zones” within the boundaries of cities, with the first expected to be established in Haifa in January 2017, program information said.The budget approval Thursday night came eight months after December’s United Nations Conference on Climate Change – also known as the Conference of Parties (COP-21) – during which nearly 200 countries, including Israel, agreed to adopt programs for curbing greenhouse gas emissions. Prior to the conference, all participant nations submitted their Intended National Determined Contribution plans to the United Nations Framework Convention on Climate Change, the terms of which varied for each country.Israel’s targets included a 25% reduction of its 2005 greenhouse gas emissions by 2030 – limiting residents to 7.7 tons of carbon dioxide per capita. The government’s plan also involved making renewable energy resources responsible for 17% of the country’s electricity usage by 2030, as well as reducing overall electricity consumption by the same percentage. The targets also included a 20% decrease in private vehicle usage.