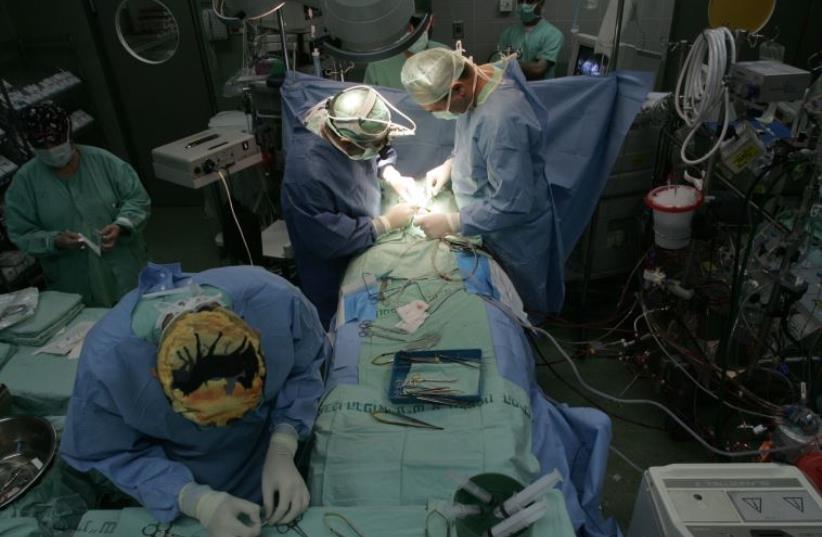 Israeli doctors perform heart surgery on a baby from Gaza, at Wolfson Hospital near Tel Aviv
(photo credit: REUTERS)
Advertisement
In a breakthrough that could change the future of pacemakers, researchers from the Technion-Israel Institute of Technology have used mechanical stimulation to “train” cardiac cells to beat at a given rate.The team’s findings, published this week in Nature Physics, also demonstrate for the first time that direct physical contact with the cardiac cells is not required to synchronize their beating. As long as the cardiac cells are in the tissue being mechanically stimulated, they are trained by the stimulation, with long-lasting effects that persist even after it is stopped.“Cell-cell communication is essential for growth, development and function,” explains Prof. Shelly Tzlil of the mechanical engineering faculty.“We have shown that cells are able to communicate with each other mechanically by responding to deformations created by their neighbors. The range of mechanical communication is greater than that of electrical and chemical interactions. Another significant discovery is that the duration of cell pacing is greater when the stimulus is mechanical, indicating that mechanical communication induces long-term alterations within the cell.”The stimulation was applied by an artificial “mechanical cell,” consisting of a tiny probe that generated periodic deformations in the underlying cardiac tissue. The deformations mimicked those generated by a beating cardiac cell that was also in the tissue. After a brief 10-minute training period, the cardiac cell synchronized its beating rate with the mechanical cell. Furthermore, the cardiac cell maintained the induced beating rate for more than an hour after mechanical stimulation was stopped.“In this study, we show that an isolated cardiac cell can be trained to beat at a given frequency by mechanically stimulating the underlying substrate,” said Tzlil.“Mechanical communication plays an important role in cardiac physiology and is essential for converting electrical pacing into synchronized beating. Impaired mechanical communication will lead to arrhythmias even when electrical conduction is working properly. The medical implication is that adding mechanical elements to electrical pacemakers will significantly improve their efficiency.”MICROFIBER PAD HELPS DIAGNOSE, TREAT URINARY INFECTIONS Urinary tract infection is a common medical condition affecting as many as 10 million people a year in the US alone. The infection is difficult to diagnose in infants and elderly patients, as the symptoms are vague and non-specific.Diagnosis is complicated by difficulties in collecting sterile urine samples from those most prone to such infections, including women, young children and the bedridden.While sterile urine samples can be readily collected in adults using simple plastic cups, urine collections in infants and bedridden patients relies on adhesive plastic bags that are routinely contaminated by skin-borne bacteria or fecal matter.“Contamination is so common that doctors often needlessly prescribe broad-spectrum antibiotics prophylactically,” increasing the risk of developing antibiotic-resistant bacteria,” said Dr. Amir Orlev.He was part of a multidisciplinary group that set out solve this problem, as part of the Hebrew University’s and Hadassah University Medical Center’s BioDesign: Medical Innovation program. He partnered with engineering students Eliezer Keinan and Nitzan Guberman, who developed UCap, a non-invasive microfiber urine-collection pad.The innovative pad contains bundles of hollow glass microfibers that quickly draw urine samples from absorptive pads in seconds, while the remainder of the urine is absorbed by a polymer matrix.As the urine is rapidly collected, cross-contamination of the urine sample by contact with skin or fecal matter is prevented. The low-cost but highly effective solution can save time and money in the collection of sterile samples from patients prone to such infections.USE SMALL PLATES TO LOSE WEIGHT One of the solutions for tackling the growing problem of obesity is quite simple – eat from smaller plates. In the past, examinations of the issue were not conclusive. But a new meta-analysis in the Journal of the Association for Consumer Research, 56 previous studies on the issue of small plates found that indeed, smaller plates of food can help reduce consumption under specific conditions.The various studies examined whether smaller plates reduce consumption for a wide variety of conditions: food type (snack foods, popcorn, ice-cream, breakfast cereal, rice, vegetables, fruit, etc.), plate-type (bowls vs. plates, serving platter vs plate from which the food is consumed), portion-size (fixed amount of food served, amount varied in line with the plate-size, or self-served portions) and setting (consumers invited to a food laboratory vs unaware consumers in natural settings such as a buffet).Combining all the studies showed that halving the plate size led to a 30 percent reduction in amount of food consumed on average. In the case of plates, reducing the diameter by 30% halves the area of the plate and reduces consumption by 30%. The research found two important factors that amplify the effectiveness of small plates in reducing consumption – that smaller plates reduce consumption best if diners serve themselves and if consumers are unaware that their consumption is being monitored. This helps explain why so many studies conducted in food laboratories have not found an effect of plate-size on consumption.The findings of this research show that simply switching to smaller plates can help curb overeating among individuals in situations where they serve themselves such as at the home dinner table or at a buffet. “Just changing to smaller plates at home can help reduce how much you serve yourself and how much you eat,” said lead author Natalina Zlatevska of Bond University in Australia.
Sign up for the Health & Wellness newsletter >>