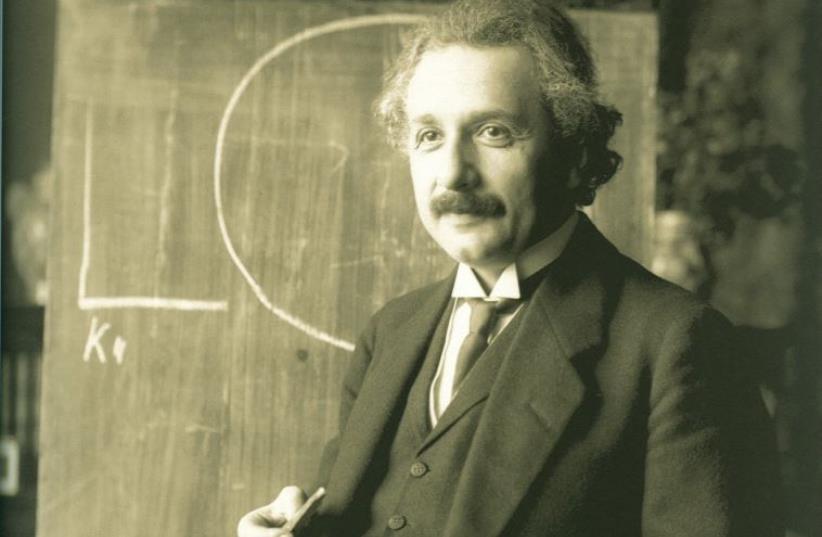 Albert Einstein during a lecture in Vienna in 1921, six years after the scientist announced the completion of his General Theory of Relativity
(photo credit: Wikimedia Commons)
Advertisement
The Hebrew University of Jerusalem and the Smithsonian Institution established a collaboration between the Smithsonian Science Education Center and Hebrew University’s Einstein Foundation. The broad initiative encompasses several projects that celebrate Albert Einstein’s legacy, promote peace and advocate for greater education in science, technology, engineering, and mathematics (collectively known as “STEM”).The collaboration was launched with the signing of a May 16 memorandum of understanding between the two institutions at the Smithsonian Castle on the National Mall in Washington DC.The foundation draws on the memory of Einstein to inspire scientific imagination and creativity.Signing the agreement were secretary David Skorton of the Smithsonian and Hebrew University president Prof. Menahem Ben-Sasson.Speakers and guests included Israeli Ambassador to the US Ron Dermer and leaders of Canadian Friends of the Hebrew University of Jerusalem and American Friends of The Hebrew University.“The Smithsonian has extensive resources in talent, platforms and knowledge base, making it the perfect partner for The Hebrew University and the Albert Einstein Foundation,” said Ben-Sasson.“We are confident this collaboration will motivate a new generation to be our future leaders in STEM.”“Together, the Smithsonian and the Hebrew University have more than 250 years of experience in research, exploration, education and discovery,” said Skorton. “I see a bright future for this partnership.Many scientists, scholars, students, teachers and parents will benefit.”As co-founder of the Hebrew University almost a century ago, Einstein left his entire estate and intellectual legacy to the institution, including more than 80,000 documents related to his work.The Albert Einstein Foundation will use the archives, exclusive to the University, along with the Smithsonian Institution’s resources to further honor his vision.The foundation will administer and promote a number of projects tied to the centennial of Einstein’s Theory of General Relativity and the search for new leaders in STEM, including a gala dinner event, a 3D book, and a STEM Summit.The Smithsonian Institution will host the “dinner of the century,” a gathering of inspirational leaders from the sciences and humanities, on September 9, 2017.The dinner will serve as the publication launch of a unique 3D printed book entitled Genius: 100 Visions of the Future, designed by renowned Israeli artist Ron Arad, which showcases the wisdom and vision of 100 of the greatest icons and leaders of our time.The global STEM Summit the following day will showcase innovation and scientific work from Hebrew University and the Smithsonian Institution and allow participants access to leading minds and innovators in their respective fields.
Sign up for the Health & Wellness newsletter >>