Muhammed Jabari was crushed while hanging out of a car in celebration after he passed his matriculation exams. 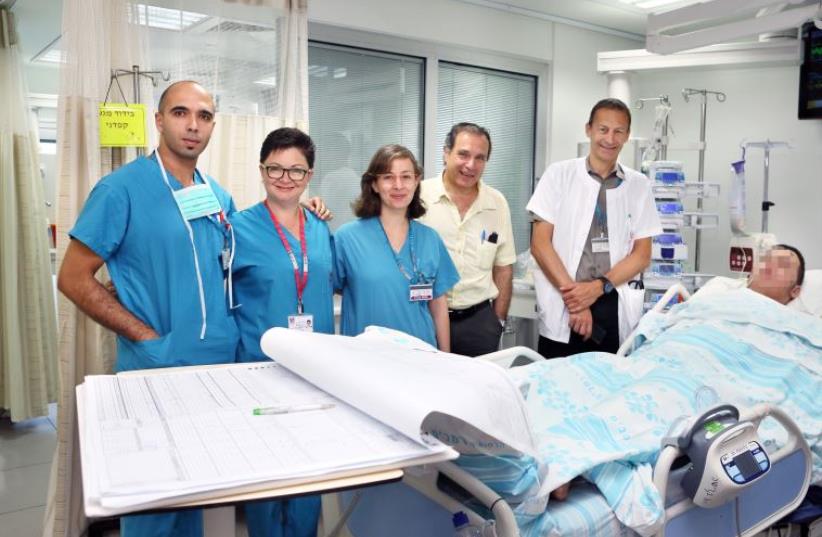 Prof. Bolotin (R) and team treating Palestinian team at Rambam Medical Center
(photo credit: COURTESY RAMBAM MEDICAL CENTER)
Advertisement
Doctors at Haifa’s Rambam Medical Center managed to save the life of an 18-year-old Hebron resident whose upper body was crushed when he leaned out the window of a car while celebrating his high school graduation last month.After hearing that he had passed all his matriculation exams, Muhammad Jabari drove with his friends with his chest and head outside the car. When the driver reached a sharp turn, he was squashed.He was rushed to the Hebron hospital in serious condition. When doctors managed to stabilize his condition, he was transferred to the intensive care unit at Augusta Victoria Hospital on Mount Scopus, where he was ventilated and anesthetized for a few days. After he was able to breathe on his own, however, his condition took a turn for the worse. Due to serious damage to his lungs, he could not be respirated again.The only way to save him was to attach him to an extracorporeal membrane oxygenation (ECMO) machine, which can support heart and lung functions for several days and enable the vital organs to recover. Dr. Abed Al-Rauf Biya, a senior physician in Augusta Victoria’s intensive care unit, contacted Dr. Zvi Adler, a leading cardiothoracic surgeon at Rambam.A few weeks prior, Rambam doctors had traveled to Jerusalem to attach a patient to an ECMO. This led the local doctor to think it would save the Hebron teen as well.After experts studied the case and cut through the red tape, approval was given for the use of the machine on Friday night, and an ambulance rushed from Haifa to eastern Jerusalem carrying the machine along with a medical team to operate it.Adler, Rambam resident Dr. Zvi Peled, and ECMO technicians Rami Heizler and Ya’acov Kasbury arrived and connected the teen to the machine. He was then transferred for continued treatment to Rambam.A few days later, Jabari showed signs of recovery, regaining consciousness and being able to speak to family and doctors. “His condition upon arrival was not simple,” said Adler. “He suffered from multiple injuries, and the artificial respiration turned more aggressive. He was balanced between life and death, but the machine allowed his lungs to rest.”A little more than two weeks since coming to Haifa, he is out of danger. “Due to his young age, we expect him to return to a normal life,” said Associate Prof. Gil Bolotin, director of the cardiothoracic surgery department at the hospital. “He will need several more operations to cope with the accident, but we are very optimistic about his future.”As there is no ECMO machine in every hospital, Rambam lends its machine to other institutions when needed.
Sign up for the Health & Wellness newsletter >>