Until the new study, there have been inconsistent results in research of the psychological aftermath of the Holocaust. 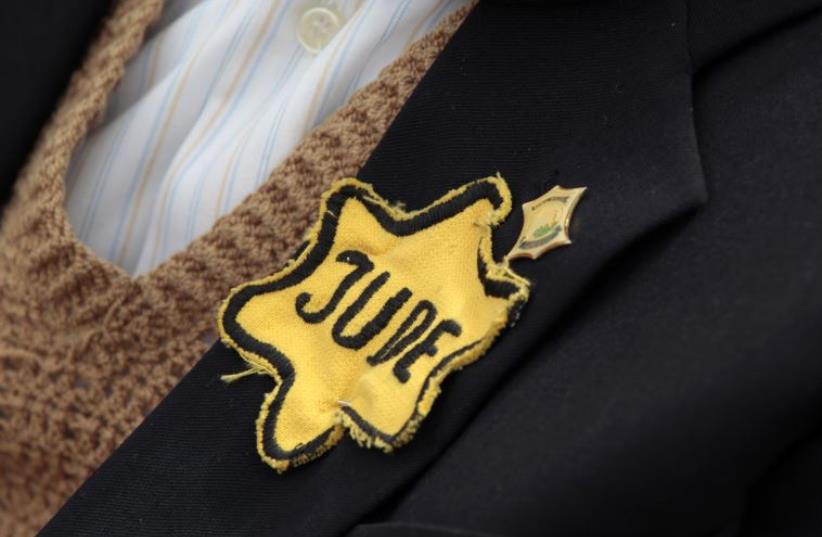 Polish born Mordechai Fox, an 89-year-old Holocaust survivor, wears a yellow Star of David on his jacket during a ceremony marking Holocaust Remembrance Day
(photo credit: REUTERS)
Advertisement
Women who fled to Palestine during the Holocaust were 4.6 times more likely to commit suicide than those who came before World War II, according to new historical/ medical research at the University of Haifa.“These findings may be attributed to the mechanisms of directly witnessing the multiple maximal adversities to the most important people in their lives, while they themselves fled in the knowledge of what was happening to their relatives, their friends, colleagues and their communities,” said lead researcher Prof. Stephen Levine.The study, just published in the journal PLOS ONE, showed no significant difference in the likelihood of suicide between those who were in Europe throughout the entire Holocaust period and subsequently immigrated to Israel compared to those immigrants who reached the country before the Holocaust began.Until the new study, there have been inconsistent results in research of the psychological aftermath of the Holocaust. One set of studies has shown that Holocaust survivors managed to develop resilient mechanisms and therefore their risk to developing morbidity were lower or equal to the general population. Another set of studies has shown that survivors emerged from the Holocaust with vulnerabilities.The current effort sought to examine the chances of survivors’ committing suicide – a subject not fully examined until now. The study was conducted by Levine and Dr. Itzhak Levav from the community mental health department of the University of Haifa, as well as Inna Pugachova, Yifat Becher and Rinat Yoffe from the information and evaluation department of the Health Ministry.The study, funded by the Claims Conference and the Israel Science Foundation, was based on 220,665 Jews who immigrated to Israel up until 1966. The study population was divided into three main groups – those who experienced the entire Holocaust and the periods of anti-Semitism which preceded it; refugees who partially experienced the Holocaust period yet managed to flee to Mandatory Palestine while it was still ongoing; and persons who immigrated before the start of Nazi anti-Semitic persecutions in their country of origin, yet who likely had family and social ties to people who were exposed to the Holocaust.Initially, the study results highlighted no statistically significant differences in suicide among members of the group who experienced the entire period of the Holocaust compared to members of the group that immigrated to Israel before it began. However a different set of results were found when the group of refugees that immigrated to prestate Israel during the Holocaust 1.7 times more likely to commit suicide than those who immigrated before the beginning of the Holocaust.The researchers sought to examine whether the age at which a person was initially exposed to the Holocaust had an impact on the chances of suicide, regardless of whether the individual experienced the entire period of the Holocaust in Europe or immigrated while the Holocaust was ongoing.Women who were initially exposed to the Holocaust above the age of 13 had a 2.4 times greater suicide risk. Men initially exposed aged one to two years old were less likely to commit suicide than those not exposed to the Holocaust.“The results point to a different aftermath for males and female survivors.Among males, the results likely indicate that mechanisms of resilience and natural selection processes moderated the suicide risk.“Among female refugees, the insight and guilt that they escaped a cruel fate that annihilated their families, friends, colleagues and even communities elevated the risk of suicide” said Levine.
Sign up for the Health & Wellness newsletter >>