Three of the five in the Israeli delegation brought home prizes. 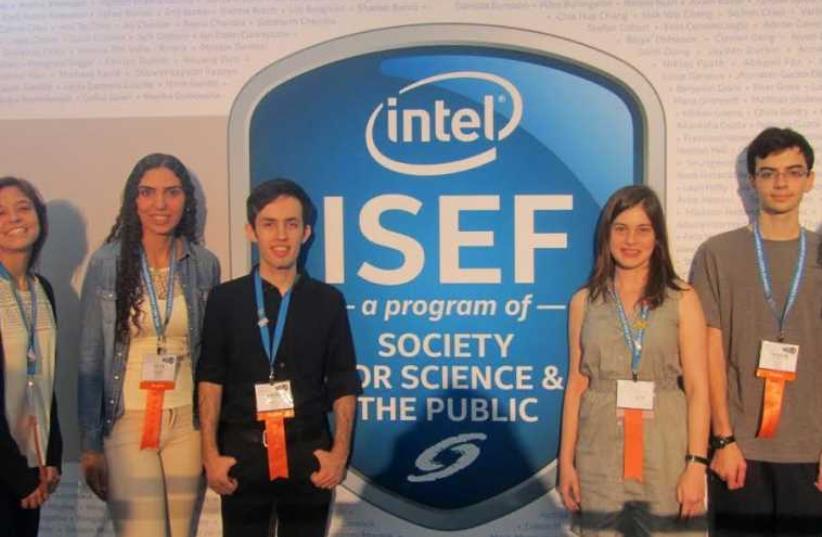 Intel young scientists
(photo credit: RITA GILAD FOR BLOOMFIELD SCIENCE MUSEUM)
Advertisement
The winning team of Intel-Israel’s Young Scientist Competition held at Jerusalem’s Bloomfield Science Museum a few weeks ago came back from the Intel International Science and Engineering Fair (Intel ISEF) in Pittsburgh with more medals.More than 1,700 teenagers from 70 countries participated in the contest, which is the world’s largest international pre-college science competition.Betty Shamayev and Mai Shushan of Kiryat Tivon, near Haifa, won third place in the biomedical and medical sciences category for their project on reducing blood flow and pressure inside medical casts. An air sac is used to replace the soft layer in the plaster casts, and a senor and pump are included to control the air pressure at all times.The girls are in the process of having a patent registered on their infection.Noa Eden took fourth place in the cellular and molecular biology category with her project on the role of Factor Pax 6 in protecting the identify of adult beta cells in the pancreas. This is the first step in the effort to find an alternative way to produce beta cells to produce insulin in the body and, perhaps, to bring about a cure to type I diabetes.Thus three of the five in the Israeli delegation brought home prizes.Bella Abrahams, deputy director-general for foreign relations of Intel-Israel, said she was excited by the success of the team. She called on the talented high school pupils to continue to study engineering and sciences at the university level and eventually join the hi-tech sector.Another team among the Jerusalem contest winners will go in September to Milan to represent Israel in a European young scientist competition.