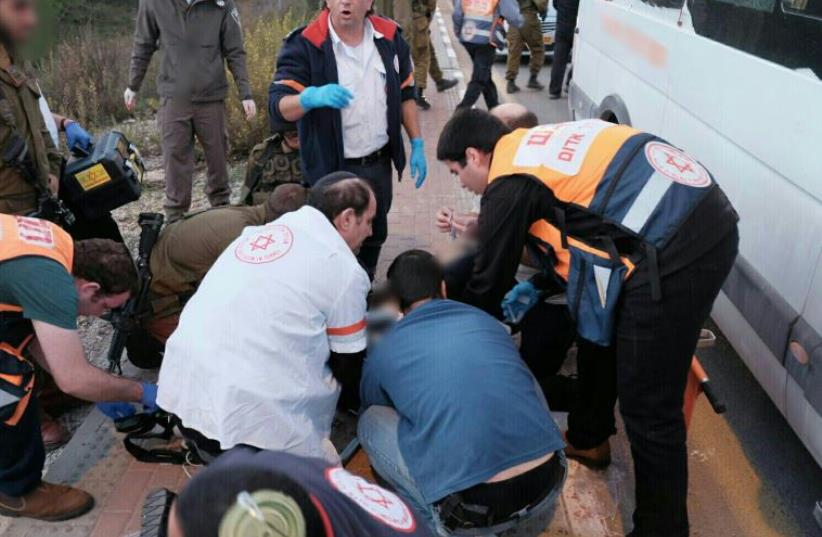 Paramedics treating victims at the scene of a terror attack in Gush Etzion in the West Bank on November 19, 2015
(photo credit: MAGEN DAVID ADOM)
Advertisement
Undergoing early psychological or drug treatment for post-traumatic stress disorder (PTSD) does not guarantee that victims of accidents, terror, war, the Holocaust and other traumatic events recover in the long term, according to a new study by psychiatrists of Hadassah University Medical Center in Jerusalem’s Ein Kerem and New York University Langone Medical Center.The majority of people with PTSD recover after early treatment -- but a substantial number still suffer for years after a traumatic event despite the early interventions, Prof. Arieh Shalev, former chief of psychiatry at Hadassah who continues to run a lab in Jerusalem and is a professor at Langone published in the latest online issue in the Journal of Clinical Psychiatry. Israel, which has many cases of PTSD, offers early treatment for the condition following terror attacks, but not long-term followup to ensure that the condition has passed.Over a 12-week period, researchers looked at several groups of civilians suffering from PTSD (a total study cohort of 232 individuals) after a single traumatic event. All participants received either prolonged exposure therapy; cognitive therapy; treatment with selective serotonin reuptake inhibitors (SSRIs); or a placebo pill one month after the traumatic event. They also followed individuals who declined treatment. All were reassessed at five months and 36 months.The study was performed by Shalev’s laboratory at Hadassah University Medical Center with researchers from Bar Ilan-University also collaborating; it was funded by the US National Institute of Mental Health via a research grant to Shalev.While the groups receiving prolonged exposure and cognitive therapy showed a significant reduction of symptoms by five months (61 percent better than the other groups), and their symptoms remained low for three years, the other groups – including those who declined treatment – reached the same level of low symptoms by three years. In that sense, early-prolonged exposure and cognitive therapy significantly shortened the time to recovery, but they did not reduce a three-year prevalence of PTSD.“We assume that people living in an otherwise stable environment would have better conditions for long-term recovery than individuals who experience lengthy wars or live in a constant state of violence,” said Shalev, the Barbara Wilson Professor in the psychiatry department at NYU Langone Medical Center, and a co-director of NYU Langone’s Steven and Alexandra Cohen Veterans Center.“This might explain part of their spontaneous recovery without initial treatment. However, what this study tells us at its core is that there is a significant public health challenge ahead. Individuals continually expressing initial PTSD symptoms, and who are resistant to early treatment, should be the focus of future research,” Shalev added.“They are the ones who remain chronically distressed and disabled and require care long after their traumatic incident. We need to find ways to identify these subjects, increase the early favorable responses to existing treatment, and find new ways to reduce the long-term burden of PTSD, who with his colleagues in Jerusalem developed a computational tool to identify individuals at high-risk for PTSD. In a study published last year in BMC Psychiatry, those at high-risk for PTSD could be identified in less than two weeks after they were first seen in an emergency room after a traumatic event.Some eight million Americans (civilian and military populations) develop PTSD in a given year, according to the US Department of Veterans Affairs’ National Center for PTSD. Trauma is also very common in women; five out of 10 women will experience a traumatic event at some point during their lifetime. Over the years, hundreds of thousands of Israeli civilians and soldiers, including Holocaust survivors, have developed PTSD.