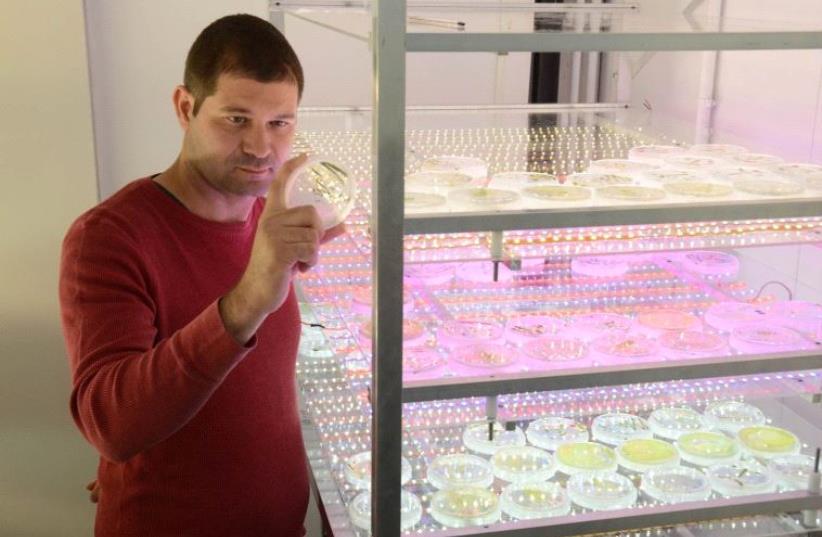 TAU's Dr. Iftach Yacoby and his algae
(photo credit: TAU)
Advertisement
Israeli researchers have transformed humble pond slime into an engine to drive a green energy revolution.Dr. Iftach Yacoby and his team at Tel Aviv University genetically altered single-celled algae, which naturally emit hydrogen throughout the day, allowing the organism to increase its efficiency to five times its natural ability.Hydrogen fuel cells are already being introduced into vehicles, and the new discovery could mean algae becomes a key player in the push for green energies.In the ground-breaking research, the scientists disproved the theory that micro-algae only produce hydrogen for a few minutes at dawn, producing only a minimal amount of hydrogen. Yacoby's team discovered not only that this was not the case, and that algae continue to emit hydrogen throughout the day, but that through genetic engineering they could radically improve the pond life's work rate. The discovery means that in the future it will be possible to grow micro-algae with conventional farming methods so that all the necessary energy can be produced on a larger scale.“Hydrogen is an energy source with huge advantages,” says Yacoby. “First, it has a tremendous energy content. The travel range of a hydrogen-powered car is more than 500 kilometers per five kilos of hydrogen, and an electric bicycle over 100 kilometers per 30 grams of the bicycle fuel. Secondly, hydrogen does not pollute at all. The process of using of electric fuel cell generates only water vapor, and exhaust emitted by a hydrogen-powered car contains only clean water that can even be suitable for drinking.”Yacoby noted that it is not a dream of the future, as the revolution of hydrogen motors is already taking place. In 2015, Toyota and Hyundai launched the production of Mirai (meaning “future” in Japanese) and Tucson cars powered by hydrogen gas. At the same time, electric bicycles are also being converted to run on hydrogen. Refueling stations using the gas are currently being built in Japan, Scandinavia, Germany and California, and scientists worldwide are looking for effective methods to produce hydrogen and create access to large volumes.Yacoby said that already in 1942, scientists had discovered that micro-algae – single-celled algae with a green color found in any pool of stagnant water – release hydrogen during photosynthesis. However, conventional wisdom until now held that very little hydrogen is emitted, so useful amounts of energy could not be provided.“Hydrogen is produced by algae with the help of an enzyme called hydrogenase that breaks down in the presence of oxygen,” explained Yacoby. At night, no oxygen is produced, and when the amount of oxygen decreases, the cell creates a large amount of hydrogenase. The assumption so far has been that for a few moments around sunrise, with exposure to sunlight, the algae produce both hydrogen and oxygen. But very quickly, the oxygen accumulates and paralyzes the hydrogenase, and hydrogen production stops. We decided to test this assumption.”To their surprise, the researchers found that even in the daylight, when the photosynthesis process occurs, the algae produce large amounts of oxygen and also emit a tiny amount of hydrogen. From this, they concluded that in the algae are areas with no oxygen that make it possible for hydrogenase to function. “Later we found in the algae three effective mechanisms that work tirelessly to remove the oxygen from the cell, allowing hydrogenase to produce hydrogen continuously throughout the daylight hours,” Yacoby said. “This makes it clear that algae have a huge underutilized potential for the production of hydrogen fuel.”In the next stage, the researchers used the familiar technology of genetic engineering to intervene in the photosynthesis of micro-algae. Their aim was to cause the cell to produce a greater amount of hydrogenase at the expense of other processes, such as production of sugar, thereby increasing the production of hydrogen. In this way, they were able to engineer laboratory micro-algae that produce 400% more than the original micro-algae.“Twenty thousand years ago, the agricultural revolution took place. Man ceased being a hunter-gatherer. He domesticated plant species from nature and began to grow his own food,” concluded Yacoby. “But when it comes to energy, we are still collecting from what nature gives us – so far mainly polluting fossil fuels, whose supplies are dwindling rapidly.”He predicted that his team’s discoveries “are an important step in a new agricultural revolution that could change the future of humanity – the production of clean energy in sufficient quantities to meet man’s every need. “In our lab, we have created strains of micro-algae that have the potential for mass production of hydrogen, and now the challenge is to deliver these capabilities to more durable strains that live in nature. In other words, the goal is to domesticate wild species of micro-algae, just as man domesticated wild wheat for his needs. Then we will be able to grow domesticated micro-algae and enjoy hydrogen-powered vehicles, and later, even use it to drive the wheels of industry.”
Sign up for the Health & Wellness newsletter >>