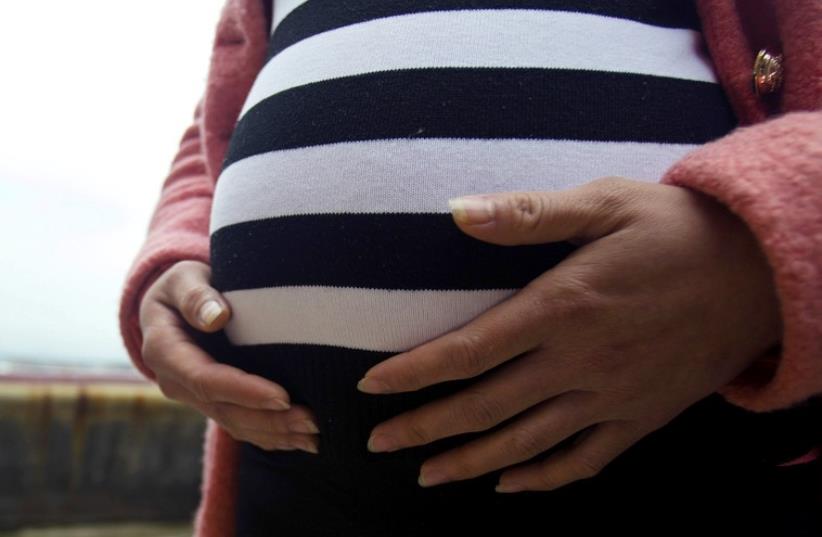 A pregnant woman
(photo credit: REUTERS)
Advertisement
Contrary to popular wisdom, inducing a pregnant woman’s labor after her waters break and amniotic fluid leaks out causes no harm to either her or the baby.A study by Dr. Liran Hiersch and Dr. Eran Ashwal – both of TAU’s Sackler School of Medicine and the Helen Schneider Hospital for Women at the Rabin Medical Center – has determined that natural, spontaneous deliveries and induced deliveries following the rupture of the amniotic sac in the mother have similar neonatal outcomes. The study was recently published in the Archives of Gynecology and Obstetrics.“Induced labor – the process of jump-starting delivery using prostaglandin – has gotten a bad rap. We found little justification for this” in the case of women whose water broke prematurely, said Hiersch. “People have an idea that everything natural is better, including childbirth. But induction is not necessarily more dangerous for mother and child than Mother Nature herself.”Most pregnant women are warned about artificially induced deliveries and told that induction may cause a low fetal heart rate, an increased risk of infection to mother and baby and uterine rupture or excessive bleeding after delivery. However, “we have found that induction produces healthy mothers and infants, with risk factors similar to those of spontaneous deliveries,” Hiersch said.The researchers evaluated the perinatal outcome of 625 women admitted to the Petah Tikva hospital after prolonged (24-hour) premature rupture of membranes or water breakage. Women who did not exhibit the spontaneous onset of labor within 24 hours from the moment their water broke underwent prostaglandin induction. These were then compared to those women who did develop the spontaneous onset of labor within 24 hours of being admitted. No significant difference was found between the groups regarding maternal age, parity and obstetrical complications.Women in the induction group were found to be at an increased risk for cesarean section, but researchers believe this was due mainly to blocked birth canals and not the induction itself.Artificial induction is a possibility for all expectant mothers who have approached two weeks past their delivery date, who experience high blood pressure or diabetes, have a uterine infection or simply haven’t had contractions despite their water having broken. These women are often hospitalized for 24 hours. But after this time has passed without natural delivery, most medical professionals will induce labor artificially to reduce subsequent risks to mother and child.“There is a palpable fear among women who are waiting for the contractions to begin,” said Hiersch. “They fear fetal distress, infection and umbilical cord trouble, but we have found no basis for their fears. These mothers should be assured that induced labor poses no increased risk to the health of their babies and themselves.”“This study gives us, medical professionals, the reassurance we require to continue doing what we do. We hope it will also reassure our patients, which is equally important,” Hiersch concluded.He is currently working on finding variables that predict which women may spontaneously go into labor following the premature rupture of membranes.
Sign up for the Health & Wellness newsletter >>