Weizmann Institute of Science researchers say research can be used for the early detection of such diseases as Parkinson’s and Alzheimer’s. 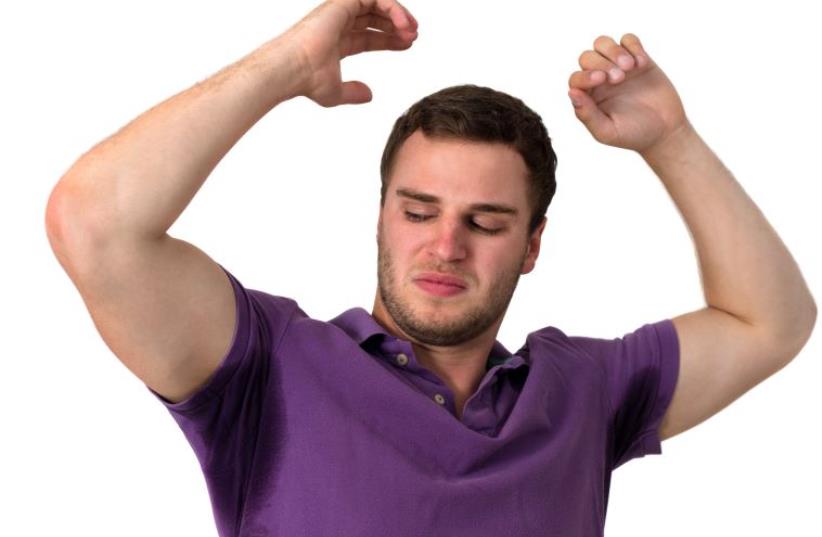 Man with Hyperhidrosis sweating very badly under armpit
(photo credit: INGIMAGE)
Advertisement
Practically every human being has his or her own unique smell – an “olfactory fingerprint” that could be used to identify any of the 7.3 billion people on Earth, according to Weizmann Institute of Science researchers who developed this fingerprint. They believe that just 34 different odors would need to be checked to do the job.The Rehovot researchers, who recently published their findings in the open-access journal Proceedings of the [US] National Academy of Sciences (PNAS), say that according to their computations, only 28 odors could be used to “fingerprint” some 2 million people and six more for all human beings.The implications of this study reach beyond the sense of smell alone and range from olfactory fingerprint- based early diagnosis of degenerative brain disorders to a noninvasive test for matching donor organs.The researchers think that olfactory fingerprinting, in addition to helping identify individuals, could be developed into methods for the early detection of such diseases as Parkinson’s and Alzheimer’s, and could lead to noninvasive methods of initial screening as to whether bone marrow or organs from live donors are a good match.Each of us has, in his or her nose, about six million smell receptors of around 400 types. The distribution of these receptors varies from person to person – so much so that each person’s sense of smell may be unique. In their study, they report on a method of precisely characterizing an individual’s sense of smell, which they call an “olfactory fingerprint.”The method is based on how similar or different two odors are from each other. In the first stage of the experiment, volunteers were asked to rate 28 smells according to 54 descriptive words, for example, “lemony” or “masculine.”The experiment, led by Dr. Lavi Secundo, together with Dr. Kobi Snitz and Kineret Weissler – all members of the lab of Prof. Noam Sobel of the institute’s neurobiology department, developed a complex, multidimensional mathematical formula for determining (based on the subjects’ ratings) how similar any two odors are to each other in the human sense of smell. The strength of this formula, said Secundo, is that it does not require the subjects to agree on the use and applicability of any given verbal descriptor. Thus, the fingerprint is odor dependent but independent of descriptors and language.The 28 odors make for 378 pairs, each with a different level of similarity. This provides us with a 378-dimensional fingerprint. Using this highly sensitive tool, the scientists found that each person indeed has a unique pattern. The next stage of the research suggested that one’s olfactory fingerprint may tie in with another system in which we all differ – the immune system. They found, for example, that an immune antigen called HLA – today used to assess matches for organ donation – is correlated with certain olfactory fingerprints.This part of the study was conducted together with Drs. Ron Loewenthal, Nancy Agmon-Levin and Prof. Yehuda Shoenfeld of Sheba Medical Center at Tel Hashomer.